Using their Voices: Olympic Athletes are Speaking out 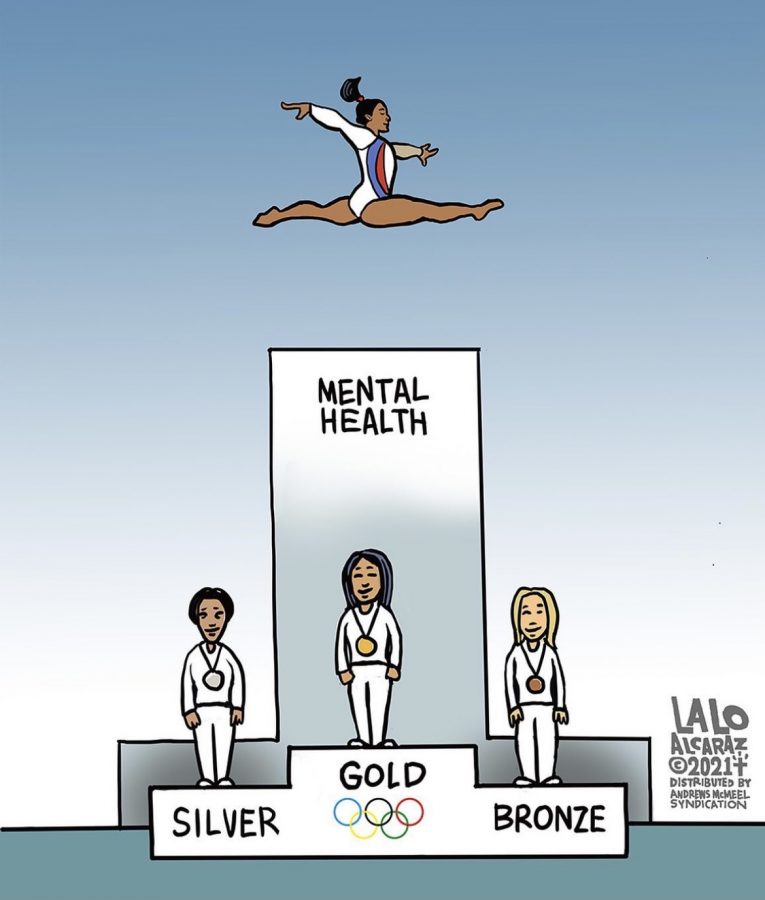 Artist Lalo Alcaraz shared this cartoon to his Instagram with the caption "Simone Biles wins again!"

The highly anticipated 2020 Olympic Games are almost finished, but the successes and messages of the athletes are not to be forgotten. Protesting was allowed by the International Olympic Committee (IOC) on July 2 this year. However, there were still some restrictions about when protests could happen—they weren’t allowed on the podium or during the introduction of the team or athlete.

One form of protest that the athletes have done is making gestures. On the first day of the women’s soccer competition, the British team kneeled, something promptly reciprocated by their Chilean opponent. Taking a knee has become a uniform sign of protest against discrimination and racism. This was also performed by the U.S. and Swedish teams.

Raven Saunders, the U.S. shot putter who won silver, raised her hands in an “X” on the podium, which is strictly against the rules set by the IOC. The organization said they are considering next steps on what to do. Saunders, who is Black and gay, said that the “X” stood for the intersection where oppressed people meet.

Some athletes protested through their uniforms. In women’s gymnastics, the German women’s team wore full length leotards as opposed to the shorter, bikini cut leotards, protesting the sexualization of women in sports like gymnastics. Similarly, the Norwegian women’s beach handball team wore shorts instead of bikini bottoms which is against the rules of the International Handball Federation (IHF) under section 4.8. Each player was fined 150 euros totalling 1,500 euros or 1,700 U.S. dollars. They, too, were protesting the sexualization of their team, as the men’s teams are allowed to wear shorts when competing.

The men’s U.S. fencing team also staged a protest against their own teammate. Fencers Jake Hoyle, Curtis McDowald, and Yeisser Ramirez wore pink face masks which contrasted the black mask of their teammate, Alen Hadzic, after he was accused of sexual assault by multiple women.

But what has been one of the most notable moments of the games is what Simone Biles, one of the most highly decorated gymnasts in history, did. She pulled out of the all around final and several individual events after a vault that many gymnasts warned could’ve had serious physical consequences. Biles confessed that her mental health was not where it should’ve been and that for her physical and mental safety she would not be competing.

Though this may not be classified as a full on protest, the importance of mental health and athletes has become a focus this year in sports media. There was an outcry of support for Biles from many athletes including Michael Phelps who has been an advocate for mental health after retiring from swimming.

“The Olympics is overwhelming,” Phelps stated in an interview with NBC sports. “There’s a lot of emotions . . . [Olympic athletes] carry a lot of things . . . and it’s challenging.”

Biles came back for the beam final and won a bronze.

Tennis star Naomi Osaka is another athlete who took her mental health into consideration; she shocked the world when she refused to speak to the press after the French Open.

The top athletes of the world are taking a stand about the issues that matter to them. The response to these messages determines what we actually value in these athletes. Do we value them as pure entertainment and believe they shouldn’t be involved in politics or social issues, or do we see them as people, just like us, who should have a say in the world?