The Bates Student • May 24, 2021 • https://thebatesstudent.com/22047/news/administrations-response-to-anti-israel-messages-draws-criticism-from-students/ 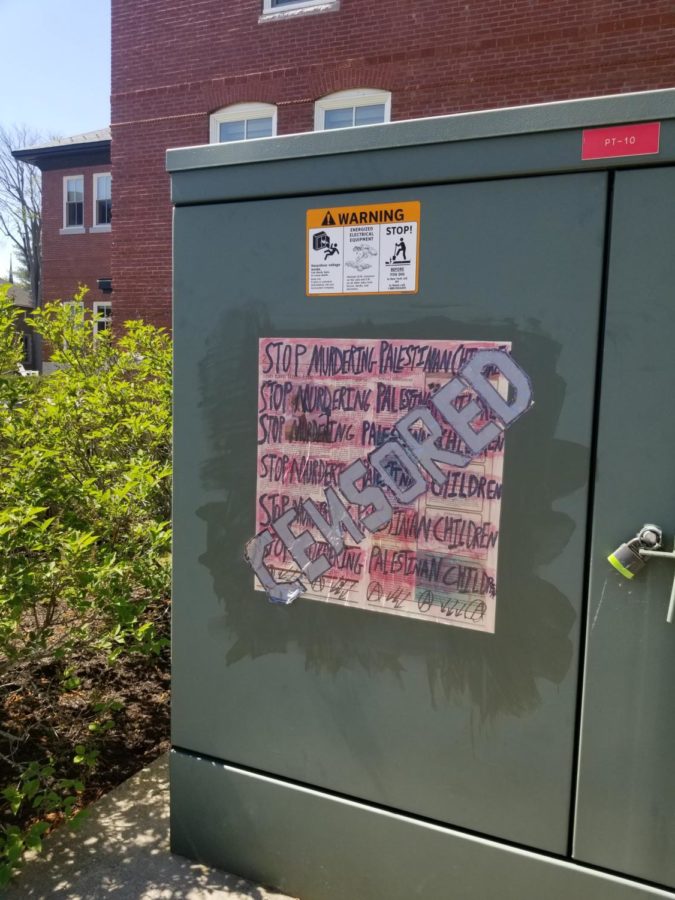 This photo, which was taken on the Alumni Walk side of Roger Williams Hall, was taken on May 17. The graffiti reads "Stop murdering Palestine Children" multiple times with "Censored" overlaying the text.

On Sunday morning May 9, chalk writing was seen under the library arcade and on Bates campus buildings, including Commons. The messages displayed were in support of Palestinians in relation to the ongoing Israel and Palestine crisis.

Bates is not the only academic institution where the Israel-Palestine crisis has become a contentious issue. Palestine Legal, an independent organization dedicated to protecting the civil and constitutional rights of people in the U.S. who speak out for Palestinian freedom, reported that about 80% of the 213 reported cases they took on last year were related to U.S. campuses, with students or faculty targeted at 68 different academic institutions.

These messages were prompted by escalations in the Israeli-Palestine conflict which has resulted in hundreds of deaths. A cease-fire has since been brokered, however relations between the two groups remain tense.

In response to the chalk at Bates, Title IX Officer Gwen Lexow released a message the following Monday which stated, “We have heard from a number of students and some families, expressing deep concern about the impact of the language contained in the flyers and graffiti, particularly on Jewish members of our campus community.”

Lexow followed with the information that Bates was conducting an investigation in partnership with the Lewiston Police Department (LPD) to “gather further information” and that they were currently working with Facility Services to erase the chalk. An initial investigation determined the messages did not meet standards to be investigated as a hate crime.

Many students were disappointed with Lexow’s email and the involvement of the Lewiston Police.

On Wednesday, May 12, Bates Student Government (BCSG) posted a message signed by various other student clubs and organizations criticizing the response from the Bates administration. “We strongly condemn the recent email sent to the Bates community which alienates Palestinian students by erasing their indigenous struggle, diminishes the pain of Muslim students who watch in horror as their holy site is besieged in the sacred month of Ramadan, and silences all other students exercising their freedom of speech in support of Palestine,” the post read.

Additionally, the post expressed concern for the communities of color, and specifically students who are brown, Arab, Middle Eastern, and Muslim, as they believed them to be the most likley targets of the investigation.

The message called it “deeply problematic” for Title IX to “disguise their violent policing of students” as a counter to antisemitism when in the past they have failed to protect Jewish students in the past. They reference a reported video that was posted of a student performing the Nazi salute a couple of months ago, which did not receive a public statement from Bates administration, as evidence of this neglect.

Ilana Rosker ‘23, an active member of the Bates Leftist Coalition (BLC), a group of leftist & anti-capitalist voices at Bates and who signed the statement issued by BCSG, regarded  Monday’s email from Lexow as “incredibly tone-deaf and apologist.” Rosker added that she wished the Bates administration would “name what is happening in Palestine right now: a biopolitical, necropolitical, settler-colonial project of ethnic cleansing, and truly grapple with and see how that project is intimately intertwined with Bates’ self-identification as an ‘anti-abolitionist, anti-racist’ institution.”

Alongside Ellie Vance ‘21 and Solaine Carter ‘21, Rosker created an informal coalition of students and alumni called “Jewish Voices for Peace in Palestine,” who also signed the BCSG statement. Since the Jewish Student Union (JSU) did not want to sign the statement, these students created this informal coalition of anti-Zionist, anti-imperial, and anti-settler-colonialist Jewish advocates.

“As a Jew myself, I know how instrumental the Jewish voice is in this conversation,” Rosker told The Student.

A representative for JSU did not return an email request for comment.

Alexi Knight ‘23, a member of the Restorative and Transformative Justice Coalition (RTJC), also found the email from Lexow and the actions of the administration disappointing. RTJC is a student-run organization founded by the Mediation and Restorative Justice Fellows
(MRJ), as they felt it was necessary to form a group unattached to the administration in the way that MRJ is. BLC reached out to RTJC asking if they were interested in also signing the BCSG statement to which they “were glad to do.”

“The graffiti should have never been referred to as a hate crime and should have instead started a conversation about what we as an institution can do to support Palestine, as well as any members of our campus community who may be affected,” Knight said.

OutFront — a group focused on promoting and maintaining LGBTQ+ visibility, solidarity, and support — was another organization that  signed BCSG’s statement. Claudio Jimenez ‘22, one of OutFront’s most prominent members, said that although the leaders of the group cannot speak on behalf of all its members nor the entire LGBTQ+ community on campus, the liberatory struggles from gay liberation to Palestinian liberation are inseparable. “In my personal opinion, no one is free until everyone is free,” Jimenez remarked.

Students not directly affiliated with clubs or organizations also spoke out against Lexow’s email and the administration’s response to the chalking.  In the days following the chalking and the email, Ayah Ghazi ‘23 became a prominent voice in speaking against the actions of the administration.

Not long after Lexow sent the email on Monday, Ghazi sent a response to Lexow where she expressed her disappointment and shame she felt attending Bates.

“As a Palestinian-American student who has watched her family suffer under the occupation of the Israeli government, I feel ashamed to attend an institution that has yet to take a meaningful stance on what is happening in Palestine as we speak and ashamed to belong to a school that can’t stand up to basic human rights,” Ghazi wrote.

Ghazi told The Student that she decided to send the email to Lexow because of its apparent “selective activism” by offering support to Jewish students and not for those who are grieving for Palestinian families.

“Also, Gwen cannot assume that the Jewish community is a monolith in which every Jewish student on this campus expresses the same concern that anti-Zionism is antisemitism,” she said.

Screenshots of Ghazi’s email circulated around social media pages during the days after it was sent, and many students reposted the email on their Instagram stories to share their support.

When asked what the Bates administration could have done differently when the chalk first appeared, Ghazi said they should have educated themselves before sending an email out to students. “Policing the voices of students who are protesting against genocide should be considered the hate crime in this case,” she said.

On Friday May 14, Lexow sent another message to the Bates community, this time announcing the termination of the investigation and offering an explanation for the college’s actions. Lexow detailed the events leading up to the initiation of the investigation, communicating that the college received a call from someone who reported an antisemitic hate crime had occurred on campus in reference to the chalk on Commons. The email did not specify whether that someone was a student or another community member.

Since a hate crime was reported, the college was required under the Maine human rights law to verify the chalk writing did in fact exist and inform LPD. The LPD then informed the Maine Attorney General who was responsible for completing the case’s review. The Attorney General’s office then determined that the case did not require further investigation and it was subsequently closed.

“It is important to understand that the process is required, and it is designed to make certain allegations of hate crimes are not ignored or dismissed,” Lexow wrote.

In Friday’s email, Lexow also announced that on the following Thursday, May 20, the Office of Equity and Inclusion and the Multifaith Chaplaincy would be holding space for grief and healing.

“This has been a difficult week on campus, and deeply painful for those who have connections to Israel and Palestine and who have Islamic, Arab, and Jewish identities … I hope that we can begin to seek each other out for support and compassionately acknowledge and engage with the challenges and pain of this moment,” Lexow concluded.

Despite the administration’s attempt to clarify their actions and Lexow’s previous email, many students were still upset and felt that the second email was unsuccessful in regaining their support.

“Prominent Palestinian student advocates simply sought an apology. They did not receive one. Thus, the second email failed,” Rosker told The Student.

More chalk carrying similar messages appeared on campus buildings again on Monday, May 17. When The Student asked if the administration was willing to comment on the new chalk writing, they chose to provide no comment and emphasized the opportunity for students to share their perspectives on May 20.

“The first course of action Bates must take is a public apology along with a show of support to the students who were completely disregarded in the first email sent by Gwen Lexow,” Ghazi advised. “Bates must create a permanent safe space for students of middle east origin [sic] to feel welcomed and included.”

Resources to learn about Israel/Palestine Crisis:
The Jewish Voice for Peace Website

For More Resources Visit this Link