The Bates Student • May 12, 2021 • https://thebatesstudent.com/21996/features/theme-house-seeks-to-advocate-support-international-first-gen-students/ 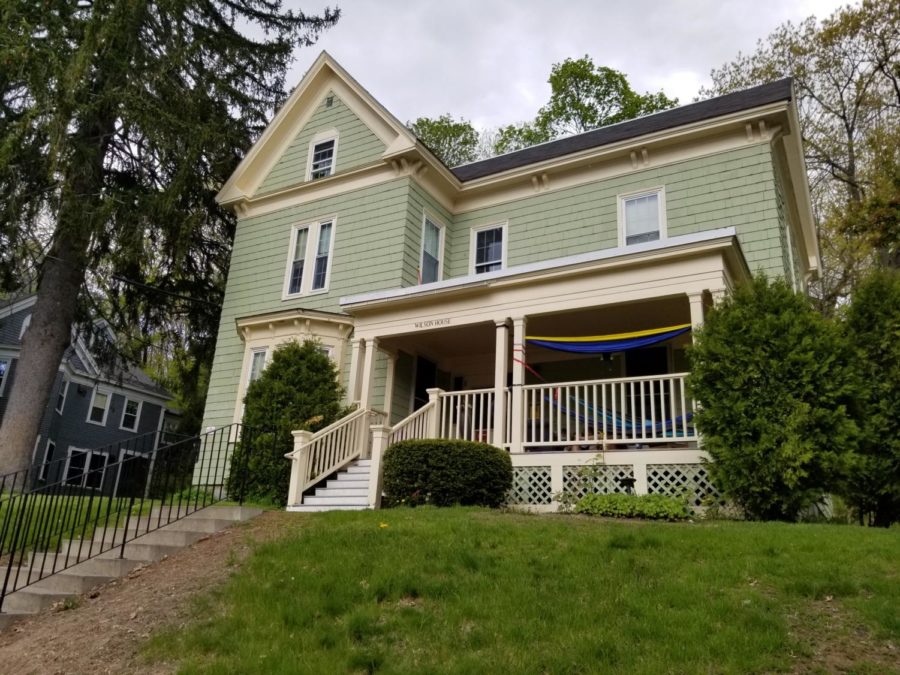 “All the efforts involving interculturality really starts in the residential experience. We come to study here, but we also live here. So it’s important to our overall well-being.” - Marcos Pacheco Soto '24

“Activism takes energy,” first-year Marcos Pacheco Soto shared with The Student. “And the lack of support structures is a barrier to sharing experiences, feeling supported, and advocating for change.”

Kush Sharma ‘23 of Delhi, India and Marcos Pacheco Soto ‘24 of Santiago, Chile felt the lack of a comprehensive support system at Bates for international students, first-gen students, and first-gen American students, so they decided to address the gap by proposing a new theme house, “Intercultural Diversity.”

Students who applied for this theme house will be living in Wilson House on Frye Street. Associate Dean of Students for International Student Programs, James Reese, will serve as the faculty advisor, or residential fellow, for the house.
Advocating for Change & Better Support Systems
According to the Bates Residence Life & Health Education website, the Intercultural Diversity House “advocates for building a comprehensive supportive community system for international, first-generation, and the overall student community at Bates College. It will serve as an instance for the college population to engage in insightful conversations about diversity, citizenship, and intercultural experiences.”

“There’s a lot that we all relate to but everyone is dispersed [across campus],” Sharma said. His hope is that this house will bring students together from across campus and serve as a safe space for those who face the same challenges or share the same goals in terms of fighting systems of oppression.

Pacheco Soto added, “When people don’t feel safe sharing their experiences by themselves as individuals, it’s good to have a platform behind them. This house could do that by helping students advocate for themselves.”

In the process leading up to the creation of this theme house, Sharma and Pacheco Soto, along with several other international and first-gen students, started talking about “an advocacy union and how underrepresented communities can find their space at Bates.”

Dean Reese sent out an email on the international listserv to gauge interest and gather feedback. The Intercultural Diversity house was just one of the potential action plans, but it has proven to be a successful one.

According to Sharma, over 50 people applied to live in the house. Wilson House is one of the largest on-campus houses with 27 beds and the number of applicants was twice as many students as the house could accommodate. Nevertheless, the coordinators were able to find a good balance of American students, first-gen Americans, and first-gen to college students. Approximately 60% of the residents are international students, and the majority are from the class of 2024.

According to Assistant Director of Residential Operations, Jessie Williams, the Housing Office takes into account the roster of the proposed theme houses, and once they have an idea of the size building they will need, designate an appropriate house.

“In most recent years this has always been low 20s or teens, thus Webb, Pierce, Nash, and Chase have all been used recently,” she shared. However, Williams said that nearly every house on Frye Street has been used as a theme house, as well as many of the houses that used to exist on Wood Street, in addition to the lots across from Purposeful Work that were houses prior to the construction of Chu and Kalperis.

“We do like to rotate houses, if possible,” Williams said.

“We have not had a proposed roster as large as [the Intercultural Diversity House] in a few years,” she added. “It is really hard to get more than 25-30 students committed to a theme house, so their large roster alone tells us that this is a theme students want to have. I’m really excited to have some new theme houses this coming year as we know community and connection have been hard for students during the pandemic.”

Sharma echoed this sentiment. “The overwhelming support [for the house] shows that people want something [like this] from the institution that supports them in their undergrad experience.”

His hope is that the house can serve as a “safe haven” while still being an inclusive space for residents and non-residents who share common goals and value cultural diversity.

According to Pacheco Soto, the grassroots organizing that led to the creation of the theme house was a way to start doing something in the short-term while also pushing for longer-term institutional change.

“All the efforts involving interculturality really starts in the residential experience. We come to study here, but we also live here. So it’s important to our overall well-being,” he said.
Programming Plans
“We have big plans and goals, but we have to start small,” Pacheco Soto said. One question he and Sharma are grappling with is how they will translate the goals of their theme house into an interest shared by other students on campus.

Regular house meetings are something that both Pacheco Soto and Sharma said they missed in their own residential communities, which is why they plan to bring everyone together once a week, possibly over dinner, to share a moment of gratitude and catch up with one another.

Other programming ideas include a film festival featuring films from the countries and languages that are represented in the Intercultural Diversity House. Cooking and food-related events are also going to be an integral part of the house programming, and the coordinators intend to reach out to immigrants from the Lewiston-Auburn (L-A) community with the help of the Harward Center for Community Partnerships. They also plan to collaborate with the Office for Intercultural Education (OIE) and the Center for Global Education.

Pacheco Soto and Sharma have also contemplated starting a language learning program open to everyone at Bates, although they pointed out that these events will require input and energy from non-residents too, particularly if they organize students according to a “buddy system.”

In addition to being the theme coordinators for the house, Sharma and Pacheco Soto are the recently elected Bates College Student Government (BCSG) co-presidents for the 2021-22 academic year. Sharma said that he and Pacheco Soto may host pizza or chai chats at Le Ronj for students interested in bringing student government-related concerns or inquiries to either him or Pacheco Soto.

When asked whether they anticipate any conflict of time or interest as BCSG leaders, both Sharma and Pacheco Soto emphasized that they see their role as theme house coordinators and co-body presidents as complementary to each other. While it will require more work, time and energy on their end, Sharma said “it aligns with our ideology and what we want to do.”
Strengthening Community & Building Longevity
“It can be isolating to study and live at a predominantly white institution (PWI),” Pacheco Soto said. “This house could provide a space to fight that isolation and [generate] schoolwide conversations.”

In their campaign and policies they’ve spent time talking with the OIE, faculty, staff, and the larger L-A community and they intend to continue this work next fall. Additionally, Pacheco Soto pointed out that through their platform with BCSG, they will be able to gather more resources.

Pacheco Soto and Sharma are also looking forward to collaborating with the other theme houses, Empowering Young Minds (Nash House) and Environmental Justice and Awareness (Chase House). “They also want to fight the same oppressive system,” Pacheco Soto shared. “We would love to connect with them, collaborate, work and grow together.”

“I don’t see this house dying, even in the next year or two,” Sharma said. “We want to work on a concrete two, five and multi-year plan to ensure the longevity of this house and that it can offer space to make this community think, to make people more aware, build spaces that are less white, and move beyond the white, wealthy, privileged normal.”

“This house really represents a place where I want to live,” Pacheco Soto said. “It’s nice to see that at the end of the day I can go back to a house with people that understand what I’m feeling and vice versa. That I can be there for people and live in a safe space where I can rest.”