The Bates Student • May 12, 2021 • https://thebatesstudent.com/21983/arts-leisure/food-and-forgiveness-a-review-of-grand-concourse/

Food and Forgiveness: A Review of Grand Concourse 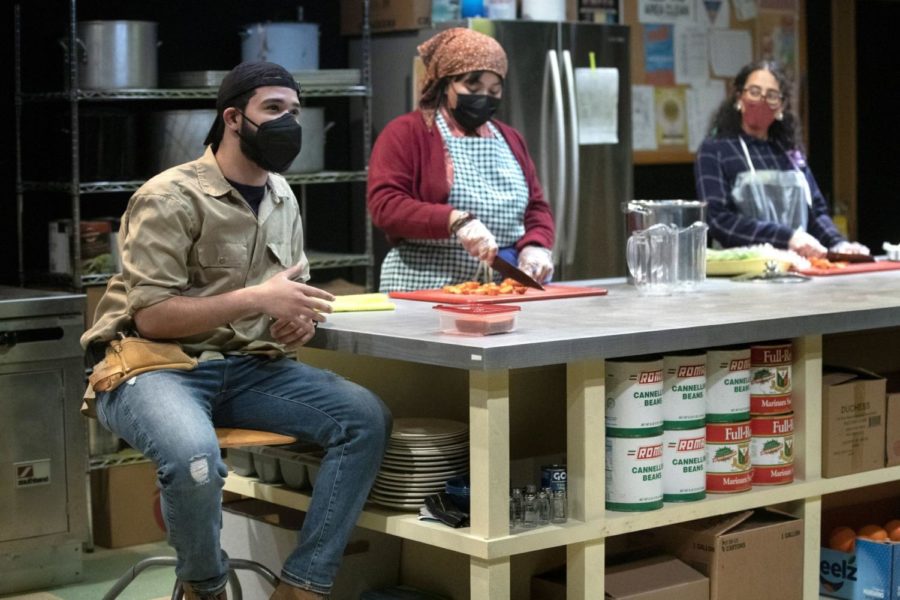 At the start of her shift, chef Shelley, played by Perla Figuero ‘21, starts the timer on her microwave and recites the following prayer: “I pray for all people, for all places where there is war or famine, I pray for our community, for justice for immigrants.” Feeling exhausted and hopeless, she gives up on her worship, asking for forgiveness.

“Grand Concourse,” a play written by Heidi Shreck and directed by Nicky Longo ‘21, is a work that demands its viewers to reflect in the same way; it explores how our intentions align with their impacts and how far we can extend ourselves in our ability to forgive.

“Grand Concourse” tells the story of a soup kitchen in the Bronx, N.Y. The kitchen’s head chef, Shelley, runs a notoriously tight ship but is grappling with the guilt of losing passion and drive for her job. At the onset of her misgivings, she meets Emma (Emily Diaz ‘23), an unpredictable college dropout who begins working at the kitchen. Emma and Shelley are accompanied by Oscar (Darwin Silfa ’21), a cool and confident maintenance worker, and Frog, a spirited, frequent customer of the kitchen played by Professor of French and Francophone Studies Kirk Reade.

Throughout the play, audience members see the way that characters of contrasting attitudes and backgrounds come together when dealing with their own internal conflicts. Emma’s struggle with mental illness and the stage of tumult she is in in her life clashes with Shelley’s stringent adherence to consistency, demanding that the characters have no choice but to learn from each other or remain stuck in gridlock.

A scene that exemplifies the difficult relationships between the kitchen workers is when it is revealed that Emma has been lying about the fact that she is suffering from cancer, and the rest of the characters are forced to grapple with the false image that she was projecting to them throughout their relationship.

Each role within the four-person production quite literally brings a different perspective to the table — the centerpiece of the play’s set features a counter in the middle of a fluorescently lit room, which is the sole location in which the play takes place. This setting was made especially intimate due to the COVID-19 occupancy limits for the play, which only allowed nine students at a time into the Gannett Theater to view the show.

Viewers were made to feel like flies on the walls of this kitchen, peering into intense and utterly human interactions going on inside. The only allusion to the outside world was the sound effects of soup kitchen patrons lined up outside of the swinging doors, a reminder of yet another dichotomy within the play — those who assumed the position of volunteers, and those who were on the receiving end of their work.

Editors Note: “Grand Concourse” was directed by Nicky Longo ‘21 for his senior thesis, and is but one example of the impressive productions put on by graduating students within the theatre department. For more information on upcoming performances, check the announcements on Bates Today, or follow the Bates Theater and Dance instagram page, @bates.theater.dance.