The Bates Student • May 12, 2021 • https://thebatesstudent.com/21976/features/meet-bcsg-co-presidents-kush-sharma-and-marchos-pacheco-soto/ 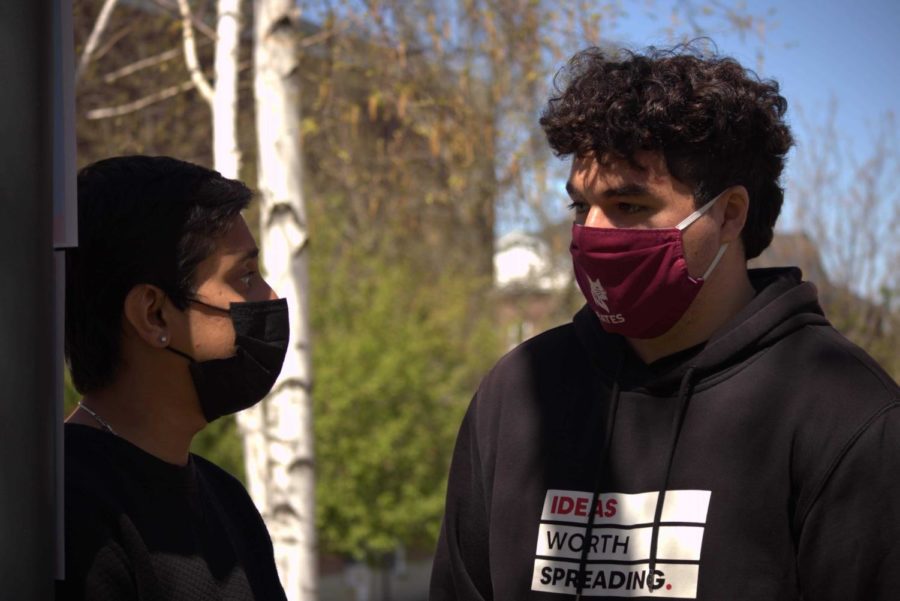 The Bates Student sat down with newly-elected Bates College Student Government (BCSG) Co-Presidents Kush Sharma ‘23 and Marcos Pacheco Soto ‘24 to learn more about the pair, the election (and re-election) and their plans and aspirations for the upcoming year.


Why They Ran
Before Sharma approached Pacheco Soto about running as co-presidents to lead the BCSG, Pacheco Soto’s intentions were simply to run as a class representative for the class of 2024 because he felt “it was necessary … when things can be done and you feel empowered to drive change in the school, then you should just go for it.”

As an international student from Chile who attended high school in China, Pacheco Soto was focused on learning English during his formative years, so he wasn’t involved in high school student government. However, once he arrived at college, he felt empowered to join, noting “here at Bates, there’s a lot of things that could get done, and I want to be part of that change.”

Running as a first year to co-lead the student government was notably intimidating. “Not many people already know you, and it’s not something that freshmen usually do,” he explained. “I was, of course, a little scared of breaking that stereotype, but definitely, I don’t regret it at all, especially now that we pulled it through and we won.”

Pacheco Soto met Sharma, an international student from India, thanks to mutual friends, and they bonded over being international students in the U.S. and having both attended United World College schools in different countries. As a result, “it was very easy for us to understand each other and our work … and reach consensus out of our differences,” Pacheco Soto said.

Their decision to run as co-presidents emerged following conversations between the two surrounding what they liked and disliked about Bates, which left them wondering how they could actually create feasible and immediate change on campus.

“All of it was founded on the principles that there are several things about Bates that need to be changed and how do you go about changing them? By actually just putting yourself out there and going right at it,” Sharma said.

Sharma, who is a sophomore, already had previous experience working in the BCSG as a representative for the class of 2023 during his freshman year. However, he felt that “whatever we were already doing … would have more impact if we do it through a position that’s so recognisable [and] connects you with groups of people that would usually be hard to connect with.”

Sharma was also inspired to run following a difficult and isolating summer where he even considered transferring. “Personally for me, Covid summer was very difficult. I felt very left out, like Bates didn’t care about me,” he said. “I was at a point where I was so close to transferring.”

Sharma’s previous mindset completely shifted, and he remembers thinking to himself, “I’m going to address those issues. I’m going to work for the Bates students and for myself and try to change those things rather than running away from [them].”
The Election
The BCSG presidential election results were announced on Apr. 20, and Pacheco Soto and Sharma placed second. Two days later, on Apr. 22, Campus Life declared the decision void due to an error allowing seniors to vote and announced a re-vote would take place.

Following the voided results and the re-vote announcement, Pacheco Soto remarked that “it was very stressful, I’m not going to lie, I was in a very uncomfortable position. It was a very tough spot to be in considering that our ticket and the other ticket were really tight.”

Sharma and Pacheco Soto were concerned how the re-vote would be perceived by the student body.

The next week, on April 28, Pacheco Soto and Sharma were announced as the official co-presidents for the BCSG for the 2021-2022 school year.

Following the results, Pacheco Soto mentioned that he spoke to the previously elected candidates to clear the air. “I didn’t want to make this an awkward situation between us. At the end of the day, this was a human error that happened.” However, he said, “I don’t wish [a re-vote] to anyone who’s running for BCSG at Bates.”
Younger Leaders
As a rising sophomore and a rising junior, Pacheco Soto and Sharma are on the younger side of BCSG leadership. However, they have taken this potential challenge in stride and, instead, see this as an opportunity for growth and fresh ideas. As underclassmen, Sharma explained, “we are in a position where we have the time and the energy to put into this position and use this in the best way possible.”

“It’s about the intention. It’s about what you’re doing,” he expressed, so “I feel like we are prepared, even though we are not upperclassmen.”
Planning for the Upcoming Year
Pacheco Soto and Sharma plan on closely following the six key points they campaigned on. Their first order of business in their administration is centered around participation and open government. They are very focused on making the BCSG a true democracy that is “actually of the people, by the people, for the people,” Sharma said.

To do so, the pair plan to “open the doors of the BCSG to the students to really amplify their voices and really embrace what they have to say,” Pacheco Soto said. “I’m never going to put my ideas over the ideas of the majority of the student body.”

They hope to create both structural ways, such as working with clubs around campus and building a network across e-boards, as well as informal ways, like sitting outside commons free to chat and to hear student input, suggestions, and ideas.

In addition, the BCSG plans to revise their constitution in order to encompass these new goals.

The two new presidents told The Student they also hope to assist the transition to a COVID-19 free campus, tackle concerns about Campus Safety, help support the incoming first-years and rising sophomores as they adjust to a post-pandemic life, continue the anti-racism and equity work started by this year’s student government, and to more strongly focus on social justice issues and migrant advocacy.

Pacheco Soto believes it is necessary that “the student government has really taken the job of being an activist,” which they plan to continue to work on for the year ahead.

In addition, as international students, in an immigrant populated city in Maine, the two plan on listening to the Lewiston/Auburn community and “working towards more advocacy,” Pacheco Soto said.
Their Legacy
Sharma and Pacheco Soto hope to leave a memorable legacy in which their goals are not only expanded upon and constantly improved, but the BCSG can truly be known as a place for open governance, where everyone’s voices are heard, validated and taken into account.

In addition, the pair hope to continue the legacy of the previous leadership by ensuring the critical race theory requirement is implemented, something Pacheco Soto feels very passionately about.

“I would love to see that when I’m a senior, and I’ll leave this place,” he said. “That’s what I’m aiming for.”