The Bates Student • May 12, 2021 • https://thebatesstudent.com/21969/news/students-gather-to-defund-and-disarm-campus-safety/ 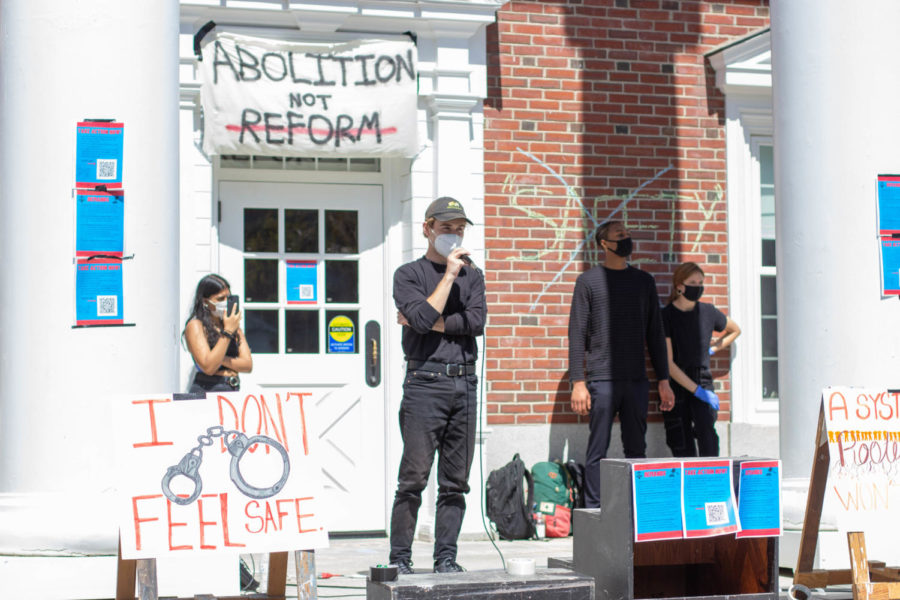 More than 100 students gathered outside Lane Hall on Friday to protest Campus Safety’s policies. The rally, which was promoted and facilitated by the Bates Restorative and Transformative Justice Coalition (RTJC) and the Bates Leftist Coalition (BLC), aimed to pressure the administration to “defund and disarm” Campus Safety.

In an Instagram post, RTJC listed four goals for the event: transparency of decisions made over the summer in the Campus Safety office; the commitment to stop handcuff usage by summer; an acknowledgement from the administration about the harm that students, specifically Black and Brown students, have experienced; and a complete Campus Safety funding freeze. Organizers told the crowd they demand a response from the administration by May 25.

The protest occurred soon after Vice President of Campus Life and Dean of Students Josh McIntosh issued an official response to a previous petition circulated by both groups asking for Campus Safety to not implement body cameras or use batons and handcuffs. McIntosh wrote that the office would no longer use batons, however he did not commit to retiring the use of handcuffs. In addition, he shared that Bates never committed to employing body cameras.

Organizers claimed to have invited Spencer, McIntosh, and Senior Associate Dean of Students Carl Steidel to the event, though they did not appear to be physically present. The rally was also live streamed on the RTJC Instagram account.

Many student speakers, including Ashka Jhaveri ‘22, expressed disappointment in the college’s response to previous complaints about Campus Safety, including to an incident in 2017 where a black student was restrained and handcuffed.

“The administration has had so much time to sit with student stories,” she told the crowd.

The criticism extended specifically to Spencer and Steidel. Owen Schmidt ‘22 said both administrators were “complicit” in “coddling” Campus Safety.

Schmidt also told the crowd he believes students who have worked in the food service industry have more de-escalation training than many of the campus safety officers. In a previous interview with The Student, Director of Campus Safety Paul Menice stated that the office conducts de-escalation training at least once a year.

Schmidt cited a lack of outreach by the administration as a key component of the protest.

“All we want to see is effort by the Bates administration,” he said.

The two new co-presidents of the Bates College Student Government (BCSG) Kush Sharma ‘23 and Marcos Pacheco Soto ‘24, who ran on a platform of abolishing Campus Safety, also spoke. Pacheco Soto urged protestors to keep making their voices heard to “an institution that is nothing without us.”

Sharma, who oftentimes refuses to call the office “safety” and instead refers to it by its old name, “security,” said the institution was “fundamentally flawed,” and urged the administration to be “a little more compassionate.”

The Student spoke to Sharma during the rally, where he further explained how he and Pacheco Sotoplan plan to keep their promise to voters to abolish Campus Safety.

“There are a lot of things that we’ve been chatting about,” he said. “We want to support groups like the BLC and [Black Student Union].”

They also plan to create an additional committee within the BCSG to explore solutions to end what he refers to as a “cycle of abuse” perpetrated by Campus Safety.

“Ultimately, Marcos and I imagine the role of Campus Safety as not one that deals with students at all, only outside threats,” Sharma said. “The ultimate goal is abolishment, and supplementing the responsibilities with the [Residence Life] team.”

In addition, Sharma stated that he did not agree with the email sent by McIntosh in response to petition demands, though he believes it is a “campus conversation.”

“This is an important concern that we can’t just brush off,” he concluded.

Eric Fleischmann ‘23, an organizer of the event, told The Student he believes the protest was successful.

“I think what we accomplished here today is showing the Bates administration that we’re not going to let up or go away,” he said.

After the student speakers concluded, organizers led the protesters into Lane Hall to march to Spencer’s office and deliver a handmade banner. Multiple protest leaders took large drums into the building in an attempt to make noise and cause disruption, though it appeared that all administrators were working remotely.

It is unclear what the administration’s response will be, but Fleischmann is committed to continuing the fight into next year if necessary.

“We showed that we can mobilize the student body,” he said. “And we can do it again.”