The Bates Student • May 12, 2021 • https://thebatesstudent.com/21966/arts-leisure/deons-twelfth-night-dazzles-audience/ 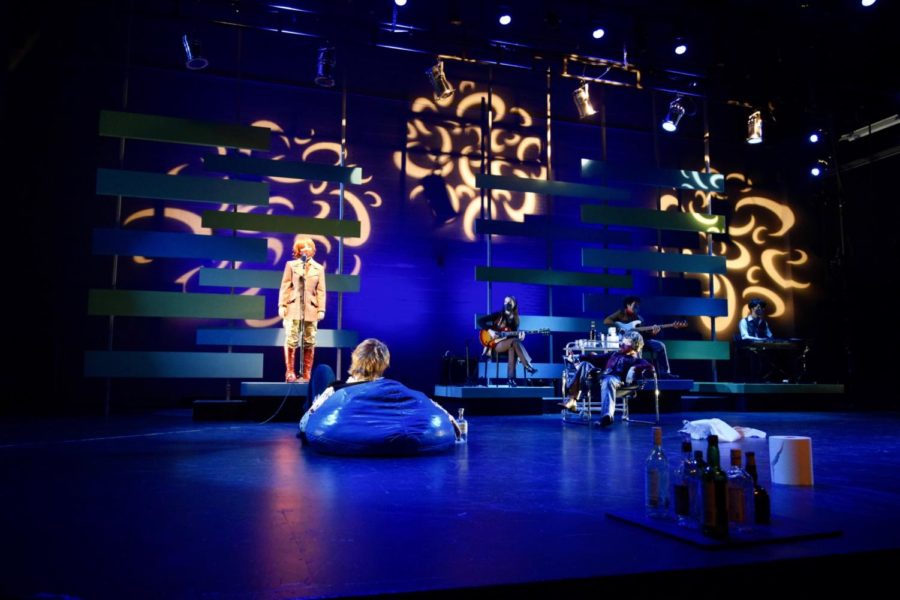 When going to a Shakespeare play, one may expect to be hushed early on and to remain in one’s seat — at least the plays I have been to. What one may not expect when waiting for the show to begin is to be asked by the actors on stage to join them in a game of pong sans the beer. But that is exactly what Deon Custard’s ‘21 adaptation of Twelfth Night asked.

This classic Shakespearean comedy centers around twins Viola and Sebastian, who have been separated by a storm. Viola, presuming Sebastian to be dead, decides to take a job as a steward for Duke Orsino. Viola takes the name Caesario and disguises herself as a man. Comedy ensues when Caesario is tasked with going to the countess Olivia and asking if she would be interested in marrying Orsino. Olivia is not interested, but instead falls in love with Viola, while Viola is falling in love with Orsino.

A sub-plot consists of Olivia’s chambermaid Maria conspiring with Olivia’s Uncles Toby Belch and his friend Sir Andrew Aguecheek and Feste to make a fool out of Oliva’s steward Malvolio who is persistently condescending to the other characters.

Furthermore, Sebastian has been alive this whole time and has been with Antonio, a sea captain, who saved him from drowning.

Of course there is much more to discuss about this almost two hour play, but the actor’s and Custard’s choice of time period stands out.

Custard’s Twelfth night begins with a performance by Feste, the clown, and his band (yes there was a live band) all dressed in 60’s wear performing classics of the 1969-1970 time period in which the play was set. The fact that Feste and the band performed on raised platforms set the mood for a night that was sure to bring unexpected turns.

Feste, played by The Student’s own Sadie Basilia ‘23, serenaded the audience throughout the show. Her characterization of Feste as a sarcastic, red ruby boots wearing orange hair singer was a joy to watch on stage. Her gorgeous singing voice was always fun to listen to as well.

Katie Abramowitz ‘21 played Viola as a woman not necessarily pretending to be a man but instead showing a different side of herself. As Cesario, she played the role effortlessly showing the delicateness that Viola has, but also the tenacity that she couldn’t show as a woman.

Caleb Ireland ‘23 as Sebastian was fun to watch on stage as an overly dramatic guy, and was strangely positive for a man whose only surviving family is presumed dead.

Johnny Esposito ‘22  played the lover of love itself, Duke Orsino. He was brilliant in his role as a flamboyant and at times childish man led to some hilarious moments.

Alex Gilbertson ‘22 played Olivia and was amazing in her role. Gilbertson gave Olivia more dimension as she was able to go from a stern leader to a woman just trying to connect with someone she is interested in.

Brady Chilson ‘23 showed the audience how versatile of an actor he is as he both played the pompous, power obsessed Malvolio and Antonio, an admirer of Sebastian. His ability to switch between the two characters so effortlessly was a joy to watch.

Sydney Childs ‘24 and Ezra Clarke ‘21 played Aguecheek and Belch respectively. As one of her first roles at Bates, Childs impressed with expressive body movements and clear voice acting talent. Clarke showed the audience a drunk, bumbling fool who simply wants everyone to enjoy themselves. A commanding presence on stage with his projection told the audience to always pay attention.

Maggie Nespole ‘23 playing a sassy and no holding back insults Maria always made me smile.

The lighting, sound, set, and the arrangement of the music were brilliant thanks to the people working behind the scenes making Custard’s Twelfth Night a fantabulous show.

Custard got the idea for this production while taking Introduction to Design, where everyone reads “Twelfth Night.” While reading the Act II scene in which Feste sings the song “O’ Mistress Mine,” David Bowie’s “Starman” came on. Custard explained in his director’s note how he “realized the uncanny ease with which Shakespeare’s words flowed alongside Bowie’s. In that moment the seed of [this production] was planted.”