The Bates Student • May 5, 2021 • https://thebatesstudent.com/21887/forum/recognizing-indigenous-people-and-missing-and-murdered-indigenous-womxn-and-girls/ 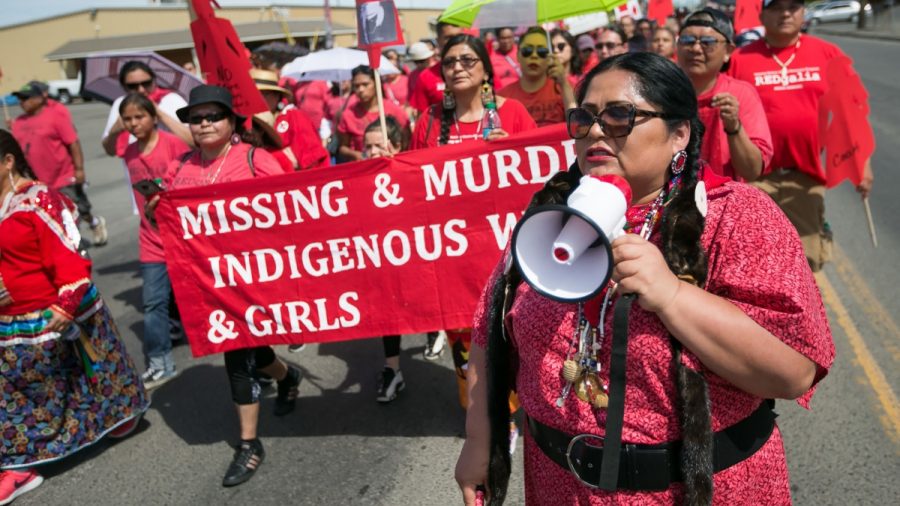 Female identifying indigenous people suffer significantly in the United States. The National Crime Information Center has reported more than 5,712 missing American Indian and Alaska Indigenous Womxn and Girls. Despite this, only 116 cases were officially logged by the U.S. Department of Justice federal missing persons database.

In addition, the Justice Department reports that one in two Indigenous womxn will be raped or seually assaulted in our lifetime. 92% of young Indigenous womxn who have had intercourse have reported, at some point, having been forced to have sex against their will, according to the Indigenous Kinship Collective. Furthermore, more than 90% of sex crimes on reservations are committed by non-Indigenous men, who are immune from prosecution by tribal courts.

The Bates Student has previously published articles which feature Indigenous voices and celebrate Native identity, as well as those which call attention to issues of cultural representation and appropriation. The Student strives to continue covering these issues. To raise awareness for this week, and for the harm that is committed against Indigenous womxn, The Student has compiled a list of related articles published recently.
Respecting, Recognizing, and Restoring Indigenous Rights
What does it mean to be a modern, indigenous person today? How am I supposed to dress, act, speak, even breathe like a Native? These thoughts have lingered on my mind for as long as I can remember and were especially highlighted on Monday, Oct. 14. – Skye Brown ‘23

Article Link
Missing & Murdered Indigenous Women, Girls, Trans and Two-Spirit: Our Forgotten Sisters
LaFontaine-Greywind was murdered by William Hoehn and Brooke Crews, her neighbors in the building she lived in. Crews conspired with Hoehn to murder Savanna LaFontaine-Greywind in order to take her baby. Both murderers were sentenced to life in prison; however, Hoehn’s sentence was reduced to 20 years just one year later. This story is one of many tragic experiences in which there are no consequences for the perpetrators. – Ellie Boyle ‘22 & Skye Brown ‘23

Article Link
I Am Tired: Reflections on Identity, Culture and Community
As much as I appreciate the support and praise for writing about my experiences as an Indigenous woman and marginalized member on campus, I am tired of it.  – Skye Brown ‘23

Article Link
Does Bates Deserve a Land Acknowledgement?
While there may be some use in acknowledging that Bates is an institution grounded on Native land, there are also problems that come with using such a statement to unburden and relinquish responsibility for Bates’s role in colonization, settler colonialism and subsequent wrongdoings. – Amanda Metzger ‘22

Article Link
Uncovering a Historic Bates Tradition: The Pipe Orations
Starting in the late-1800s, all the way through at least 1969, Bates’ graduating seniors maintained a tradition called the “Pipe Oration.” Supposedly based on a Native American custom, all members of the graduating class listened to a speech from one of their classmates and smoked a “peace pipe” which, each year, was specially crafted for the occasion. – Kaitlyn Boehm ‘22 and Carly Harris ‘22

Article Link
Why Does This Indigenous Photograph in Commons Not Have a Plaque?
In an effort to find out more about this photograph, I google searched “Bates photograph Indigenous man canoe.” My search revealed that the photograph was part of the 2008 Bates Museum exhibit entitled “Wildness within Wildness without: Exploring Maine’s Thoreau-Wabanaki Trail.” The Bates website provides a summary of the exhibit. This summary and its depiction of Maine’s Indigenous peoples raised even more questions for me. – Joanna Vollrath ‘22

Article link
The Ins and Outs of Indigenous Archaeology
Dr. Kristen Barnett started her work in Togiak back in 2011. Togiak is located in Northern Bristol Bay in Alaska. It is a Yup’ik village accessible only by water or by air, a population of just over 800 people. Because of the remote location, the community still relies mostly on a subsistence economy, which includes salmon, smelt, moose, cod, seal, and more. -Fiona Cohen ‘23

Editor’s Note: The acronym MMIWG2S stands for Missing and Murdered Women, Girls, and 2-Spirit People is more inclusive, and many activists are pushing for its usage over the original MMIWG. The Student chose to use MMIWG because that is what was supported by the Biden administration.