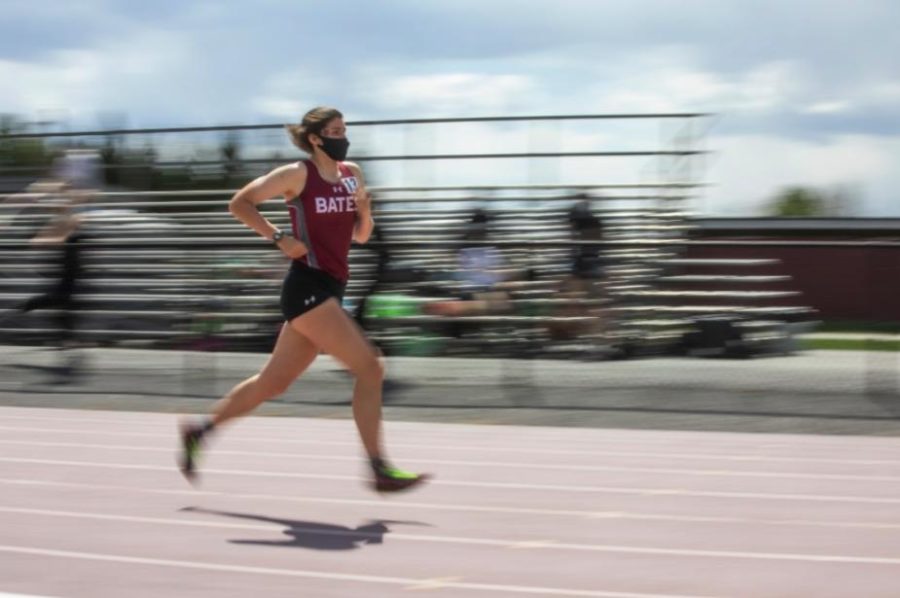 Rowan Hassman ’23 takes a final stride before toeing the line in her 1500m race.

It is hard to remember the last time the women’s track and field team put on their uniforms and hit the outdoor track. Over 13 months ago, on March 12, 2020 to be exact, the NCAA cancelled all winter championships as well as the entire spring 2020 season due to the alarming emergence of COVID-19. The decision sent shock waves through the women’s indoor track team, as six athletes had already made the trip to Winston-Salem, NC, for the Division III Indoor Track and Field Championships before the cancellation was announced.

Robbed of the end of their 2020 winter season and any hopes of competing in the spring of 2020, the Bates women were finally able to spike up on Saturday in compliance with the COVID-19 safety restrictions.

In an email to the student body last month, Bates Athletic Director Jason Fein wrote, “I am pleased to confirm that under a set of rigorous public health protocols, our varsity athletic teams will begin intercollegiate competition this spring.” Fein’s announcement meant that the Bobcats had to run, throw, and jump in masks and compete at two separate sites, with field events taking place at Bowdoin and track events at Bates on Saturday.

Despite the COVID-19 safety restrictions, the Bates women were finally able to experience a sense of normalcy as they resumed competition in a non-scoring meet against Colby and Bowdoin.

“Before the race, I was trying not to put any pressure on myself or have any expectations since it’s been such a weird year and training over lockdown was a bit off and I hadn’t raced in 14 months,” said Coseno.

“I feel like that helped me get out of my head and just run, which was great for the first meet of my collegiate career. I forgot how much I love to race and I felt really good the entire time,” Conseno added.

“Just getting out and racing this weekend felt monumental. I was so ecstatic to get on the starting line with my teammates after all this time, and to be able to watch everyone compete,” remarked Lambert.

“Given the circumstances, I don’t think many people were expecting to race well, but I think a lot of us were pleasantly surprised. We’ve all had to overcome so much to get to this point and Saturday was definitely a celebration of all the hard work we’ve put in to get to this point,” she added.

Genesis Paulino ‘21 had an especially stand-out day, as she defeated three competitors and threw a collegiate personal record in the discus throw (125’9”). Paulino also placed second in the hammer throw (132’6”) and fourth in the shot put (33’6”).

Head Women’s Track and Field Coach Jennifer “Jay” Hartshorn was impressed with Paulino’s performance: “It was great to see Genesis throw a 10 foot PR in the discus and throw so well in the hammer and shot put.”

Hartshorn continued, “We have so few meets and to see a senior make the most out of one of a few opportunities is amazing.”

In addition to Paulino, Ellie Strauss ‘21 was among the few athletes who recorded personal records on Saturday. Strauss won the javelin throw with a throw of 112’6”6, 21 inches farther than her previous best throw. Strauss is currently the seventh best javelin thrower in the history of the women’s track program at Bates.

“It was a joy to watch people compete again,” said Head Women’s Track and Field Coach Jennifer “Jay” Hartshorn who has been eagerly advocating for her runners to be able to compete since the NESCAC presidents gave the go ahead for spring competition.

While Saturday was a non-scoring meet against Colby and Bowdoin, it’s safe to assume that the Bobcats would have had a very good chance of taking home the gold.

The women return to the track on Saturday, May 1, where Bates will host field events, the 5,000 meters and the 3,000 meter steeplechase, while the rest of the track events will be held at Bowdoin.