The Bates Student • May 1, 2021 • https://thebatesstudent.com/21840/news/student-petition-demands-the-immediate-disarming-of-bates-campus-safety/ 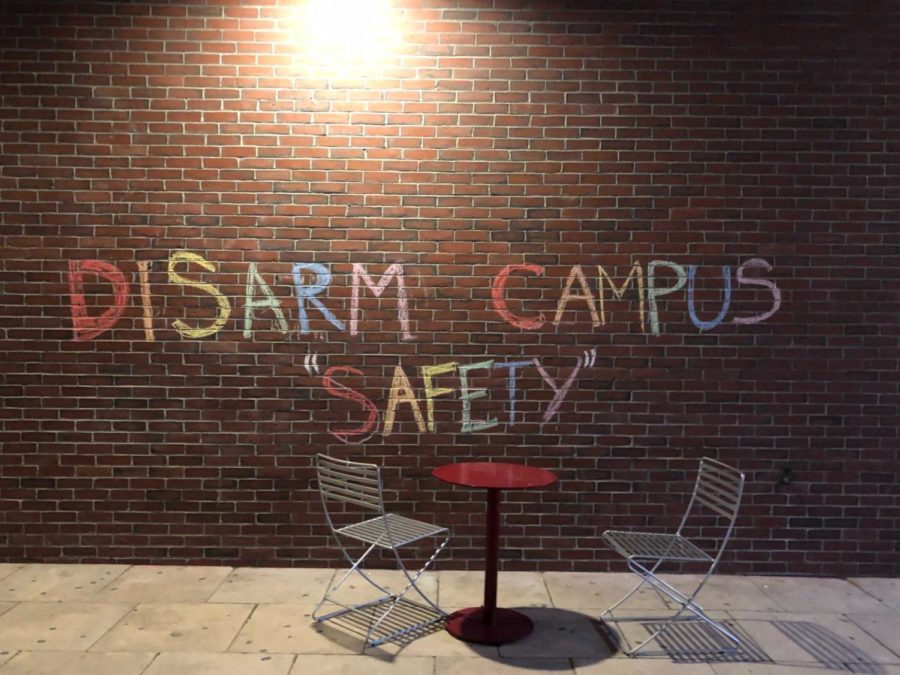 Messages drawn in chalk commanding the disarmament of Campus Safety appeared on buildings across campus this past weekend.

On April 22, a petition calling for the immediate disarming of Bates Campus Safety began circulating among Bates students. The petition received 534 signatures before being placed on President Clayton Spencer’s desk this past Tuesday.

Written by members of the Bates Leftist Coalition (BLC) and the Restorative and Transformative Justice Coalition (RTJC), the petition reads, “In addition to the violent assault on a first-year student on March 5, 2021, the Bates College Office of Campus ‘Safety’ has displayed a comparative and invasive pattern of behavior that is endemic to the structure and position of the office.”

The petition was also a response to the administration’s expressed interest in investing $100,000 to arm Campus Safety personnel with body cameras in an effort to document unethical practices.

Sanika Shah ‘22, one of the founding members of the RTJC, told The Student that they first heard of the potential investment in body cameras from a Bates Black Student Union livestream, and the possibility was then confirmed by Carl Steidel, senior associate dean of students, in an email to the RTJC.

This announcement was contrary to what Steidel had initially told the Mediation and Restorative Justice (MRJ) Fellows, said Ashka Jhaveri ‘22, an MRJ fellow, a member of the RTJC, and a contributor to the petition. MRJ fellows are a group of Bates students who work with Steidel to implement restorative justice practices.

They had been told that administration was “considering defunding and reallocating resources to other departments,” Jhaveri said. “I think they have been, however, more supportive of disarming than defunding because defunding requires information on where the money will go.”

A BLC member and one of the petition writers, Ilana Rosker ‘23, felt that there was a “lackluster” response from the Bates community to the events of March 5, and additionally to similar events in 2017. “The change of semantics from Campus ‘Security’ to Campus ‘Safety’ is, at best, a neoliberal re-branding tactic,” Rosker stated.

The RTJC voiced concern about the potential investment in body cameras at a BLC meeting, which elicited the drafting of the petition. Shah told BLC that the RTJC wanted to add disarming Campus Safety to the demands made in the petition as an immediate action they would like to see take place this semester. A Google document was shared, and the petition was published by BLC the next day.

Jhaveri commented on the ongoing debate as to whether body cameras are effective in reducing unethical behavior in policing. “Body cameras are reactive and not preventative; implementing them is predicated on the assumption that Campus Safety is inevitably, at some point, going to harm Bates students,” she said.

The petition was not without justification for the removal of body cameras. One of the reasons BLC and the RTJC provided is that the Campus Safety officer was aware of being recorded during the March 5 incident, and this knowledge did not prevent or mitigate violence. Additionally, the petition mentions that body cameras do not address the root cause of danger that is inflicted on students by Campus Safety.

The removal of body cameras was not the only demand made by the petition; batons and handcuffs were also requested for removal. “Situations rarely arise in which such weapons could be deemed ‘necessary,’” the petition read.

BLC and RTJC have given the administration until the end of next week to respond to the petition. Both coalitions are currently holding meetings to discuss their plan of action based on potential ways the administration could respond.

A survey was also created by the RTJC to collect data on how Campus Safety affects the people it interacts with, their specific experiences, and what they envision for the future of Campus Safety. Sarah Worley, an external investigator hired by the Bates’ legal team to investigate the events of March 5, shared in one of the open student forums that the investigation would not go anywhere without student input.

The RTJC took on writing the survey themselves so that students could anonymously report to Worley in a way that is accessible, efficient, and less traumatizing. Currently, over 200 people have filled out the form, and according to Shah, there is no way all of those people would have been able to meet with Worley personally to share their experience.

EarlyThursday afternoon, Gwen Lexow, the Title IX officer, sent an email to all students informing them of Worley as a resource for sharing their experiences regarding Campus Safety. “Ms. Worley is interested in talking with any student who wishes to share their thoughts with her and hopes to have a broad cross section of students participate in this process,” Lexow wrote.

This email was an initiative of the MRJ Fellows, who have been repeatedly asking Steidel to release an email to the student body detailing Worley’s contact information.

“While I do not agree that a (white) third party needs to be brought in to validate the experiences and concerns that (BIPOC) students have been voicing for years, this is our best shot at making a change [to] Campus Safety,” Shah told The Student.

After the survey closes on May 7, the results will be formally collated and presented to the Bates Administration and Worley. They will also be published on social media and further action will be taken if deemed necessary.

“The results of the survey will be an opportunity for all Bates students and members [of the community] to understand how Campus Safety is [viewed] on this campus,” Jhaveri said. She also noted that altercations with Campus Safety are reflective of policing in the wider world and the continued trauma inflicted by police on Black and Brown bodies.

When asked about the main goal for the petition and the survey, Shah cited the disarmament of Campus Safety, but there are also demands that require more time to put into place, such as alternatives to Campus Safety and funding into CAPS.

“We want to make it clear that more funding is not the answer and that students are watching and taking action. We are no longer going to tolerate inaction and performative action from the administration,” Shah said.