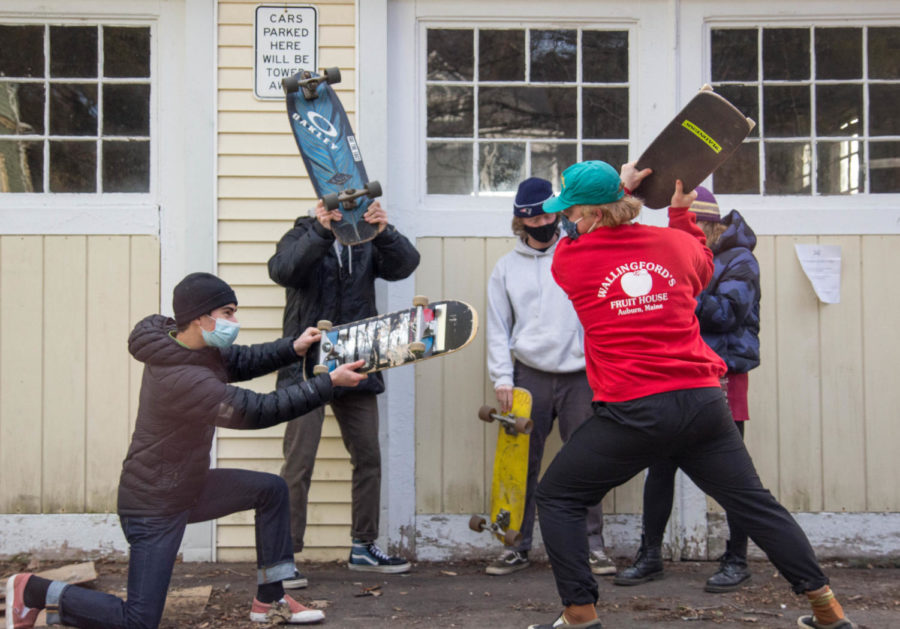 Club members hope they can work with Campus Life to find a satisfactory solution. However, costs for renovating the Barn are high, and there is no suitable space on campus to move the half-pipe to.

It all started with an Instagram post. On March 9, Shred Club leader Tommy Sheils ‘21 took to the club’s social media platform to inform club members and alumni that the Shred Barn, also known as the Moulton House Garage, would be converted into solely a storage space and that the club’s beloved half-pipe would be destroyed.

Within hours, Sheils received an outpouring of support from alumni and students alike, all expressing their frustration and their own fond memories of the garage.

The news was especially shocking to some, considering Campus Life’s recent announcements that the WRBC radio tower, also located on Frye Street, may not be replaced. After Shred Club’s announcement, students discovered that Sailing Club and Cycling Club were also having their student-run Frye Street spaces changed as well.

Campus Life cited zoning and occupancy violations as the main reason for removing the half-pipe from Moulton House Garage.
Upgrades would be ‘Prohibitive’
Shred Club, run by Sheils and Talia Sperduto ‘21, focuses on skateboarding, skiing, snowboarding, and surfing.

“Shred Club is essentially a scrappier, smaller version of the Bates Outing Club (BOC), where we focus on traditionally action sports,” Sheils said. “It’s really, by definition, a low pressure environment just to have fun with.”

One of the most important parts of the club, according to Sheils and junior club leader Max Freund, is the Shred Barn. The Barn, which is owned by Bates, was first controlled by the BOC, but club members voted to give control to the Shred Club instead about seven years ago. The exact date is unknown, as none of the current members of the club were around when the vote occurred, though Sheils estimates it was in 2014.

Sheils, Sperduto, and Freund have all been talking with Assistant Dean of Students for Campus Life Nick Dressler regarding the future of the garage. Shred Club leaders provided The Student with multiple email correspondences between their club and Dressler, dating back to Nov. 5, 2020.

In one email, Dressler wrote, “To staff knowledge, neither Campus Life nor Facilities were consulted about either the transfer of ownership, or about the construction of the half-pipe.”

According to Freund, however, BOC records and posts every meeting’s minutes.

“Someone was just negligent in Campus Life or facilities and didn’t read about it or didn’t see it somehow,” he alleged. “It somehow flew under the radar, for like, eight years.”

The half-pipe was discovered in fall of 2019 when Environmental Health & Safety found it while checking the Barn. In the same March 8 email, Dressler wrote that “concerns noted included that the garage is not zoned or up-to-code for occupancy, nor is it sanctioned for anything other than storage use.”

Bates spokeswoman Mary Pols told The Student that the office of Environmental Health & Safety “makes regular checks of all the campus buildings,” and said the checks are necessary to ensure the structures are safe.

Pols added that the building contained “a number of problems, including combustible materials being stored, an open junction box with wires exposed and the half-pipe itself, which had structural issues.”

Dressler said he met with former Shred Club president Jesse Tallerman ‘20 in the winter of 2020 to inform him that the Shred Barn should be used solely for storage rather than occupancy.

In the email, Dressler also requested to schedule a meeting to “talk through the future of the Barn,” and in a Nov. 5 correspondence, told the club leaders that “Campus Life investigated with our partners in Facilities [on] how to bring it up to standards for occupancy, and found the cost prohibitive. At this juncture, and for the foreseeable future, it should only be used for storage.”
Urgent Need for Canoe Storage?
Dressler met with Sperduto and Sheils in the fall right before winter break to walk through the Barn. Sheils said that in the meeting, Dressler talked to him and Sperduto about the safety concerns Campus Life had about the Shred Barn. After the meeting, Sheils had hope that Campus Life and Facilities could work together to bring the Barn up to zoning code.

In the March 8 email to the leaders, Dressler confirmed that he had “committed to finding out more information about the zoning situation, and what could be done” during their fall meeting.

However, in the same email he continued “at this juncture, there are no plans to make material upgrades to the garage to bring it up to occupancy code.”

Sheils said that communications with Dressler and the rest of Campus Life have been confusing.

“They’ve been kind of like, poking at us trying to figure out what’s going on,” he said. “Offering hope that they would kind of work with us to get the space into a better place. And there was kind of a cascade of emails until like two weeks ago, when we got the bomb dropped.”

Freund added that “all the interactions were about making the Shred Barn a possibility.”

In an email to The Student, Dressler denied telling Shred Club he would work with them on zoning issues.

“In conversations with Shred Club over the course of the last year, Campus Life did not commit to working with Shred Club to change the zoning of the garage at Moulton House,” he said. “Rather, we committed to helping Shred Club leaders understand the situation.”

Why now?” Sheils asked. “Why rip it away from students in this already really hard time? There was an excuse that [Student Life] made that there’s an urgent need for canoe storage, except, if you know, on Frye Street, the canoes have been sitting out for years. They’re canoes; they’re waterproof. We built a canoe rack on the side, as well.”

The canoes belong to BOC, and in a statement to The Student, BOC President Ronan Goulden said “there was no specific request to Campus Life from current Bates Outing Club leadership to have the canoes stored in the Barn.”

Pols stated that the construction of the half-pipe was negatively affecting the quality of the canoes.

“The construction of the half-pipe resulted in the displacement of a number of boats to outside storage, leaving them to age and deteriorate year-round,” she said. “The Moulton Garage is needed for storage. It was never designated as an occupiable space and this will not change.”
Conversations with Campus Life Ongoing
Current Shred Club members have also run into problems with Bates Safety, according to Sheils.

“We’ve been getting hassled for skating on the Coram steps and stuff,” he said. “A lot of different security officers have told me to just go to the Lewiston skatepark.”

“By saying ‘just go to the Lewiston skatepark,’ we feel exiled from campus,” he said. “We have a space on campus for pretty much every activity except [ours].”

Although members of Shred Club may feel displaced on campus, Pols insisted that Campus Safety only becomes involved to ensure the comfort of the campus community.

Sheils believes that getting rid of the Shred Barn will negatively impact the Bates student body as a whole.

“I think Bates is sadly chipping away at its spunkiness and weirdness,” he said.

In an email to The Student on March 28, Sheils wrote that Shred Club leaders were able to meet with Dressler again.

“We want to be clear that while [Dressler’s] communication methods were frustrating, he is not really the bad guy here,” he said. “[Dressler] just follows the rules, and is a messenger and we understand his job is one that comes under fire a lot,” he said.

Pols emphasized that Bates tries to support all student life activities, but when the practices are not safe, it is difficult for the college to support the groups.

“It is college policy to work hard to find ways to make certain student activities safe and appropriate,” she said. “Unfortunately at this time, there is no campus space that can be safely used for the half-pipe.”

There are still meetings going on between Shred Club and the Bates administration, so while the group’s hopes for a half-pipe inside the Moulton House Garage may be fleeting, they may find success in other areas on campus.