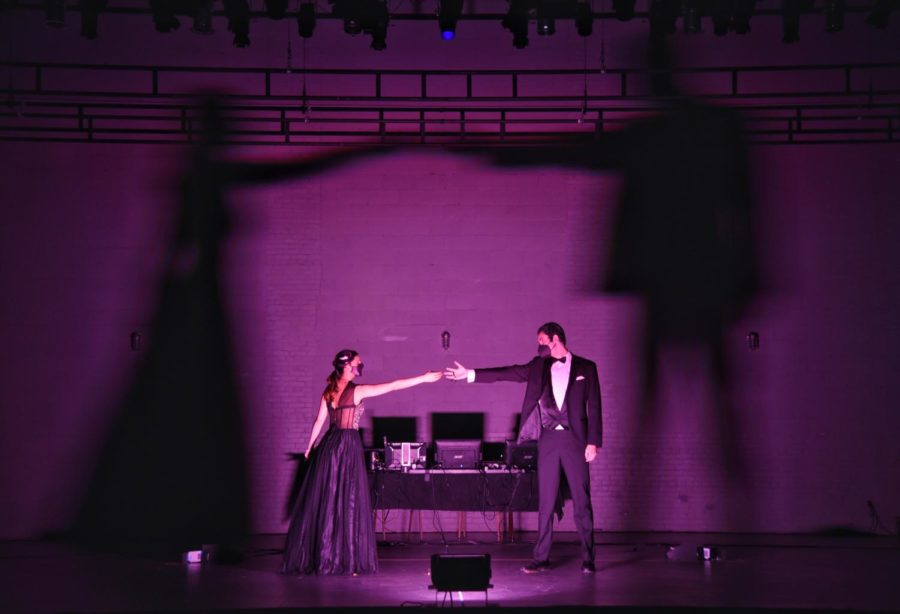 Muskan Verma ‘21 (left) and Max Younger ‘22 (right) starred in “Gaggle of Saints” the first in person theatre event of the year.

Making theater right now is complicated, to say the least. Theaters across the country, guided by major unions like the Actors’ Equity Association and Center for Disease Control and Prevention (CDC) guidelines, have reacted in varied ways. Last semester at Bates, the Robinson Players put together a radio play while the Theater Department played around with Zoom. But on Mar. 25, live theater returned to campus with “A Gaggle of Saints,” directed by Patrick Reilly ‘21.

Reilly is a directing major, and he was recently recognized as a Stage Directors and Choreographers Society Fellow at this year’s Kennedy Center American College Theater Festival. The production was put on as part of his thesis. His independent study, “Hughie,” opened on Mar. 13 2020, running one performance before all students were sent home. The original plan for his thesis was an in-person production of Paula Vogel’s “The Baltimore Waltz,” a farcical comedy set during the AIDS epidemic.

But as fall semester wore on, it became increasingly likely that a fully in-person production, performed in February (and then later March, after the semester pushed back) would be difficult to achieve. His thesis advisor, Senior Lecturer in Theater Katalin Vecsey, helped him choose a new play, Neil LaBute’s “A Gaggle of Saints,” that would be more manageable under COVID-19 guidelines.

“A Gaggle of Saints” is one of three plays that makes up a collection called “bash:latterday plays.” All three plays, in total running about 100 minutes, look at evil through the eyes of modern-day Mormons. LaBute was a member of the Church of Latter-Day Saints at the time of writing. He was disfellowshipped, or denied some privileges, after its premiere, and he has since left the church.

The play is constructed as two interwoven monologues, running about forty-five minutes. The actors performed live from the wings (part of the stage deck that is concealed from the audience) of Schaeffer Theater, and their images were projected onto a large screen that descended from the arch over the stage. They were isolated enough from each other and from stage managers Jem Costello ‘23 and Lauren Reed ‘23 that they could be unmasked, with the screen serving as a barrier between the onstage events and the audience. They also could not hear each other at all, complicating how to achieve a cohesive piece, but it was not noticeable.

If performed as the full unit, “A Gaggle of Saints” comes second in the piece. John (Max Younger ‘22) and Sue (Muskan Verma ‘21, as part of her acting thesis), college juniors who have been dating for four years, recount their trip to New York City for a bash put on by their old youth group at the Plaza Hotel.

The two recount their travel plans, the beginning of their relationship, and then finally the events of the weekend. While Sue and her girlfriends sleep in their Plaza suite, John and his two guy friends venture for a 2 a.m. walk in Central Park. They encounter two gay men parting ways after a tryst. One leaves the park, but the other heads for a public bathroom, and the boys follow.

Alone in the bathroom, John convinces the man — Chet — that he wants to have sex. Instead, he and the other boys attack him to death. John takes the man’s ring as a sort of victory prize, and gives it to the blissfully unaware Sue.

Reilly approached the play almost like a psychological horror film. Younger and Verma begin with upbeat enthusiasm, and it is hard not to like them. The first sign that something is not quite right comes when Sue confesses to liking the blood that got on John’s shirt, after he pricked himself pinning her corsage. It seems like just an odd character quirk, nothing too much to think on, and Verma’s sheer exuberance quickly has you forgetting all about it.

Then John shares that the day he started dating Sue, he beat her ex-boyfriend to a pulp. Younger does a brilliant job of playing it down, like it’s not a big deal and just some messing around between sixteen year old boys. But once you reach the park bathroom sequence, you know just how wrong you were.

John thinks he did the right thing in the bathroom, even though he does not quite know why it was the right thing. Younger radiated power, lit in red with a single white streak across his eyes, and it really felt like you were walking into a horror film. The sequence is occasionally punctuated by completely ignorant comments from Sue, like what time it was and how well she slept. It was eerie and horrifying, and the pure innocence from Verma after the fact felt bone chilling.

In post-show talkbacks, the actors, stage managers and Reilly discussed the rehearsal process and the complexities of bringing these characters to life. Verma is a self-described queer brown woman while Sue was originally written as a straight white Mormon, so she found it difficult at first to enter the character. Younger discussed the importance of not taking his character home, since fully trying to embody a character like John can affect your mental health. Reilly praised the two for taking on tough roles and having a consistent chemistry even when so far apart.

Reilly and Verma are the first set of theater theses occurring this semester: Nicholas Longo ‘21 will direct Heidi Shreck’s “Grand Concourse,” running April 22-26, followed by Deon Custard ‘21 with his production of William Shakespeare’s “Twelfth Night” from May 5-9. Perla Figuero ‘21 and Katie Abramowitz ‘21 will perform their own thesis roles in the two shows, respectively. Both shows are expected to perform live with limited audience capacity, with more information to come.