‘It’s no longer a matter of if, but when’: An Update on the Critical Race Theory Requirement 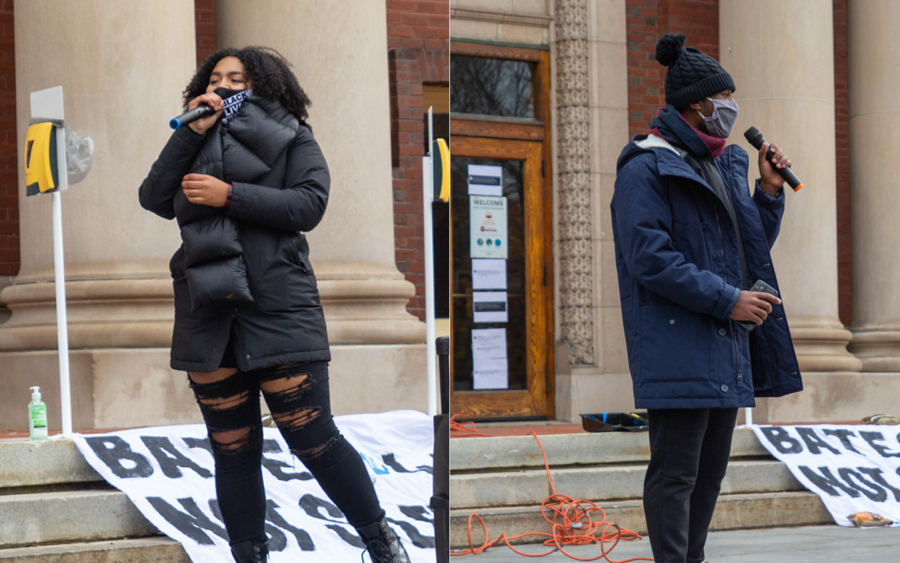 On Oct. 30, 2020, student body co-presidents Perla Figuereo ‘21 (left) and Lebanos Mengistu ‘21 (right) brought forth a demand for a Critical Race Theory (CRT) requirement. Now, plans are underway for implementing it into the curriculum.

During the student-led protest on Oct. 30, 2020, representatives from Bates Student Government (BCSG) put forth a series of demands to the Bates administration, including the insistence that “all Bates students [be required] to take a course in critical race theory.”

What is Critical Race Theory?

Critical Race Theory (CRT) stems from the work of a cohort of Harvard Law educated and affiliated people in the late 1980s and early 1990s. In The Role of Critical Race Theory in Higher Education, scholar Payne Hiraldo summarizes CRT as a theoretical framework that scholars use to analyze “the role of race and racism in perpetuating social disparities between dominant and marginalized racial groups” in American society.

Fairman wrote a senior history thesis titled “Examining ‘White Flight’ and Gentrification in Detroit through Critical Race Theory.” In her thesis, she explained that “critical race theorists, colloquially known as ‘crits,’ argue that American government and legislation have always been based on white people’s property rights ever since white settlers first seized indigenous land and bought and sold black bodies legally.”

After reading the BCSG demands, she put together a Google Doc of relevant resources from her thesis, and shared these with Figuereo and Mengistu.

“CRT provides so many resources and can be applied to so many fields,” Fairman said. “It’s not just an SLQ [Science, Lab, Quantitative Reasoning] requirement; it’s a field of study that is applied within so many other fields of study.”

“Africana understands that [the] phrase is being used as a stand in for an endeavor that is much wider/broader in scope,” Pickens shared regarding the use of the CRT requirement and its implementation at Bates.

According to Diaz Eaton, who attended the student protest this past fall and has worked to support the student-led work for an anti-racist Bates, some faculty have used the language of “Power, Place, and Privilege” (PPP) in place of CRT.

“This would allow the opportunity to include decolonizing frameworks and others that aren’t necessarily derived from CRT, but still help us understand how racism and settler colonialism operate on a structural level,” she said.

While the specific language may still be evolving, Mengistu shared that the CRT requirement seeks to encompass “race, power, and privilege” more broadly.

“We want this to be a big step for the school to commit to anti-oppressive structures,” Figuereo added.

According to Mengistu, the Bates curriculum purports to educate the mind and the body. Yet he pointed out that with the current system, students can graduate without ever finding themselves in spaces where discussions about race, power, and privilege occur.

“It’s important to have difficult conversations that can be transferred to the wider world,” he said. He believes that this requirement is a place to start.

Mengistu wants to see Bates become a leader in this field and initiative by setting an example for other institutions to follow, “not just because of our history but because of where we see and envision students and graduates going in the future, as socially-minded students.”

Contrary to other institutions with similar requirements, Mengistu hopes that Bates will be unique in that the requirement can be achieved within students’ majors, making it directly relevant to their field of study.

“Students in every field need to be prepared for the world they will enter. Understanding the world through white supremacist views has never been useful for anyone,” Pickens said. “It not only systematically disenfranchises people of color, but it also forces white folks to understand themselves only through the degradation of another.”

She added “if there were required courses in each major that deal with white supremacy and the itinerant -isms that accompany it, then students would be better prepared to encounter the world.”

While a CRT requirement alone will not change the systemic issue of racism, Diaz Eaton believes that having a sense of the common goals and language would certainly help, “both in terms of campus conversations, but also in terms of sending Bates students out into the world prepared to have these conversations.”

Fairman agreed with this sentiment, adding: “Students don’t always know how to talk about race, power, gender, and other parts of social identity and how they interact,” she said. She hopes the CRT requirement helps students have these conversations while doing so in a way that doesn’t alienate people or perpetuate microaggressions.

A lot of work has been going on behind the scenes since the requirement was first proposed last October, and the process remains lengthy and challenging.

“Curricular changes are quite hard to implement from an administrative point of view,” Mengistu said. However, he said that this is one of the fastest responses he’s seen from the Bates administration during his time as a student.

Additional challenges to overcome include pushback from some faculty members and the following question: “If everyone is now participating in the teaching of this requirement, how do we develop the expertise and cultural competency required for non-experts to teach these courses without devaluing the expertise of our expert colleagues (who are often faculty of color)?” as Diaz Eaton put it.

In order to address this, Mengistu shared that all faculty will need to undergo training, which he also described as a form of “professional development.”

“Faculty are being actively encouraged to learn about and teach the parts of their field that have been willfully ignored because of white supremacy including whose contributions matter, how these fields come to be, and what knowledges/ideas they rely upon to do their work,” Pickens shared. “The work is difficult and it is arduous; I know that because I’ve been doing it for years. It is time for others to begin doing it as well.”

Pickens said she isn’t sure what other challenges lie ahead. “I don’t know,” she said. “That’s the thing about white supremacy: it finds increasingly clever places to hide.”

Figuereo and Mengistu also selected three additional students to join the committee, all of whom will still be at Bates next fall:  Zoe Gallate ‘22, Maya Karmaker ‘24, and Aaliyah Moore ‘24.

“As a committee, we wanted a one-to-one representation to show that student voices are equally important,” Mengistu said. Everyone chosen to be on the committee wants to implement the requirement. However, according to Mengistu, people who are against implementing the requirement will also have an opportunity to voice their opinion.

According to Pickens, one way to measure the impact of the CRT requirement at Bates is through looking at the number of classes offered or through qualitative data surveys.

“However, those will only tell part of the story,” she shared. “College is a formative experience for students, which means that it will still be working on you 10, 15, 20, 25 years from now. The experiences you have here, the knowledge you learn –– that determines how you interact with the world around you. So, the impact of something like this [requirement] reverberates and maybe isn’t felt keenly until a student is in their 30s.”

In terms of faculty impact, Pickens shared that “it gives them a better understanding of their fields. Knowing more and being able to teach these concepts better, being able to help multiple kinds of students see themselves and their possible contributions, doing the work such that others understand and can enact equity –– that too has a reverberating and long-term effect.”

Pickens added that for staff, the requirement may reduce the feeling of being “overburdened from dealing with the trauma white supremacy causes: temper tantrums about grades, entitlement to staff time, blatant disrespect, racial fatigue from micro-aggressions, depression and anxiety related to being in a white supremacist world (which affects everyone), et cetera. I do not think this is a panacea but it is a way to mitigate harm for all parties.”

Adding to this, Eaton shared: “At the core the meaningful metric is how safe, supported, and successful our BIPOC community members feel here at Bates. And of course the curricular requirement is a small piece of moving that needle.”

Mengistu said that the committee hopes to share an official proposal by the end of May that can then be sent out to faculty in fall of 2021.

When asked about the role that the administration has played thus far, Fairman said that there’s been a lack of transparency. While verbal support is there, she said “there hasn’t really been a check in on progress.”

Eaton, though not officially part of the working group, is still working with the Department of Digital and Computational Studies (DCS) to develop a proposal to the faculty for a minor, with the intention to add a CRT/PPP requirement as soon as a list of courses is identified. “It is our effort to signal support for the student proposal. Even if I’m not directly involved with the college-wide effort, I hope to work with others to manifest this into DCS,” she shared.

She went on to add: “If we can work together to make this happen, both logistically and from a resource allocation aspect, that is a signal about what Bates values moving forward. Presumably after implementation, the Bates community will have a common experience and language that they can draw on as we make move towards racial justice as a campus together.”

Mengistu stressed that throughout the process, the work has been very collaborative. “From the planning of the protest and the creation of the demands list, to a rough draft of what BCSG envisions the CRT requirement looking like, to the formation of a working committee, there have been so many students involved in one way or another. That’s what’s going to make this [initiative] successful,” he said.

Figuereo also pointed out that since both she and Mengistu will be graduating in May, she is relying on student committee members to follow through with the work that is coming up.