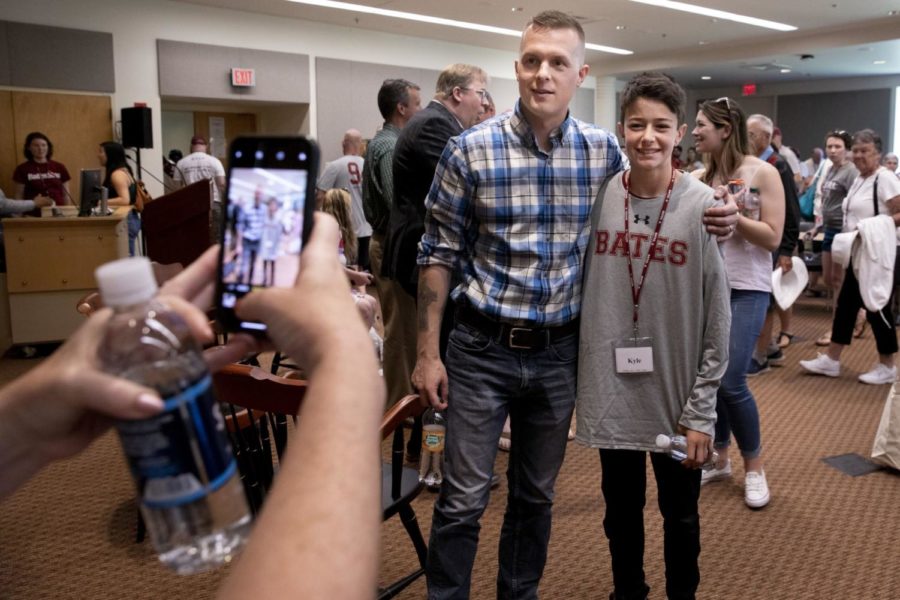 Jared Golden ‘11 and fellow U.S. Representative Ben Cline ‘94 spoke at Reunion in 2019. Here, Golden is taking a photo with the son of a Bates alum in Pettengill Hall.

When the House of Representatives voted to pass President Joe Biden’s $1.9 trillion coronavirus relief bill, there was only one House Democrat who voted against it, twice. That was Democratic representative and Bates alum Jared Golden ‘11 of Maine’s 2nd district.

Biden’s relief bill is one of the biggest and most progressive stimulus plans in U.S. history. It will provide immediate and direct financial relief to families and workers who have been affected by the pandemic. While the majority of the Democrat-controlled House voted in support of the bill, every House Republican voted against it, arguing that the spending is excessive.

Golden said that he believes that some parts of the bill addresses certain needs but most of it is untimely and unnecessary spending.

“Borrowing and spending hundreds of billions more in excess of meeting the most urgent needs poses a risk to both our economic recovery and the priorities I would like to work with the Biden Administration to achieve, like rebuilding our nation’s infrastructure and fixing our broken and unaffordable healthcare system,” Golden said in a statement on March 10.

In an email interview with The Student, Golden said that as he researched the bill and listened to constituents, much of what he learned did not match up with what he was being told by party leaders.

For example, Golden said that he was told that K-12 public schools were in desperate need of additional relief due to the pandemic and the funding in this bill would help schools return to in-person learning faster. However, in reality, he said, as of last month, about 92% of school relief funds that he voted for in 2020 were still unspent, and only about eight percent of the $118 billion in the new funding contained in the latest bill will be spent by the end of the current school year.

Additionally, he said, the legislation sent relief checks to households that make up to $150,000 a year. In doing so, Democrats are trying to redefine what it means to be middle class. But in his district, the median household income is $48,000, and $150,000 is considered to be affluent.

“I see a national Democratic party that is increasingly catering to wealthier coastal, urban, and suburban communities,” Golden said. “After we’ve already spent $4 trillion to confront the pandemic, I’m highly skeptical of trillions more in funding that is poorly targeted, in some instances — like school funding and rental assistance — poorly timed given the availability of previously allocated funding, or in many cases, benefitting wealthier families that are not feeling the economic pain that so many Americans are facing.”

Golden discussed a few issues that he looks forward to working on with President Biden.

“President Biden and I are both strong believers in unions and the power of working people when they organize and stand together,” Golden said. “I’m convinced improving union participation is one of the best ways we can fight income inequality in this country.”

However, he said that Congress can do much more to protect workers’ organizing efforts and make it easier for workers to unionize in new workplaces. Golden voted for the Protecting the Right to Organize Act earlier this month and led a group of over 100 Democrats to demand that the bill be brought to the floor for a prompt vote. He hopes to work with the president to get this bill signed into law.

He also noted that he and President Biden share similar views on healthcare. Golden believes that the president should focus his efforts right now on lowering the eligible age of Medicare.

“President Biden has suggested lowering the age to 60,” Golden said. “I’ve cosponsored legislation to lower the age to 50. I think we can find some middle ground there and get something done that will have huge benefits for millions of Americans and hundreds of thousands of Mainers.”

President Biden has said that he wants to build a new rural economy and revitalize main streets in rural areas. Boosting the economy in rural Maine has been one of Golden’s priorities since he was elected to Congress in 2018.

Golden will introduce a bill this year to rebuild the Office of Rural Affairs at the Small Business Administration (SBA). The office oversees the SBA’s business and economic development programs in rural America, but he said it has been lightly funded and staffed for decades. Golden wants to partner with the Biden administration to revitalize the Office of Rural Affairs and reorient federal small business programs toward rural communities.

While Golden agrees with several of Biden’s goals, he also says that he plans to work together with the president when he believes his policies work for Mainers, and that he will stand up to Biden when they do not.

“I attract the ire of some in my party because I’m one of the few in Congress who won’t fall in line when I believe my party isn’t doing what’s right,” Golden said. “I do my homework, talk to my constituents, and then call it like I see it, whether or not it’s the party position.”

As a macroeconomist, Shea is used to thinking about how events and policy impact the economic outlook. “Good economics,” identifies the tradeoffs involved with this type of policy, Shea said; “bad economics,” on the other hand, pretends that they do not exist.

“The $1.9 trillion will constrain policy in the future,” Shea said. “Students should think about whether $1 trillion could have been better used on something else they care about, whether that be spending on something like student loan forgiveness or a capital gains tax cut. I hope our students recognize these tradeoffs, think through them, and then decide whether the bill was worth it.”

Shea’s hope is not to recruit students to any specific policy vision or ideology; it is to teach students to use evidence to weigh costs and benefits for themselves.

Golden also discussed his views on the healthcare system and why he defines it as broken.

“The system prioritizes profits over keeping people healthy, allows Americans to go into bankruptcy just for getting sick, creates conditions that shut down hospitals in rural communities where they’re most needed, and makes life-saving drugs unattainable to many,” Golden said. “Add to that the fact that the system is purposefully complex and opaque.”

Pharmaceutical companies, hospitals, insurers, and middlemen all fight to keep the prices they charge hidden from consumers. Golden noted that last week, even as hospitals have been required to start disclosing certain prices this year, many have taken steps to hide this information from online search results. Patients have had to fend for themselves as amateur participants in a system designed and operated by profit-maximizing professionals.

“The root of the problem is that the folks with the money control the system,” Golden said. “The prescription drug lobby is one of the largest in Washington, and they throw their dollars around so that broadly bipartisan proposals to tackle prescription drug costs go nowhere. The health insurance lobby is also incredibly powerful, and they spend tens of millions every year to make sure that their bottom lines are protected from any changes Congress makes.”

From Golden’s standpoint, the best place to start with healthcare reform is fighting the corrupt influence of money in politics.

“If Congress can get its act together and exercise some discipline, there are meaningful, long-lasting steps we can take right now to make the system work better for Mainers,” Golden said. “In a Congress with razor-thin margins, we should focus on realistic, consensus proposals that have the president’s support, like lowering the Medicare age.”

That one change, he said, could instantly provide access to affordable care for over 20 million Americans, including tens of thousands of Mainers. It could also help rural hospitals stay afloat, if it is combined with targeted increases to Medicare reimbursement rates, he said.

Golden also discussed how Bates has shaped his current values in politics and in relation to this bill.

“In my experience, one of the most important elements of my Bates education is how it helped me learn to back up and take a look at the broader, established systems and institutions at work in our society and view them from a place of skepticism,” Golden said. “I generally approach the conventional wisdom of Congress, media coverage of our national politics, and the political rhetoric employed by the political establishment with extreme caution.”