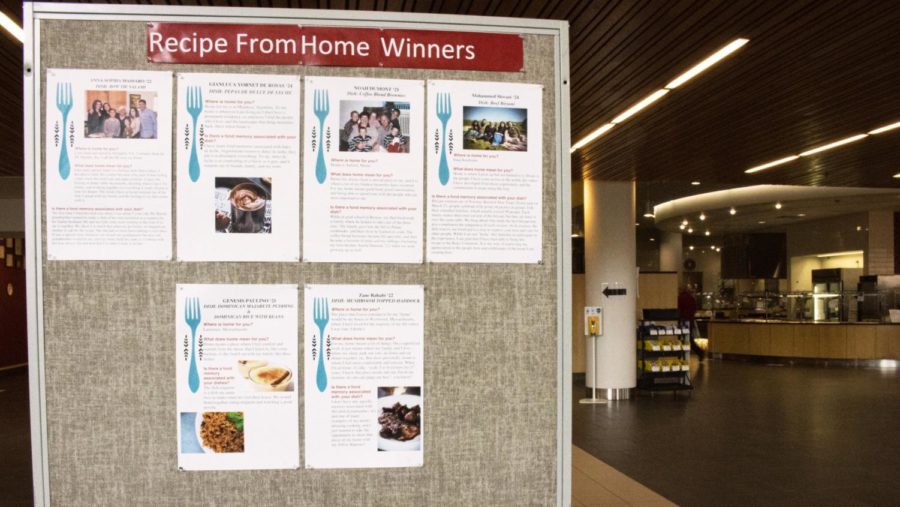 In addition to featuring student dishes in Commons, CHEWS invited the winners to share their understanding of “home” and the significance of their recipes.

Dominican Majarete Pudding, Ben’s Pumpkin Bread, and Pepas de Dulce de Leche were some of the recipes that students had the opportunity to sample in Commons on Wednesday, March 24. These recipes, in addition to five other student recipes, were amongst the recipes submitted to Dining during the “Recipes from Home” contest and were selected as the eight winning dishes.

Director of Dining Cheryl Lacey shared that the goals of the contest were to serve “dishes that were meaningful and indicative of students’ cultures” as well as “create a sense of community that was missing in this COVID-19 environment.”

Submissions were due by Feb. 22. While Dining, Catering and Campus Events (DCCE) wasn’t sure whether students would be interested in the contest, Lacey shared that this year’s contest received more submissions than ever before; 25 dishes were submitted by students as well as parents of students.

“I do think people are missing that sense of home and ability to connect with other students across campus over food,” Lacey added.

In past years, many students would often take advantage of the stovetops and ovens in dorm kitchens to cook and share food with friends. However, due to the COVID-19 safety guidelines, Bates decided to turn off these appliances, which are found in most, but not all, dorms.

Dining reached out to Genesis Paulino, ‘21 who works with the Office of Equity and Inclusion, to reach out to affinity groups across campus in an effort to diversify the recipes being submitted. “Genesis was very helpful in making those connections,” Lacey shared.

Criteria for the contest included recipes that were “relatively easy to make with accessible ingredients,” Lacey said. The dishes also couldn’t be too delicate, since they needed to hold up on the steam table.

Dining also wanted to strike a balance between vegetarian and meat recipes, entrees and desserts. While the majority of recipes that were submitted were for savory dishes, Dining still managed to select several tasty dessert recipes to feature.

Winners were selected based on how well the dish could be scaled up to feed the student body as well as the extent to which the recipe would need to be modified to allow for such high volume. Commons chefs and the bakers communicated with the students in an effort to replicate their dish as well as possible.

CHEWS invited the winners to share their understanding of “home” and the significance of their recipes, and featured these responses through a series of Instagram posts.

In addition to helping with outreach, Paulino also submitted two recipes. Coming from Lawrence, Mass., she describes home as “a place where I feel comfort and warmth from the music that I listen to, like some bachata, to the food I eat with my family…”

Majarate is a dish that Paulino’s aunt loves to make when visiting. “We would bond together eating majarete and watching a good novela,” Paulino shared.

Zane Rahabi, ‘22 grew up in Westwood, Mass. and submitted a dish that reminds him of his mom’s amazing cooking.

Home means a lot of things to Rahabi, including where he feels most comfortable and relaxed. “When I’m at home, it’s like, ‘yeah, I’ve lived here for 17 years, I know this place inside and out, I’m in my element, no one can judge me here,’ you know?”

For Noah Dumont ‘21, home is just across the Androscoggin in Auburn. “For me, home means good food, good conversation, and being able to spend time with the people who are most important to me,” Dumont wrote. The coffee blond brownies are his Dad’s specialty, and became a favorite of Noah and his siblings when they were growing up.

For Gianluca Yornet de Rosas ‘24, home is in Mendoza, Argentina, but home is also broader than that. “To me, home is wherever I am living at; I don’t have a permanent residency, so wherever I find the people who I love, and the landscapes that bring memories back, that’s where home is,” he shared.

“I have many fond memories associated with dulce de leche. Argentinians looooove dulce de leche, they put it in absolutely everything. To me, dulce de leche is as comforting of a flavour as it gets, and it reminds me of friends, family, and my roots,” he added.

Anna-Sophia Massaro ‘22 was born and raised in Arlington, Va., five minutes from the D.C. border, and calls the D.C. area home. But home for her is not just a place, it is also a feeling.

“I enjoy the feeling of dinner table discussions, deciding what to have for dinner, and working together so everything is all ready just in time for dinner. The foods I have at home remind me of the time I spend with my family and the feeling of joy that comes with it,” she shared.

Massaro first tried bow tie salami when she was about five years; at the time, she was visiting her British grandmother, who wanted to surprise her Italian husband with a dish of her own invention. Massaro said she and her younger sister liked the dish so much that when they returned home, they begged their mother to ask for the recipe. Her family has been making the dish ever since.

“It was a special treat whenever we visited our grandparents because our grandmother would let me and my sisters help her make it. Cooking with her was always fun, and now that I’m older, I make it for her!” Massaro added.

Mohammed Shwani, ‘24 of Iraqi Kurdistan submitted a recipe for beef biryani, which reminds him of Nowruz (Kurdish New Year).

“Every year on March 21, people celebrate [this holiday] by going on picnics in groups with their extended families… Each family makes their own version of the biryani, but they all share it over the same table.” He added that “at its essence, the dish renews our bond and is a way to express your love and care for other people,” a sentiment he aimed to share with the people here at Bates.

The Recipes from Home contest allowed students to share their own understanding of home with their peers through foods and dishes that are meaningful to them. As Shwani put it, “home is the people I have come across in the world, the values I have developed from those experiences, and the communities I created along the way.”