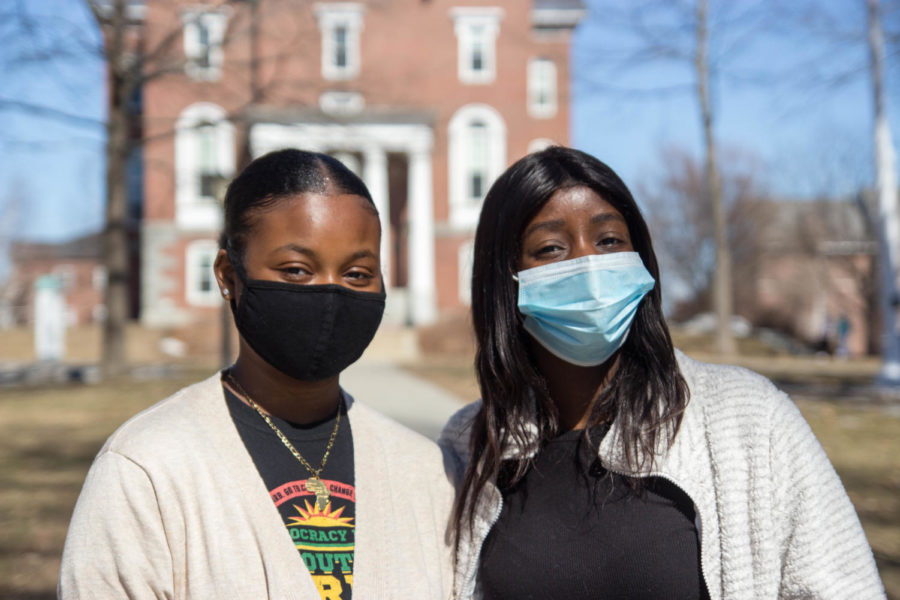 “For many first years, this year has made it especially difficult to meet friends due to the COVID-19 restrictions. Given that Bates is a predominantly white institution (PWI) these vital connections and networking opportunities are already less available for students who identify as Black, Indigenous, and people of color (BIPOC).”

First-years Aaliyah Moore, Aisatou Barry, and Faith Nwando started the school year as three strangers who all lived in Page Hall; now they are the coordinators behind the theme house Empowering Young Minds (EYM), a house that aims to be a space for womxn and non-binary students of color on campus.

Community is important for this house, which is why they use the term “womxn.” The theme house description explains that their invitation extends “to all applicants who identify as womxn of color and non-binary students of color.”

Theme houses are proposed by students who have an idea “for a compelling living-learning environment,” according to the Bates Residence Life page. Before a house can be approved, student coordinators need residential fellows –– either faculty or staff who can help lend expertise to the specific topic of the house and guide the work of the students involved.

The coordinators hope that EYM will allow underclass students to connect with older students. Moore stated that her loneliness was “a repeating cycle,” and that this house is a way to make sure this cycle has the chance to be broken. Even though first-years traditionally cannot reside in theme houses, their aim is that the first-year students will be welcomed there and be given a mentor to help them through their first year.

For many first-years, this year has been especially difficult to meet friends due to the COVID-19 restrictions; however, given that Bates is a predominantly white institution (PWI), these vital connections and networking opportunities are already less available for students who identify as Black, Indigenous, and people of color (BIPOC).

Nwando, Moore, and Barry all agreed that, during their first months at Bates, it was difficult to connect with students they could identify with.

Moore recalled that her first months of school were riddled by the constant feeling of loneliness. “I didn’t have any friends before I met these two girls,” she said.

After starting to spend time together halfway through the fall semester, Nwando shared that they realized they were “almost the only Black girls in Page.”  These women wanted to ensure that next year’s incoming class had a more positive social experience, hence the idea of a theme house proposal.

Barry added that by creating this house they could be who they were and not worry about being judged by their classmates. However, getting this project off the ground has proved to be a challenge, causing these young leaders to feel discouraged.

They became invested in this project during winter break. As first-years with limited prior knowledge of theme houses, they decided to reach out to the Office of Intercultural Education (OIE) in hopes they could find someone to be their residential fellow. This seemed promising, until their sponsor left Bates and was replaced.

Theme house applications opened on Mar. 5 and proposals are due Friday. With only a few weeks between applications opening and the submission deadline, it helps to plan ahead, but these first-year said they didn’t know where to start.

Moore, Barry, and Nwando all agreed that their biggest challenge was getting in contact with the right people. When they emailed Bates Residence Life, they said that at some points they either did not receive an answer, and at others they received vague, unhelpful information.

The women said they felt lost and optionless. They did not feel like they were being supported. “We [wanted] our voices to be heard,” Moore explained. Moore even felt that maybe they should take a step back and that applying for JA positions would be a better way for them to achieve their goals.

Instead of backing down, the women chose to push through the roadblocks. They found an older application for theme houses, so they were able to get a general sense of what was needed. The main requirement was dedicated interest. So, they sent out a Google Form to gauge interest and reached out to affinity groups by themselves.

It was still difficult to get clubs to advertise their idea; however, the coordinato

rs stated if there was more networking and support for first years with older students, which EYM intends to do, that might have solved this issue.

It wasn’t until Moore met a helpful older student that the coordinators were finally able to meet with Residence Life staff, who they say have been very helpful so far.

Still, Nwando believes that EYM is necessary, because without students creating spaces for themselve, they might never be created.

“I feel it is a student responsibility in a [PWI] institution like this…people in high authority don’t [understand what] the students want unless the students are actually vocalizing it,” Nwando added.

Echoing Nwando, Moore stated: “We need better resources…we need consistent staffing,” referring to the numerous staff changes that have occurred in the OIE this year and in past years.

Barry agreed, “We need more student support when it comes to our needs, we did not know anyone as first years.”

EYM’s  goals include connection and networking, which is why their primary idea in terms of a program relating to their house is mentorship. They plan to assign each member of the EYM house a first-year mentee. The mentee will be a student who also identifies as a womxn of color.

Throughout the year, the coordinators plan to host activities such as a mental health progress evaluation for members of the house, group trips such as getting dinner off campus, writing letters of appreciation to each other, and writing letters of appreciation to professors in order to grow their network. The coordinators expressed that the purpose of this is to help build confidence and demonstrate support for everyone around them.

They want the members of EYM and every young womxn to leave Bates knowing that they created a family and are ready to go out into the world and “dominate many jobs that are usually dominated by men or women who are not POC,” Moore said.

By empowering young minds through this house, they hope to “build confidence, self-esteem, and to become respectable womxn at Bates.”

April 9 is when the coordinators need to turn in finalized rosters. The goal is to have 18 people apply to be in this theme house, but the coordinators assured that non-residents will be welcome to come to their events. Moreover, they hope that the house continues to provide space for BIPOC womxn in future years, because it is vital for all students on campus to feel like they have a place that they belong.