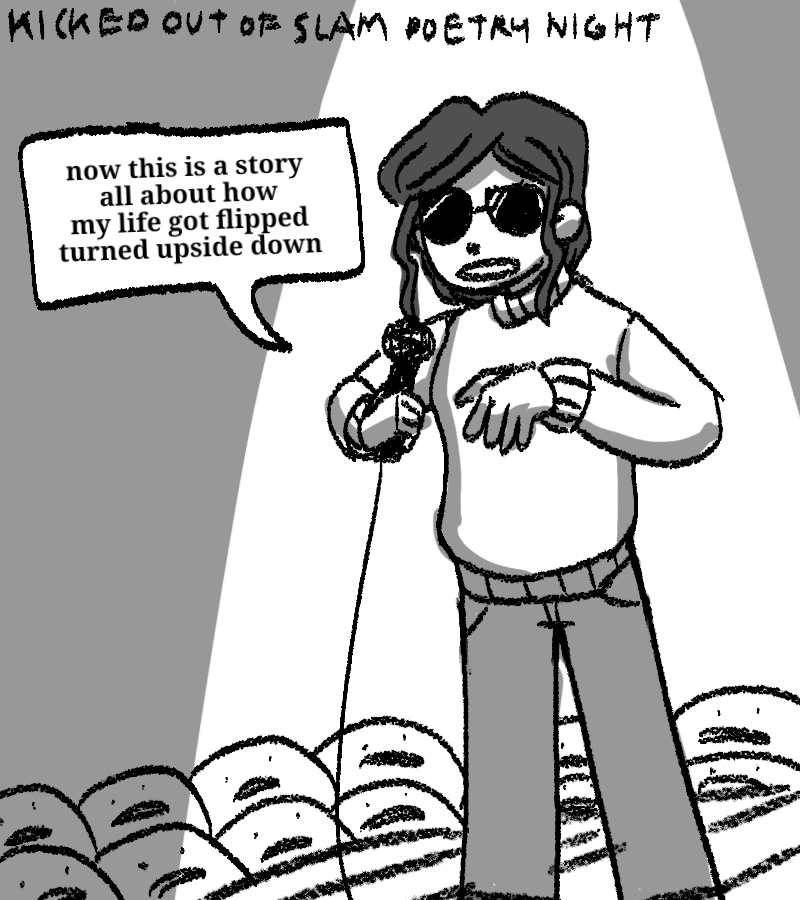 Have you ever wanted to combine politics with art? Do you have a burning desire to perform those poems sitting in your notebook, or even just meet some talented people? The new spoken word poetry club, Bates Spitz, might be for you.

Bates College has offered event s for spoken word poetry before, even inviting Kit Yan in 2014. Yet, there is no evidence on Bates’ website of the college ever having had a spoken word poetry club. When co-President Khadeeja Qureshi ‘23 first arrived at Bates, she was surprised that there was not already one established at Bates, since there are many other clubs focused on creative and performing arts.

Spoken word was not new to Qureshi though. “I have had some experience with slam poetry. I’ve done tournaments and open mics. I’ve always used it as an outlet,” she said.

Slam poetry is the competitive form of spoken word poetry. Qureshi found that Kamarebe Boswell ‘23, who would become her co-president, also had prior experience with slam poetry. “In high school I was part of a poetry club, and junior/senior year I emceed a coffee house open mic,” stated Boswell.

Frances Hart ‘23, the club’s secretary, had a somewhat different experience with poetry before joining Bates Spitz. “I’d always independently written poetry and was involved in theatre, but I didn’t have an outlet for both of them. Performing something is a way I can be myself and this is a way to do that. College plays such a big role in growing up, and I like having a space where I can experience empathy, lament, or joy. A space where there can be reflection,” she said.

This space of reflection, a space where creativity can flow, is what gives spoken word its unique atmosphere. It allows the time to focus on social and political issues and have conversations on them. It is also a place to celebrate accomplishments.

The atmosphere and community that spoken word fosters is what attracted Qureshi and Boswell to create Bates Spitz. Boswell said that they wanted to focus on social justice and social activism work, with Qureshi adding that, although spoken word may be fun to do alone, “it’s different to have a community to do it with.”

“I’ve always just admired having this vibrant community on campus that brings people together,” Qureshi said. She added that she wants this club “to provide a space for BIPOC, gender minorities, and people who live with disabilities” where people can be free to express themselves and share their stories.

The club aims to bring the Bates community together in any way possible. They want everyone to feel like they are involved, whether it is being in the club or merely people watching a performance, which they hope to put on in future months..

“It sounds super simplistic, but it’s really ingrained in being present, being a part of that atmosphere and environment,” Boswell added.

Though there might not have been a spoken word club on campus before, it surprised Qureshi how many people either do spoken word or were interested in trying it.

After listening to or watching a spoken word or slam poet, such as Amanda Gorman or Sarah Kay, it becomes clear that performing poetry is similar to any other performing art. It is exciting to watch, and it can create an intimate connection to the performer.

Yet, the performing poet is different in that they are the director, actor, choreographer, writer, producer, and dancer combined. The way the poet uses pauses, inflections, and tonal shifts makes the poem feel alive. The poet can even physically move as they act out the poem. There is a huge amount of preparation that goes into doing a performance like this, not to mention the time it takes to perform as a group.

Bates Spitz has already performed in two Bates sponsored events: the club showcase and the Bates Winter Arts Festival. “The performance was difficult because it was online, but we established the rhythm and the beats, [and the] parts that would be solo,” Qureshi said.

Coordination is something that the group wants to work on. Though the writing and performing pieces can be difficult and time consuming, Hart reveles in it. “I just liked the collaboration part of it when we were practicing for the poem. It was fun to go through it in a group,” she said.

Performances are something that the club looks forward to continuing, but there is another aspect of spoken word poetry that may not be too obvious: competition. That is where the slam poetry comes into play.

A college may have a spoken word club, but that does not mean that this is also a slam team. Qureshi wants people to know that there is a chance to compete on the collegiate level with the College Unions Poetry Slam Invitational (CUPSI). In order for Bates to send a team to CUPSI, poetry slams must be done at Bates beforehand, which the club looks forward to hosting.

Competing is not necessary to join the club, nor is joining the club necessary to compete. The goal for the club according to Qureshi is “to nail down how spoken word truly is different from classical poetry…It has strong roots in hip hop and rap. People who think they may not be great writers may be the best slam poets. Because it’s a spoken art; it’s just different. I think people will be surprised that anyone can learn slam poetry.”

If you are interested in being a part of the spoken word club or slam poetry team, contact [email protected].