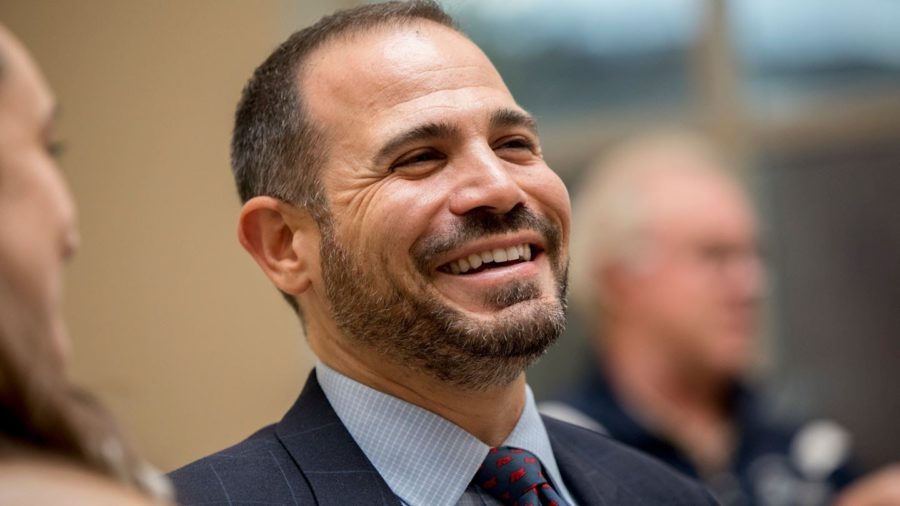 Athletic Director Jason Fein has helped the Athletic Department to pivot and be adaptable in a wild and unpredictable year.

Bates Athletic Director Jason Fein has been named Athletic Director of the Year (ADOY) by the National Association of Collegiate Directors of Athletics. This is Fein’s second time winning the award, having won it previously at Drew University back in 2016.

While athletics have only resumed this past weekend, Fein and the Athletics Department have been instrumental in Bates’ success this year. Along with converting Underhill Arena into a testing center, Fein and his department have implemented plans which have allowed athletic practices to continue in a year where some schools all but cancelled athletics altogether.

Ilana Zeilinger ‘23 sat down with Fein to ask him about the award.

JF: It’s been a really different year. I think whereas we’re used to being evaluated on the success of our teams on the courts and the fields and what we’re doing with facilities and fundraising, this year it was more about what adjustments we were able to make. It started out early last spring when we started talking about how we were going to bring the students back.

We talked about how we were going to use our facilities to help the entire college deal with Covid. Turning Underhill Arena into the testing center was a huge undertaking, and it’s something that’s worked out really well. Turning Gray Cage into a dining facility was another big undertaking. The adjustments of everyday life that we were used to as ADs, coaches, and administrators were totally flipped just as it was for students, and I think how we adapted was great across the country.

A lot of my colleagues did very similar work, but here at Bates we have a really great team. Our coaches were able to stay working and we were able to keep folks whole. I compare what we did with the Underhill Arena to any facility improvement that we would have done for athletics. It wasn’t that different than setting up for an NCAA event. We kind of put an athletic spin on everything this year, and I think that helped.

IZ: The 2020-21 academic year has fallen victim to the global pandemic which has been challenging for athletic departments everywhere. How has the Bates Department of Athletics worked to help Bates operate successfully and be there to assist our coaches and student-athletes?

JF: Specially for coaches and athletes, a big part of their everyday life was eroded because competition wasn’t happening. We worked to partner with Headspace and went to a lot more virtual platforms. Mindfulness, meditation, virtual workouts, nutritional counseling, emotional support — we tried to really check in around the wellbeing of our students and make sure that folks had the opportunity to access services that they might need. I think that turning everything into a virtual space was tough, but it gave us some opportunities to expand what we were able to do.

You can reach a lot more people at the same time and offer more programming than if we were in person. We were also able to focus on some department projects that we had time for since we weren’t competing. We didn’t have to work to fit everything in based on practice and game schedules, so we were able to do more work with racial justice, social equity, and diversity and inclusion. I think that’s definitely been another area of improvement for our coaches and student-athletes.

IZ: You are someone who is highly involved in national NCAA affairs. Can you speak about the roles you play within the NCAA?

JF: This year I’m the chair of the Division III Management Council [which is] the overarching committee responsible for looking at all that goes on within Division III. It’s made up of college presidents, athletic directors, faculty athletic reps, and student-athletes from the National Student-Athlete Advisory Committee. It’s 22 people across the country.

This year we’ve done all of our meetings virtually, and I was lucky enough to be elected the chair for this year, which is a crazy year to be the chair. The chair of each council serves on the NCAA board of government which is the overarching group that governs NCAA affairs. Prior to that, I had already been involved in the committee structure. I’ve served since its inception on the diversity, equity, and inclusion working group which has been really satisfying for me. We’ve looked at diverse hiring practices, we created a diverse hiring guide for institutions so that they can be more inclusive in their hiring of coaches and athletic administrators.

We’ve been lucky enough to bring Jess Duff on board as our Assistant AD for Student-Athlete Services. She’s really helped head up a lot of our social justice initiatives, and we’ve created a student and staff of color action group. We also have a group called the Bates Athletics Agents of Change, and we’ve looked at our own hiring practices as well. We had eleven openings for assistant coaches throughout Covid, and we want to make sure that we’re doing the best outreach that we can to try to bring in the most diverse pool.

IZ: The NESCAC presidents recently gave the go-ahead for spring competition. Can you speak about your vision for the future of Bates Athletics as we navigate the end of the COVID-19 pandemic?

JF: First of all, I’m really excited that we get to see folks competing in just a few days! Specifically for spring sports, this would have been the second season that would have been lost if we weren’t able to pull this off, so I’m really happy. The NESCAC presidents were really great at collaborating with the ADs and our sports medicine teams to make sure that we were doing it in the right way. But the future is going to look a little bit different. I don’t think we’re just going to flip a switch and come out of this in the fall where everything is back to normal. We’re still probably going to have some remnants [of COVID] and we don’t know what that’s going to be.

Getting back to practice is a great first step. Everyone has embraced the public health policies and practices, but we still don’t know what’s happening with the variants and how long immunity lasts, so I’m sure we will still have guidelines in place that might be reduced to masking, distancing, the number of fans, or less densely populated buses. This spring we’ll be competing and traveling but only for day trips. We won’t be stopping on the road, and we’ll have half the capacity on the buses than we usually would. We’ll have to see how that all develops as we go forward. We’re going to utilize our time as best we can, because student-athletes get four precious seasons to compete and then it’s into the real world, so we have to cherish all the opportunities we have and make the most of them.

IZ: What, or who, has been most inspirational to you this past year?

JF: I’ll put it like this: I would not want to be in a battle with anyone more than athletes and coaches, because they’re competitors. They want to win. They want to problem solve. When it came to problem-solving this year, athletics was tapped to solve a lot of our problems. I saw none of the day-to-day complaining that we tend to fall into in today’s society. Just like it was a sporting event that we were running, the problem-solving happened. That problem-solving and competitive athletic spirit was what impressed me the most.

If I had to narrow it down, I think that the team we have in athletics is very special. Our team — Nick, Celine, Jess, Paige, Scott — was great at acknowledging where we fell short and figuring out how we can improve it next time going forward. It made me feel really good about the work that we do, even when there’s not a crisis. Honestly, I could probably count on my fingers the number of complaints that we’ve had. Everyone’s been great about it and has rallied.