“Save the Tower”: WRBC Aims to Maintain FM Broadcasting Capabilities 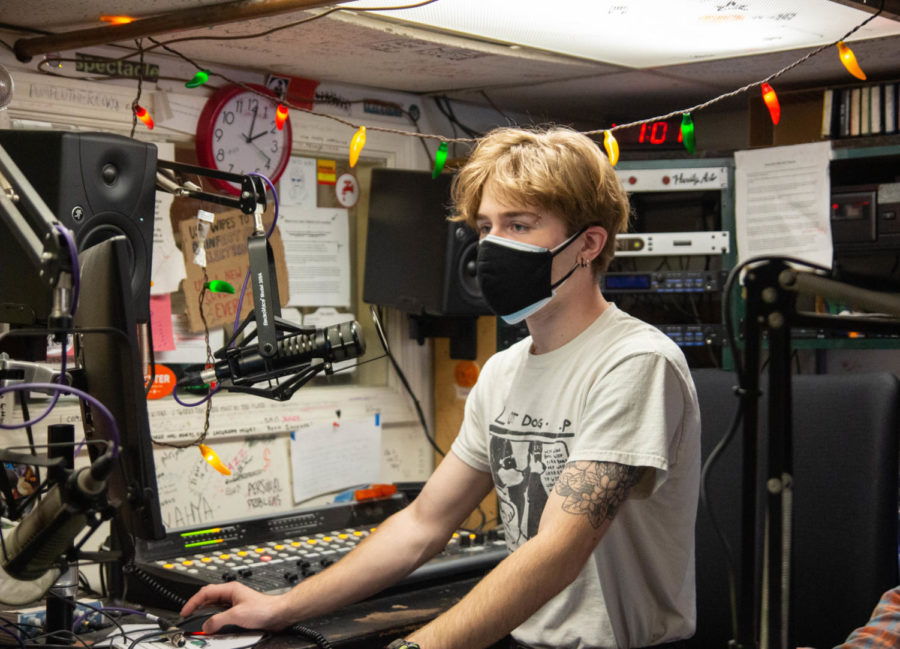 Bates College’s sole radio station, WRBC, is one of Bates’ longest and most beloved student institutions. The station first appeared on the radio waves in 1958 and has served as the social nucleus for music lovers at the college since then.

Currently, the radio station’s future is in question. The station’s radio tower is corroded past the point of usefulness, and WRBC is advocating through talks with Campus Life and Bates Financial services that the cost of replacing the tower — which has been estimated to cost upwards of $100,000 — should be covered by the college, as opposed to getting rid of the tower altogether and switching to only streaming.

WRBC broadcasts directly from Frye Street and employs a number of student DJs to curate and play music that students as well as the local Lewiston-Auburn community can listen to. Prior to COVID-19, the station held trivia nights and concerts, which featured various musicians and bands.

On March 10, the station published the following statement on its official Instagram page: “The college has recently expressed an unwillingness to renew our FM broadcasting capabilities, and switch WRBC to an online-only streaming station. The tower is old and corroded, and the college has deemed this technology to be too ‘out of date’ to replace.”

In order for WRBC to broadcast its programming on FM radio, they require the use of a radio tower located behind the studio to access the air waves. As of now, the tower has reached a level of physical decline that prevents it from functioning properly.

Students from WRBC were disappointed by the prospect of losing the tower, which would limit the station’s broadcasting potential to purely digital. As such, they distributed a Google Form to students and local community members which encouraged respondents to explain their connection to the station, as well as justify why the tower should or should not be maintained. WRBC also issued a referendum for Bates students and student DJs to voice their opinion on keeping or getting rid of the tower.

While the structural issues with the tower had been discussed between WRBC and Bates Facility Services last year, the pandemic and subsequent dismissal of students from campus halted those talks. Having revisited the topic this semester, much of the WRBC board is in agreement about wanting to restore and maintain the tower, countered by opinions from the college that resources would be better allocated elsewhere.

Campus Life stated in an email communication that “this is not a conversation about whether the college has the resources to maintain the tower, but rather whether those resources might be better spent to support WRBC in other ways… To say the tower is in imminent danger, or that a decision has been made to not fund a new one, is not true, though a decision as to whether or not it should be replaced is a timely one given that the current tower has reached the end of its useful life.”

For Schmidt, FM broadcasting ability is a key element of closing the gap between the Bates and Lewiston communities, as much of the station’s audience consists of members of the surrounding Lewiston-Auburn area. “We view FM as such an important bridge to the community. The vast majority of callers I get on my show, most people are listening to the FM, and they’re Lewiston community members.”

Broadcasting via FM rather than exclusively via stream, argued Schmidt, also offers  unique professional opportunities for students hoping to pursue careers in broadcasting or music. “Running a ‘real’ radio station provided a lot of professional development opportunities for people trying to go into broadcasting… It’s a real radio station, and you get the experience of being able to chart your music and record labels send us new CD’s and music. And as an internet station, we just don’t have that kind of presence.”

According to Nick Dressler, Assistant Dean of Students for Campus Life, the ongoing discussion about the tower’s future has been a collaborative process. “Campus Life continues to meet with WRBC,” stated Dressler, “ and met with their executive board two weeks ago to discuss a plan forward, including making a case for why Bates should or should not invest in the radio tower, and also to share information on other ways we can support the WRBC student experience.”

Currently, the station appears to have reached a consensus on going forward with replacement.  “WRBC has since united on proposing that Bates replace the radio tower.  We have coordinated a meeting between WRBC, Campus Life, and Geoff Swift, the college’s VP for Finance and Administration, this week to engage in further discussion.”

Schmidt understands why the college may not be financially motivated to pay for the tower’s replacement, as streaming has revolutionized the way people listen to music and issued a major blow to the radio broadcasting industry. “I definitely understand that argument. I mean, radio is not as popular as it used to be,” he said.

But, maintenance of the tower has implications for how WRBC functions as an organization. Without FM broadcasting, the station would technically lose legal proprietary rights to the name “WRBC.” While the club could still continue to use those letters at Bates, they would lose their 91.5 designation on the FM dial, and would no longer have legal claim to their letters or call numbers. As such, Schmidt believes that WRBC’s ability to broadcast on FM “determines whether or not WRBC is going to be a radio station or a college club.”

A number of financial estimates for replacing the tower have been floated around, according to Schmidt. “The idea is that over the lifecycle of a new tower, the estimate has been a hundred thousand dollars. Which is, yes, a lot of money… That’s a lot of money for a club. And that’s why we’re trying to emphasize the fact that we’re also a community radio station, not just a club.” Much of the support for replacing the tower, Schmidt claims, has come from local community members.

“We get the sense, as I think a lot of people are,” remarked Schmidt, “that the college is looking to cut back on spending. And we think that the arts is a really horrible place to [do] that.”

“Our lens in this matter,” reiterated Dressler, “is about what is important for the student experience and how we can best support WRBC moving forward. Campus Life’s goal is to continue to work with WRBC on this matter.”

In closing, Schmidt stated that WRBC’s on-air programming is “unparalleled in the area. The fact that you can turn on WRBC and get anything from hyper pop to post-hardcore… from a programming perspective, I think it would just be a huge loss for the area. Without 91.5, the airwaves become just a little quieter.”