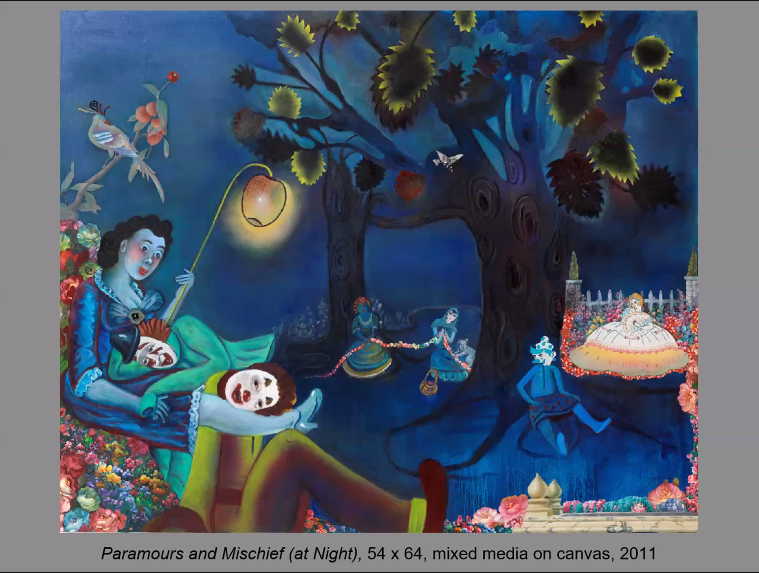 Bramson’s pieces have a feel she describes as “sunshine noir,” with images of revelry contrasted with something darker beneath the surface.

On March 10, the Bates Museum of Art hosted Chicago-based artist Phyllis Bramson in a virtual retrospective of her work and influences, entitled “Love and Affection in a Hostile World.” In the hour-long talk, Bramson shared anecdotes from her artistic career, sources of inspiration, studio habits, and advice as she scrolled through a PowerPoint featuring scans of her pieces. She makes what she refers to as “found paintings,” or improvised pieces using whatever she has on hand.

She opened with a brief glimpse into some of her influences, which include Henry Darger, Seymour Rosofsky, Philip Guston, and Jean Honore Fragonard. Many of her pieces draw on Eastern imagery and facets of nineteenth century orientalism, such as drawing upon the styles and images of Chinese pleasure gardens and Persian miniature paintings. She frequently mashes them up with images pulled from Western fairy tales, though she did express her particular fondness for the Arabic folk tales collected in “One Thousand and One Nights.”

Bramson’s first true stint in the art world was designing the window displays for the Chicago-based Marshall Field’s department stores, which are now owned and operated by Macy’s. This experience inspired her love for mixed media, often combining paint, print-outs, fabric, and other textures in her works. Each piece often has multiple layers on it, and she described how if she walks into her studio and sees something has fallen from a canvas, then it wasn’t meant to be.

All of her work is very loose in that regard. She does not create with a message in mind. In terms of her process, she described herself as “a blank slate; it’s so bizarre.” While she does not consciously incorporate current events into her work, she does listen to public radio in her studio and finds that it “creeps in.”

When introducing the talk, she shared “my work is mostly about love and affection with some ironic aspects to it,” adding later that some pieces have an almost “sunshine noir” aspect to them. Her figures may look cheery, or engaged in revelry, but something darker lurks underneath their surfaces.

Visually, Bramson’s work relies on bright color palettes. The figures are rarely standing or sitting straight: they are more often contorted in some way, undertaking some activity, or supported by other figures in the scene. There is usually more than one central image to engage with, thanks to her layering. While she cites Persian miniatures as an influence, her own work is anything but occupying frames at least 36” x 36”, or three feet tall and three feet wide.

As the presentation came to a close, Bramson offered some insight into her teaching career as well as advice for any artists in the virtual room. She found that teaching allowed her to try out new techniques and absorb the energy of other creatives. She freely admitted that it can be difficult to break into the art world, and she herself did not hit her stride until her late thirties.

But, she cautioned against waiting for your big break to create, saying, “you can be ready [for your break] and the art world is somewhere else, and you may have missed the boat, but hopefully the boat will come back… Always act like you’re preparing for a show, because if the opportunity comes up and you’re not ready, you won’t get it back. If you’re in it for the long haul, something, eventually, will catch up to you.”

After her talk, Bramson answered some questions and reflected on the difference between her personal life and her art, explaining “there’s a big difference between what one is walking out the door and what one does as an artist.” Art provides the opportunity to explore thoughts, emotions, and ideas that may get buried in day-to-day life. Her improvisational approach means she focuses on what is best for the work without letting her head interrupt her creative process.