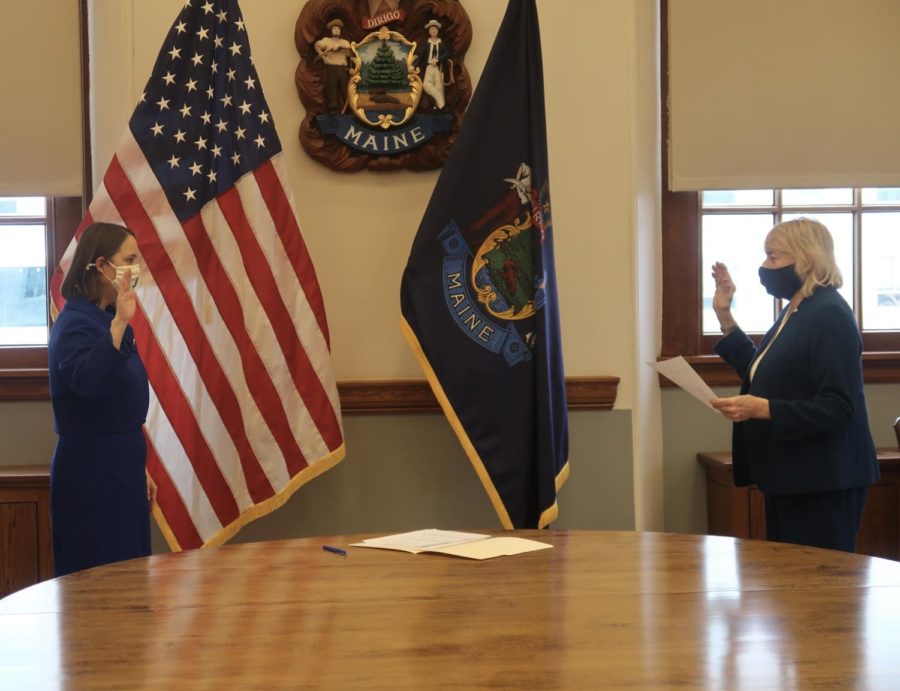 Bellows, left, is Maine’s first female Secretary of State, and was sworn into her first two-year term in this position on Jan. 4 2021. She most recently served as state senator in state senate district 14 and as an executive director of the Holocaust and Human Rights Center of Maine in Augusta.”

Zoom backgrounds in the COVID-19 era can provide small but sometimes surprising insights into a stranger’s life. For example, when Maine’s 50th Secretary of State Shenna Bellows logged onto Zoom from her office, she had the complete text of the Maine Constitution on the wall behind her.

“I never dreamed when I was a kid that I would necessarily be Secretary of State someday,” Bellows said in a Zoom conversation with Bates students on March 9. “Although I did order a copy of the Bill of Rights and the Preamble to the Constitution out of some sort of magazine, and I had those on my bedroom wall when I was growing up.”

BatesVotes and the Harward Center hosted Bellows for a Q&A discussion about voter suppression in Maine. Students were interested in hearing her priorities for her new role. Seven Bates students joined, as well as Peggy Rotundo, director of the Harward Center, and Emily Cook, Bellows’s special assistant.

Bellows is Maine’s first female Secretary of State, and was sworn into her first two-year term in this position on Jan. 4. She most recently served as a state senator representing state senate district 14 and as an executive director of the Holocaust and Human Rights Center of Maine in Augusta.

Bellows began by discussing her educational background and public service record. She was once an international politics & economics major at Middlebury College. Since then, she has had a string of impressive positions: AmeriCorps VISTA volunteer in Nashville, Peace Corps volunteer in Panama, and executive director at the American Civil Liberties Union (ACLU) of Maine. Her story is one of persistence and self-discovery — the life of someone with a passion for learning.

The first Q&A question of the evening: was the 2020 presidential vote challenged in Maine?

“There was a lawsuit challenging the [2020 presidential] outcome in Maine, and the court threw it out,” Bellows said. “It was challenging Kamala Harris and her citizenship, and it was completely bogus. It wasn’t actually from the Trump campaign. It was from an individual.”

In states all across the country — including Maine — there has been tension about voting rights in the 2020 election. Recently, the GOP pushed to enact hundreds of election restrictions nationally, and Republican lawmakers across the country have proposed at least 250 laws to limit mail voting, early in-person voting and Election Day voting.

Bellows said that she and her predecessor,  Secretary of State Matt Dunlap, did their best to demystify the voting process.

“We have to report on how many people voted, and we have to look and make sure that the data entry into the central voter registration matches the totals that we reported,” Bellows said. “There are all of these little checks and balances to make sure that people aren’t voting twice… that no one is stuffing ballots into a machine. Each ballot has to match someone.”

As Secretary, one of her goals is to provide official communications that may reassure people and act as an antidote to misinformation and disinformation in elections that are designed to suppress the vote. Another goal she has is to continue thinking about representation, inclusion, and equity, and figuring out how to make a meaningful difference in these areas.

The biggest real state-wide challenge for Maine, she said, is a feeling of “comfort with the way things have always been.”

In general, Bellows wants voting to be easier, so that Lewiston residents have other options besides going to Lewiston City Hall to vote. For example, she said college students should be able to vote from their dorms. Breaking through these societal norms, she said, is something that Maine is working on as a state.

Bellows has appointed the first Latina Deputy Secretary of State, Joann Bautista, and the first female state archivist, Katherine McBrien. Yet Bellows pointed out that the state of Maine still has a ways to go in terms of diversifying political leaders.

Along with discussing her thoughts about voter suppression and her work in the government, Bellows shared her advice about finding a purposeful job.

“I think that the best advice that I have received from different people at different points of time is to go for it,” Bellows said. “Don’t say no to yourself. Let other people say no to you.”

Bellows said she started thinking about running for Secretary of State about a year ago. Some of her friends advised her not to risk her safe state senate seat, and she decided not to run. But then a close friend called her and questioned why there were no female candidates in the race.

Inspired by her conversation with her friend, Bellows ran a three-week race for the position and won. Her only regret is that she ever doubted herself.

This was not the first time in Bellows’ career that she ran against the odds. In 2002, Bellows sent out more than 100 applications and only heard back from three employers. She ended up working for the ACLU from 2005 to 2013, which she believes was an important part of her life story.

One year later, as the Democratic nominee for the U.S. Senate in the 2014 election, she took on longstanding Republican Senator Susan Collins and was defeated, but she values the lessons she learned.