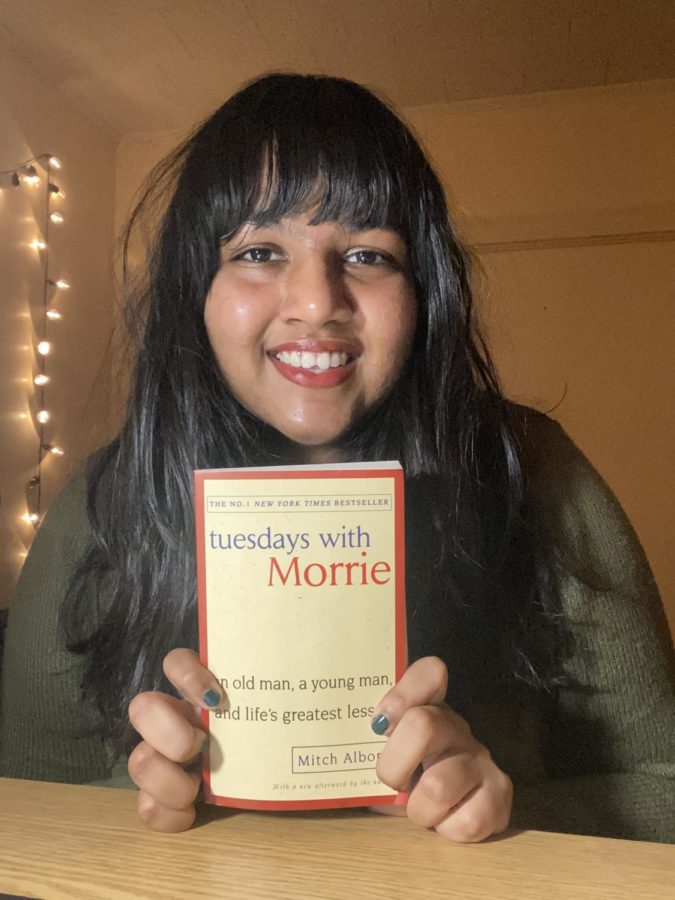 “I read the book and I felt that it just had all the stuff of life,” Choudhary said. “When I read it, I felt less lonely. I felt hopeful.”

It is an ordinary Tuesday at Bates College. Students are sprinting to class and many are drinking their third cup of coffee after a restless night of sleep. Others are speed walking to Ladd to print their mid-term papers just in time for class.

Perhaps this anecdote is humorous, maybe even relatable. But it also reveals a concerning problem that exists in our modern society.

We live in a fast-paced world that operates on speed and efficiency. Technological advancements like iPhones, Androids, laptops, and social media have made our society more accelerated than ever before. Only recently are we beginning to ask the important question: at what cost?

I met up with Khushi Choudhary ’23 to talk more about this. Choudhary is the spiritual coordinator of the Multifaith Chaplaincy and the head of the book club at Bates. She is from India, where she was forced to stay for nearly a full year due to the COVID-19 pandemic. The experience was very difficult for her: “I had been home for so long, and I wasn’t coming back in the fall,” she shared. “I was really depressed and sad.”

At a low point in her life, Choudhary picked up the book “Tuesdays with Morrie.” The non-fiction book is written by Mitch Albon, a former student of Morrie Schwartz, a sociology professor at Brandeis University. Every Tuesday, the two would eat lunch and chat. Mitch and Morrie formed a very close bond at Brandeis, but lost touch after Mitch graduated. When Mitch found out that Morrie was dying, he reached out, and they were able to rekindle their bond in the final month of Morrie’s life.

The book gave Choudhary a glimmer of hope. “I read the book and I felt that it just had all the stuff of life,” she said. “When I read it, I felt less lonely. I felt hopeful.” She liked the book so much that she decided to choose it for the book club’s group read.

Mitch Albon, the book’s author, represents the “modern man.” After graduating from Brandeis, Mitch had dreams of becoming a pianist. He eventually gave up on the dream and pursued a career as a sports journalist. Mitch made a lot of money, traveled the world, and bought a nice house. Still, he was not satisfied.

Mitch shares commonalities with many others. He did not follow the path he wanted, but instead the one that he was told to follow. People saw Mitch’s dream of becoming a pianist as frivolous, and eventually, he listened. “I traded my dreams for paychecks, and I didn’t even realize I was doing it,” Mitch Albon shared in his book.

“Mitch is a little bit of a warning sign,” said Choudhary. “I would call it a wakeup call, because Mitch is just following the course laid out for him.”

Morrie represents something entirely different: he was not afraid to go against the grain of society. He danced and sang without a care in the word. He loved, cried, and never took anything in life for granted. When he was diagnosed with a terminal illness, Morrie had no regrets. “He continued to do the things that made life meaningful for him, even though he knew that his time was limited,” explained Choudhary.

Morrie is the representation of the authentic man, she said.

“We have to consciously decide whether we want to fall into the trap, or whether we truly want to be authentic to ourselves,” said Choudhary.

Choudhary recalled one of her own life experiences where she battled her inner “Mitch vs Morrie.” She wanted to drop her major in psychology and replace it with a religious studies major instead. She was advised against it. “That might not work, it’s too risky,” she recalled people telling her.

She was not satisfied with the advice she was receiving until she decided to visit her favorite professor, Cynthia Baker of the Religious Studies Department. Baker changed Choudhary’s perspective by asking a simple question: “How can you even think of staying if you’re so unhappy?” This conversation was a turning point for Choudhary, and she later changed her major to religious studies.

Choudhary is confident in her decision to follow her own path but admits that the future scares her. “I’m terrified of graduating into a world where the Mitches are more ubiquitous and the Morries are few and far between,” she shared. “This book was written 25 years ago, but it’s so relevant today because the situation hasn’t changed. If anything, it’s gotten worse.”

She believes that empathy is the gateway to progress in society. “Empathy is something that we just generally lack as a society and need to practice more of,” said Choudhary. “We need to be able to care more, and not just because we ourselves are suffering.”

She criticized society’s bias of IQ over EQ (Emotional Intelligence): “There’s not a focus on creating community space, or being able to really communicate with people, or understand each other.”

Next Tuesday, students will still sprint to class, turn in papers with minutes to spare, and drink lots of coffee. Perhaps as they scramble to get to class with two minutes to spare, they can take a second to appreciate the beautiful sound of the ringing campus bell.