Fostering Connectivity in an Unconnected World

The M.O.V.E. Program Brings Bates and Lewiston Student Athletes Together 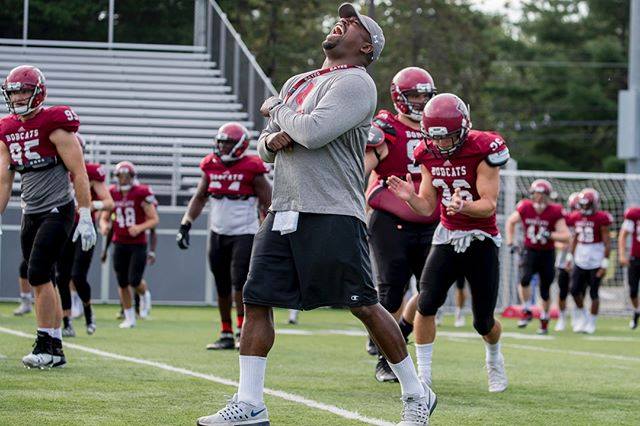 MOVE has become even more important to Coach Hall as the pandemic affects connectivity between students.

Malik Hall, head football coach at Bates, and Lauren Nudi ’23, a Harward Center community outreach fellow, have been working together to connect Bates student-athletes with the local Lewiston community.

Hall, who had been toying with the idea to create the M.O.V.E. program since the summer, explained that his main goal was connectivity. The way the world is structured due to the pandemic, it is harder to foster meaningful connections; this program is a way to create relationships which create a stronger sense of community for both Bates students and Lewiston youth.

“The pandemic created a change in the social norm, and connectivity wasn’t provided,” Hall said, “It created a big void in my life, as an adult, but as a college student and middle school kid, friendship is everything.” Hall figured out a way to find a safe and productive way to fill this social void for students.

Hall began with the concept of M.O.V.E., which stands for mood management, overcome, visualize, and empower. Hall wanted to be sure this program would give athletes from different backgrounds and ages a safe space to mentor and connect with each other.

Nudi began working with Hall in January: “I saw his idea and initial PowerPoint, and I was hooked.” She too agreed that “connectivity is needed during this time, especially among students.”

As soon as Nudi and Hall began recruiting athletes from Bates for this program, there was solid interest. A registration form was sent out to Bates student-athletes and came back with 65 initial interested volunteers. After the program’s training ended, they retained 55 student athletes who are currently volunteering with the program.

When asked about how they found Bates student-athletes to participate, Hall said he was never worried. He already had traction because of his personal connections through Bates athletics, with coaches reaching out to other coaches, and Nudi helped with the Harward Center’s connections.

Hall was, and continues to be, impressed by “the level and capacity of the Bates students because this work is not subject to age.” He continued by mentioning Nudi’s hard work, adding, “Lauren was able to give it wheels so this program can move forward — no pun intended.”

Their first week of the program began March 3, pushed back from the initial Feb. 15 start date due to school vacation schedules within the Lewiston school district. The first week went well, with 25 boys showing up and participating in the emotions-focused session. The girls’ session will begin on Wednesday. The programs run virtually once a week, with two sections split by gender per request of the Lewiston schools to aid in the younger students’ comfort and ease.

“The core of the program is this curriculum of M.O.V.E, so each session addresses one of the acronyms,” Nudi explained.

The program is eight weeks long, meeting every other week focusing on one word of the M.O.V.E program through worksheets, personal anecdotes from the trained Bates students, and open questions that allow for conversations and small breakout group discussions.

In terms of how the 45-minute sessions are filled, Hall says, “our students will let us know where they want to go. It focuses on the commonalities that we all share.” Each group leads personalized conversations that allow Lewiston students to feel heard and share with each other.

Hall was also glad to see Bates giving back to the Lewiston community. “Bates may have a lot more resources and structure to give those experiences, like this mentorship program, to our student body,” he said. He then continued by adding that if it wasn’t for the students who had ambition and foresight about what they wanted to do with those resources, programs like these would not be able to happen.

Hall also recognizes the importance of students having a vision on what they want to do after Bates, pursuing their passions in ways that also make a difference in the world. This is what he observed in Nudi, who’s drive allowed for the program to take off quickly and successfully.

As both Nudi and Hall share, this is just the beginning of the M.O.V.E. program. They plan to start a second round and get more volunteers involved. “It is an evolving process,” Nudi stated.

Later on, they are hoping to set up sports centric one-on-one meetings between Bates students and Lewiston students. With momentum on their side, Coach Hall and Nudi are well on their way to expanding the program and increasing their positive impact on the Lewiston community.