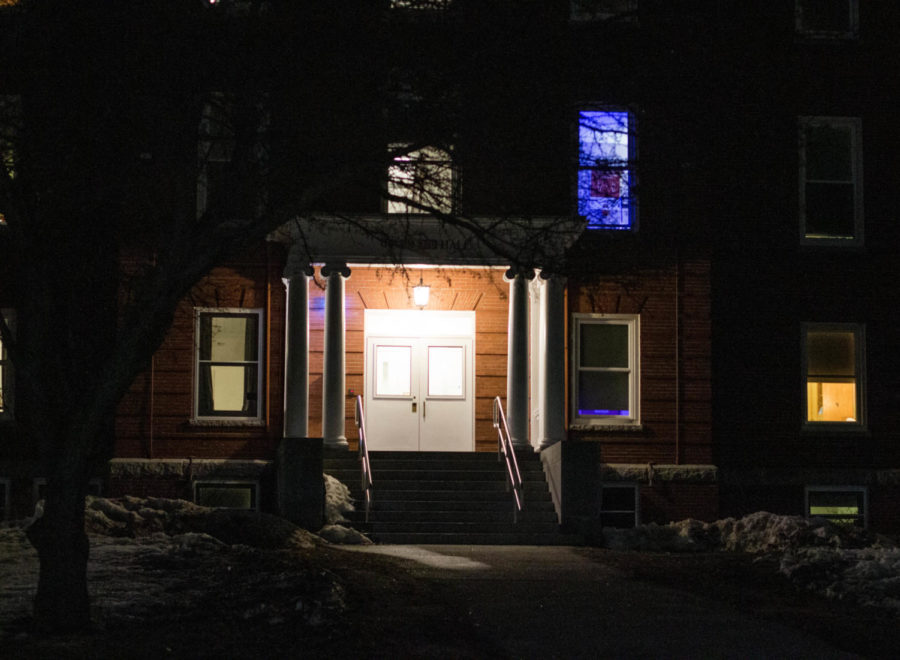 Two safety officers restrained and tackled a first-year student in Rand Hall on Friday night according to multiple student accounts and a video obtained by The Student.

The 20-second video, taken by a witness, shows the first-year being restrained and handcuffed by two officers while yelling loudly in pain. One officer, maskless and identified as Lead Campus Safety Officer Dennis Skinner, can be seen wielding his nightstick. The student is forced to his knees, while continuing to scream for help.

Once on his knees, one safety officer yells at him to “put [his] arms behind [his] back.”

The student, wearing pajama pants and a robe, is visibly upset throughout the entire altercation. A friend is heard in the background repeatedly telling the restrained student to “just relax.”

In an email to students Sunday afternoon, Vice President for Campus Life and Dean of Students Joshua McIntosh indirectly confirmed Officer Skinner as one of the officers involved in the incident. McIntosh wrote that Skinner had been placed on leave after an additional video of him describing differential treatment of white students versus students of color by Campus Safety officers was posted on Instagram Saturday night.

The identity of the second officer involved is unclear.

The Student was able to speak to the restrained student and four student witnesses who requested to remain anonymous as they are currently participating in conduct hearings related to the incident.

The restrained student said that the experience was incredibly traumatizing.

“I would never wish another student to experience what I did last Friday night,” he said. “The raw fear consuming me, the helplessness swallowing me — it lurks in me still. It feels like something completely apart from reality.”

A witness to the altercation stated that there were around eight to 10 students in the second floor common room of Rand Hall. He claimed Skinner entered the room and demanded to see all of the students’ IDs, prompting them to separate and walk away to avoid disciplinary actions; many of them did not live in Rand Hall, and alcohol was present.

Skinner then followed the student into the stairwell closest to 280 College Street, where the witness could no longer see what occurred. Despite not being visible, the witness “heard some loud crashing noises and yelling from down the stairwell.”

The restrained student said he “immediately began to panic” after being grabbed by a safety officer and asked, “Why are you grabbing me? You aren’t allowed to do that.” The student said the situation felt “scary and uncomfortable.”

He added that he was able to break from the grip of the safety officer and “bust open the door to the stairway.” The officer chased after him, and once alone in the stairwell, he claims the officer leapt onto him while “calling for backup security [and] wrestling [him].”

Concerned, the witness walked toward the noises and saw “an open nightstick laying at the bottom of the stairwell, and looked down the hall of the first floor of Rand to see two guards wrestling [the student].”

That is when he decided to take out his phone to record the altercation.

The restrained student said he “[doesn’t] really remember exactly what happened next — trying to remember brings deep guttural discomfort — but [he] ended up handcuffed by two unmasked security guards, awaiting the Lewiston PD.”

A second witness was in the hallway when the student and Skinner “burst through the door from the stairwell.”

The second witness added that he heard the first-year repeatedly ask “What are my rights?” and say “You can’t do this.”

The first witness told The Student that the restrained victim seemed to be in pain.

“The guards were restraining [the student] and arm barring him, twisting his arms to painfully prevent [him] from being able to move his arms,” he said. “There was commotion and a clear expression of pain on [his] face, as well as painful screams as the guards locked his arms and shoved him face first into the ground.”

The restrained student says he “struggled helplessly” while other students watched nearby.

The witness noted that after restraining the student, Skinner “stared straight ahead panting, almost hyperventilating out of nervousness… as his actions were questioned, but did not speak a word.”

The students were then informed that officers from the Lewiston Police Department (LPD) were on their way. Safety officers escorted the handcuffed student outside and the witnesses followed. One LPD officer spoke to Skinner away from the rest of the group, but it is not currently known what the conversation was about.

A representative for the LPD said officers were “just assisting Bates Security,” and refused to comment further, directing The Student staff to speak with Campus Safety for further information.

Afterwards, the restrained student was released from handcuffs and allowed to leave.

“No explanation was given as to why the police were called despite repeated questioning of the guards as to why,” the witness concluded.

The Student interviewed two additional students to discuss what they saw. According to a third witness, a group of approximately nine students were playing Jenga together in the common room. The student central to the incident arrived, sober, to hang out with them.

The witness continued that the student started to walk away once Skinner approached the group, prompting the safety officer to say “we’re not doing that today.”

Last week, multiple witnesses saw a different student, who looked similar to the restrained student, walk away from safety and hide when asked to show his ID. They believe that Skinner mistook the first-year for that student.

The restrained student confirmed that he told the officers he was going to get his ID and was grabbed immediately afterward.

After safely walking into his room, the third witness became alarmed when he heard screaming that sounded like “agony.” He left his room to see what was going on, and saw the student being restrained on the first floor.

A fourth witness, who was present for most of the altercation, saw Officer Skinner grab the student with such force that his shirt was pulled down low enough to expose much of his chest.

The officer was seen by multiple students putting his nightstick back in his belt, but The Student has no confirmed eye witness accounts of the officer ever using the nightstick on the restrained student.

During the incident, the restrained student also asked multiple times for the officers to put their masks on. The officers were either wearing their masks incorrectly or not wearing one at all, according to multiple witnesses.

When questioned by students about what occurred, Officer Skinner reportedly told multiple witnesses that the first-year hit him.

In response, the restrained student became even more upset, telling the students that he was tackled.

He reportedly confronted Officer Skinner in front of multiple students, saying that he was tackled and that the officer’s body flew through the door.

When a witness walked into the common room and questioned what was occuring, a Campus Safety officer reportedly responded, “Don’t ask me.”

The restrained student repeatedly asked Skinner why he decided to tackle him.

Due to the ongoing investigation, Officer Skinner was not authorized to respond to The Student’s request for comment, according to a member of Bates Human Resources who replied to the email in his stead.

Senior Associate Dean of Students Carl Steidel said that it was “difficult” to comment on the incident because the college has opened an outside investigation.

“We’re not in a position to provide too many additional details at this point,” he stated. “We’ve engaged an outside investigator so that we can really get the full story.”

Though they had not hired an investigator as of Monday afternoon, Steidel said that it will be “somebody who has experience doing investigations like this.”

After interviews are conducted and pertinent evidence collected, a full report of the incident will be made available to the administration; this process will likely take several weeks.

“We want to do it deliberately and carefully, but also move it along as quickly as we can,” Steidel said. He added that the result of the investigation will be made public shortly thereafter.

Steidel could not comment on whether the safety officer was called to the scene or whether he spotted the students while patrolling the floor.

Additionally, Steidel refused to comment on why the LPD were at the scene, but said that “generally speaking, the police do not show up on campus unless we ask them to come for assistance in a particular situation.” He declined to share who called the LPD in this incident.

According to Director of Campus Safety Paul Menice, the safety office has a use of force policy that allows officers to physically restrain students, use nightsticks, and employ pepper spray if necessary.

The escalation in the use of force, the policy explains, “typically follows a pattern based on the dynamics of the situation,” which may include “security personnel presence, verbal commands, compliance techniques (control holds), disabling pepper agents, and batons.”

Safety officers are expected to “only apply the minimum force necessary,” and “avoid unnecessary or excessive applications of force,” according to the document.

All of the student witnesses claim the first-year was slowly walking away from the situation and was neither intoxicated nor hostile toward the two safety officers.

There are no guidelines outlined in the policy as to when an officer should begin to use force. It states “good judgement, common sense, and training should form the fundamental basis for all decisions pertaining to pursuit, use of force, and efforts to detain.”

The use of force document also states that handcuffs should only be used to detain a student when “security personnel have articulated concerns for their safety, the subject’s safety, the safety of the others around them, or to gain control of the person to prevent further harm to themselves or others.”

According to multiple eyewitnesses, the restrained student was not a threat to himself nor dangerous toward others.

Menice told The Student that safety officers review the use of force policy every year. In addition, throughout the year the office brings in various speakers to learn new techniques for verbal conflict resolution.

The most recently completed training, according to Menice, was a form of de-escalation training sponsored by Residence Life in February of 2020. The refresher training, scheduled to occur two to three months ago, was cancelled due to the pandemic.

In addition, Menice told The Student that officers “very rarely” use physical force to restrain students.

Although he does not have an exact number of cases, Menice said there have “been a couple of incidents” since the altercation in Short Term of 2017 in which safety officers have physically restrained students.

If any students wish to report any information relating to this altercation, or other upsetting experiences with safety officers, they can report incidents here.

The Student has chosen not to publish the video for the privacy of the student involved.

CORRECTION: This article previously stated that the administration would have the results of the investigation by the end of next week. This is not true. Dean Steidel said the report would take several weeks to be completed.