Deansmen Look Forward to Semester Ahead 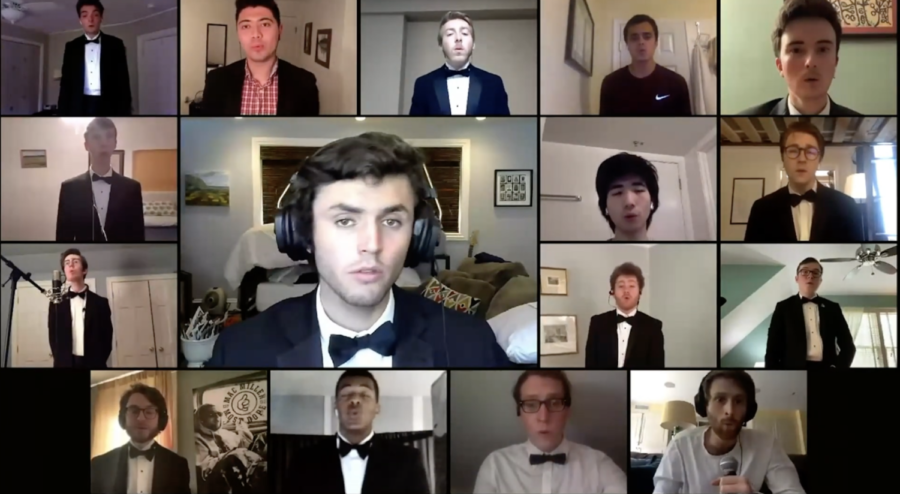 The Deansmen's submission of their most famous song “Change in my Life” by Rockapella to both the club showcase and the Bates Winter Arts Festival.

The most recognisable a capella group on campus is ramping up practices and dusting off their suits in preparation for the semester ahead.

The Deansmen are the oldest a capella group on campus, originating in 1957. The passion and enthusiasm for this genre has only grown throughout the years, even in the past when the group only had two members.

However, COVID-19 introduced difficulties into the group since they were not allowed to practice together anymore. They attempted to start up practicing in the fall, but nothing panned out according to Ian Robertson ‘21. This semester, the Deansmen have a plan, and they are sticking to it.  “We tried Zoom [but] that didn’t work out — our approach for now is to stick with what we know,” said Robertson.

Benjamin Seaman ’21 and J’von Ortiz-Cedeno ’22 agreed. However, when they refer to what they know best, they are referring to working together as a group. In order to replicate that, the Deansmen are planning to have a few members record a scratch track which will then get sent to the rest of the group to practice with.

Practicing this way has worked well so far; after all, they submitted a performance of their most famous song “Change in my Life” by Rockapella to both the club showcase and the Bates Winter Arts Festival. They will also be performing on March 16 during It’s A Great Day to be a Bobcat day, the annual event where parents, alumni, and fans of Bates College are encouraged to donate to the school.

When they perform this semester, particularly “Change in my Life,” Robertson said that he’d like people to see them as “a constant.” “Things are so tumultuous, especially when [we] were recording it, it was a glimpse to being back to normal.”

Ortiz-Cedeno, who joined shortly before leaving campus in March 2020, shared that he has missed being with the group and hopes to continue to grow with them. Though only being with the group for a few months, he has already done a tremendous amount of work with the Deansmen. For example, he has started running their social media profiles; one idea he has is “Meet the Men,” where each post features one of the Deansmen.

These posts are intended to attract more members. “We’re trying to get some new members and think ahead for the future. Even if we can’t get the same performances this semester, it’s good to get some new guys in the mix,” shared Seaman.

Until then, the Deansmen are continuing to focus on growth in other areas. “We’ve done some recordings that we [haven’t done] anything [with] yet, but there are talks to release those on Spotify,” said Robertson.