Take a Pause with the Bates Winter Arts Festival 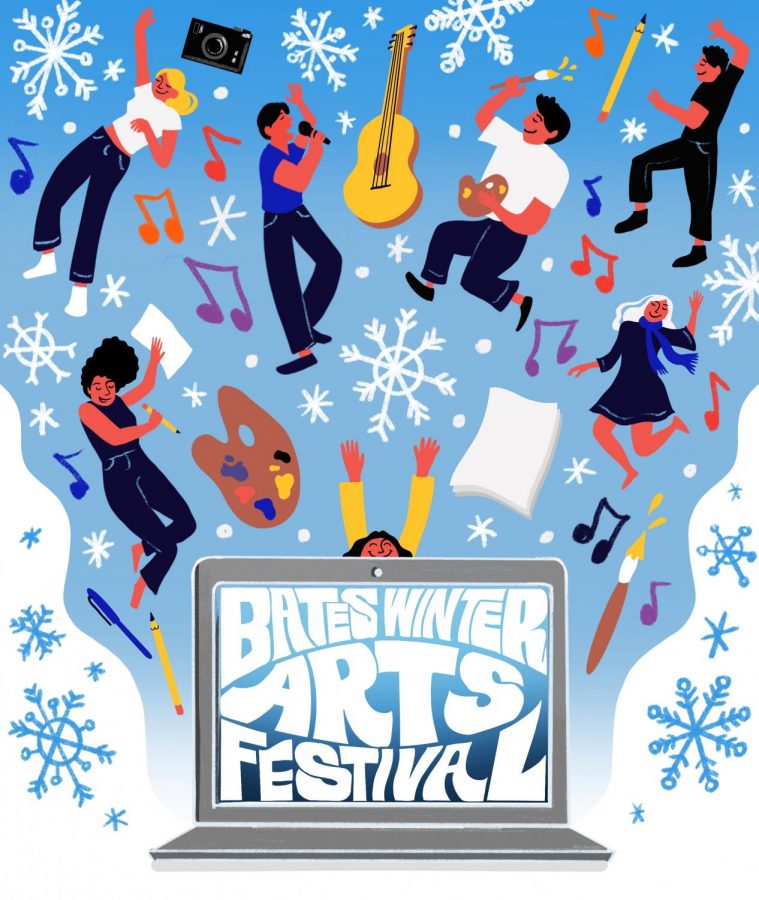 Currently streaming on the the L/A Arts YouTube channel, the Bates Winter Arts Festival offers viewers a chance to see all that the L/A community and Bates College has to offer.

Have you ever wanted to watch a magic show, or a dance show; perhaps a play reading? Well, with the Bates Winter Arts Festival, you can watch all those shows – and a few more.

Several of the performances submitted to the festival were also featured in the Bates Club Showcase last weekend, such as the Deansmen’s performance of a “Change In My Life” by Rockapella, Bates Spitz’s poem “Word Offensive,” and a piece by the Bates Ballroom Team. If you didn’t get to see the showcase, the festival gives you a chance to experience these, as well as a variety of other performances from Bates clubs and students.

The channel features a playlist of all the videos that were submitted and just by looking at the playlist before watching, one can see the immense diversity of talent that Bates has.

Kicking off the festival were the coordinators Anna Greenspan ‘22 and Kush Sharma ‘23, who introduced themselves and explained the reasoning behind the virtual festival. What we didn’t see were the countless hours of work and time that were spent putting this whole show together.

Bates Art Society submitted a beautiful video featuring the artists that make up the club and the different talents they have. Featured art included mediums such as photography, painting, scultipture, pottery, and sketching; one piece was even by The Student illustrator Yuri Kim. The video offered a great showcase of the club’s talent, but if you want to see more, the entire collection is featured on their website.

Ben Hoffinger ‘22 of the circus club performed a juggling piece entitled “Glow.” Hoffinger was shown in the dark juggling multiple glow in the dark balls that made him look more like a superhero juggling light. Accompanied by slow music and no outside sound, Hoffinger’s juggling was quite peaceful, a perfect video to watch and destress.

Luis Molinda-Rueda ‘20 showcased photography and an original song. The featured photography collections were titled “I was” and “Narciso en Redes,” created in 2017 and 2019 respectively. Both collections feature black and white photos of people doing everyday actions such as looking out a window or watching cars go by. Molinda-Rueda’s song was titled “Mares Disputados,” Fighting Seas, written in 2017. He performed it on the guitar while singing in Spanish.

Christina Wang ‘22 presented her poem “Elegy for Kevin,” a tear-jerking poem that features mature content. Yet, even in its heartbreak, the beautiful language Wang uses juxtaposes the tears and will make you appreciate the catharsis that poetry provides.

Oliver Penner ‘22 presented two short films entitled “Interveland Part 1 and Part 2.” Both films feature landscapes with different filters on them. The landscapes were duplicated and overlaid on top of each other to create an almost infinite effect. The movement of the landscapes and accompanying music are mesmerizing.

Abby Segal ‘23, who was recently featured on “Penn and Teller: Fool Us”, presented her own original magic. If you didn’t think magic could be done elegantly, Segal would sway that opinion quickly. Segal’s card tricks demonstrate her dexterity; it is impressive how she can cut a card deck multiple ways using only her fingers. Yet, her ability to slow down the trick to the point where you think you can understand what she’s doing demonstrates her artistry.

There were two Shakespeare monologues performed by Oaklea Elfstrom ‘20 and Ali Sheikh ‘23, who recited monologues from “A Winter’s Tale” and “The Merchant of Venice,” respectively. Both actors explained their selection and acting process as well as context for each of their monologues before performing them.

Craig Selbrede ‘22  presented a reading from his new web series Relic which is sure to be as fascinating and intriguing as his other two series. His YouTube channel, ACC Cinematic, features more of his work.

The Crosstones were also featured, and they presented their two arrangements “Who Knows Who Cares” and “Light On.” Both were masterfully composed and edited.

However, this just wasn’t a festival featuring only Bates artists: it was also the L/A Arts February Virtual Art Walk. Local Writers Read, whose goal is to feature Maine authors, also partnered with L/A Arts this month.

2020 Maine Literary Awards Short Fiction Finalist Claire Guyton submitted a short story, SAT question the moon, and a micro-story titled Like Shit on a Cracker. She read them for the audience. I loved hearing these stories, and I’d recommend exploring this amazing writer’s work.

Taken together, these videos meant something much more than each individual showcase. You may be seeking a sense of normalcy right now or wondering what life will be like in the new normal; surely we’ve all desired a sense of community through these months. A community is what I saw when watching these videos, groups of artists doing what they can to stay together and doing what they love.

The Bates Winter Arts Festival is more than just a festival. It does more than feature artists; it features our community – a community we are a part of whether we believe it or not and whether we see it or not.

If you want to see more L/A Art Walks, several of which feature Bates students, follow the link.