Hartshorn Reflects on Coaching and Recruitment amidst Pandemic 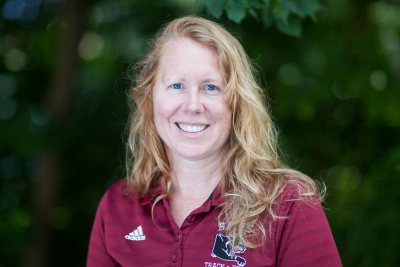 Coach Jennifer Hartshorn has coached her athletes to over 70 NCAA All-American performances and was designated NESCAC Women's Cross Country Coach of the Year in 2016 and 2019.

It’s not just athletes whose hopes have been dashed by the pandemic this year — coaches have also had to grapple with how to do their jobs in a way they never anticipated.

This year has been difficult for Bates athletes and coaches alike given the NESCAC presidents’ decision to cancel fall and winter competition, new safety precautions on campus, limited space to hold practices, and the looming uncertainty about the fate of spring competition.

The constant state of unpredictability that has colored the 2020-21 academic year is not how Head Women’s Cross Country and Track and Field Coach Jennifer “Jay” Hartshorn expected to ring in her 16th year at Bates.

Hartshorn has earned NESCAC Women’s Cross Country Coach of the Year honors twice, led the Bobcats to the Cross Country NCAA Championships four times, and has coached her athletes to over 70 NCAA All-American performances. However, despite Hartshorn’s extremely successful coaching career, the global pandemic has thrown her a curveball.

Reflecting on her past optimism, Hartshorn says that when students were sent home last spring, she was still prepared for a fall cross country season.

Once the reality of the year set in, Hartshorn was forced to adopt a different outlook on the upcoming year.

Despite the cancellation of fall competition, Hartshorn was still able to hold practice for on-campus students in compliance with the guidelines set by the Center for Disease Control, the State of Maine, and Bates College.

“Just being able to practice this fall was really great,” she said. “I will say we learned a lot from the experience. I think a lot of things we felt worked or didn’t work. We were able to change going into the track and field season, and I feel excited about that.”

Now that Hartshorn has moved from the fall cross country season to the winter indoor track and field season, the number of athletes she coaches has doubled. “I could go [on] forever about the challenges of having a team that’s so big right now,” said Hartshorn. “[That] we can’t all be in a space together is really challenging.”

Unlike the fall, where her athletes were practicing five times a week, Hartshorn has decided to hold practices every other day this winter while splitting her team into smaller practice pods.

“We’re now practicing at a much slower pace. A lot of this is a space issue because you can only put a certain number of people in Merrill.”

Despite these challenges, Hartshorn has remained committed to making practice a positive environment: “I’m working towards making practice a good, fulfilling experience, not just like we’re checking a box. We’re hoping that practice is more fulfilling by having fewer people and more coaches’ attention and engaging in more community-building activities.”

Hartshorn was grateful for her team’s ability to build and maintain a sense of community despite most team meetings and activities being virtual. Over winter break, Hartshorn organized for each class cohort of her team to take turns leading weekly Zoom meetings.

“I was happy to see that each class stepped up and had an opinion,” she said. “That was pretty cool because you want to keep the community going.”

“Bates is a place where you get on campus, and it feels comfortable. There’s a lot of recruiting by feel, and there’s a difference between what [recruits] feel when they’re on campus versus what they read [about Bates],” she remarked. “People choose Bates for a reason, and it’s way more helpful if they can be on campus.”

The cancellation of high school athletics nationwide and the NESCAC’s decision to suspend in-person recruiting, both on and off campus, have caused Hartshorn to adopt alternative recruiting methods.

Every couple weeks from July through August, Hartshorn and Assistant Cross Country and Track and Field Coach Arthur Feeley held recruiting sessions on Zoom for prospective athletes. Sessions were organized by focus: the first year experience, the ge

neral Bates experience, training, general Q&A’s, and a special session for parents. In many of the recruiting sessions, several athletes were present to provide first-hand information about their experiences under Hartshorn’s coaching.

“In all of the sessions, we had really good attendance, and we got some really good feedback,” said Hartshorn. “That helped sustain us at least through this fall.”

As she looks towards recruiting the next class of athletes, Hartshorn hopes recruits will be able to come to campus this summer. However, she anticipates some chaos once in-person recruiting is allowed to resume: “I know it’s going to explode. Every day there’s going to be a new family coming in. Everything that normally would happen over eighteen months could potentially be happening in three months. That’s going to be a challenge.”

In addition to the logistical recruiting challenges, Hartshorn will also have to deal with the uncertainty surrounding performance.

“There are so many weird unknowns because so much of the high school level of this sport has been impacted. It’s going to be different. We’re recruiting students who have had very little experience in track and field. Some of them have had four seasons in a row canceled now,” stated Hartshorn. “When we come out of this, our team will be in a really different place.”

Hartshorn is more than ready to bounce back once it is deemed safe to engage in intercollegiate competition. “It’s going to be so exciting when we can finally compete again, so I’m ready to be thankful for that experience,” she said.

“I’ve been thinking a lot about how to make this a very positive experience when we come out of it,” said Hartshorn. “I want us to be happy that we’re finally competing again and then, secondary to that, worry about our results.”