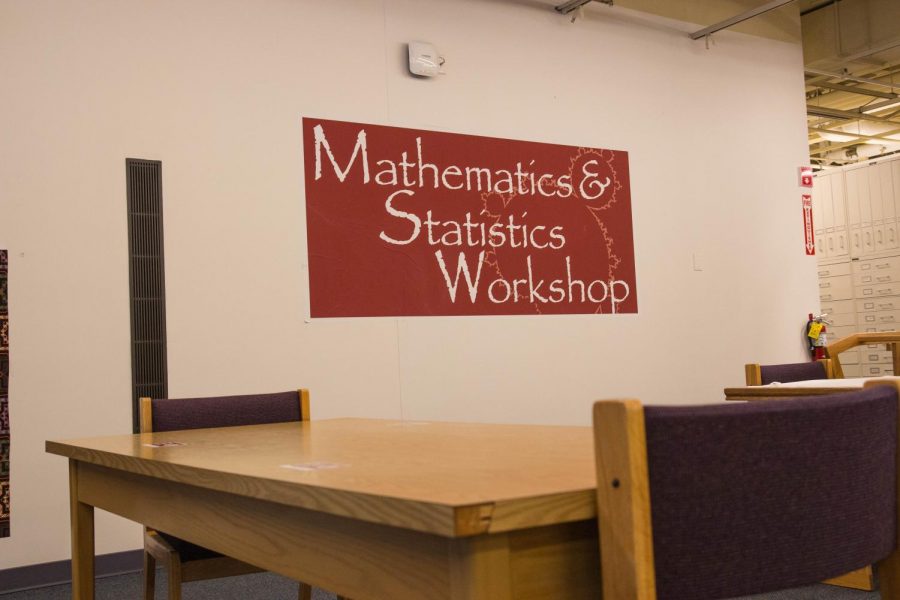 The MSW is a mainstay of Bates’ academic support services. This year, the MSW is offering in-person and virtual drop-in peer tutoring.

At the beginning of our conversation over Zoom, Grace Coulombe, the Director of Math and Statistics Workshop (MSW) and a lecturer in quantitative studies, asked me about my current understanding of MSW and what kind of experiences I have had there.

During Module A, I spent my fair share of time navigating the new hybrid model the MSW is using while taking Math 106 (calculus II). After my first calculus class, I remember frantically searching for MSW’s hours on their website and the panic that set in when I noticed what seemed to be a decrease in availability.

This year, the MSW is available for in-person and remote drop-in services Monday through Thursday 11 a.m. – 4 p.m. and Fridays 11 a.m. -3 p.m. I was well aware that the  MSW previously held nightly drop-in hours, even on Sundays, as those I knew who had taken the class before me had greatly appreciated them. This fear of not receiving enough help was soon resolved when I heard about the additional infrastructure that was going to be incorporated into the MSW’s student resources.

“There were a variety of changes, driven by protocols for the pandemic and public safety,” Coulombe said. Some of these included the decrease in drop-in hours, the removal of two thirds of the seating in Ladd Library, the inclusion of accessible remote services, and the increased structure and support for attached tutors.

It was a sigh of relief when the attached tutors from my class announced they were going to hold the night-time review sessions I needed. “For courses that always draw students to the MSW we use attached tutors, which are different than a T.A. because we want tutors to be there for the students exclusively,” Coulombe explained.

In pre-Covid years, there was only one attached tutoring session a week, and each class section had one corresponding tutor. But, due to the fast turnover of the module system, two sessions and two tutors per class section were necessary.

Since all MSW resources need to be virtual as well as in-person, one tutor monitoring an open Zoom window and the other helping the in-person students made the two attached tutor format more desirable. Coulombe also says that having more than one attached tutor allows for “more community” and it prevents them from feeling “isolated during this time.”

Molly Goldberg ‘21, one of the attached tutors and a veteran tutor for the MSW, says she is more inclined to be frequently available than she has in past semesters. “If a student signed up to meet with me and I needed to reschedule or cancel, I wouldn’t feel as bad in a normal semester because there wasn’t much of a difference between a Monday or a Tuesday. Now, so much can change of what is being taught between a Monday and a Tuesday,” Goldberg said.

Coulombe and Goldberg both pointed to a limited number of students who have been taking advantage of the remote services, and the students that are using MSW resources are still craving the in-person connection.

Goldberg has also noticed a drop in the number of students who are using MSW services in general. She explained that students used to be coming in for calculus support all day and there was an average of ten students coming in to the 7-9 p.m. drop-in shifts.

“Because we usually tutor so many calculus students in a 15 week period, I thought the fast pace of a modular system would result in dozens of students looking for support… I personally have engaged with less students than normal,” Goldberg said.

For Goldberg, the decrease in student engagement has made her role as an attached tutor much more challenging. As an attached tutor, it is important to make connections with students in the class in order to make them feel more comfortable getting help. The modular system allows for a limited time-frame to get to know the students beyond the four to five students who regularly attend the review sessions.

Planning for this year’s changes began before the winter semester in 2020 ended and when it became apparent that Covid was going to affect traditional modes of student support. Coulombe and Andrea Alford, the assistant director of the MSW and a lecturer in the humanities, attended many Zoom conferences to learn more about support and engaged in conversations with colleagues from other institutions that run similar tutoring centers weekly.

Coulombe explained that it was difficult to move forward with planning “because of the state of uncertainty” and “they didn’t know what the fall would look like.” MSW leadership was also unaware of what their budget would look like come the start of the semester, or if they could hire remote and international students. “We were constantly waiting for other people to answer questions in order to move forward on plans, which made it challenging,” Coulombe said.

Over the summer, MSW leadership did gain the help of intern Lucky Wickham, a sophomore mathematics major at the College of Wooster. Wickham’s main accomplishment was the creation of a Lyceum page of resources for students entering calculus I that includes interactive videos, practice problems, and step-by-step solutions.

“This page was created as a replacement to the in-person review sessions that are normally hosted at the workshop that had to be cancelled due to the pandemic,” Wickham told The Bates Student. Wickham also researched tutor training course materials and helped host a webinar about remote learning over the course of the internship.

Eventually, it was announced that the MSW would receive no significant budget cuts for the year, but financing the new changes was still particularly difficult. The offering of all in-person services as additionally remote requires tutors to sit in Zoom windows, often without anyone showing up, while still getting paid.

“It is unfair to have tutors use their time and not get paid, especially for work-study students, but it is tough to spend that money when no one is taking advantage of that support,” Coulombe said. Reducing the number of drop-in hours and doubling the number of attached tutors has further made dividing up their budget more arduous than usual.

“I wish I had more money to have more drop-in hours to address students in other time zones,” Coulombe added, “as the current hours are better for those who live in the United States, but compared to other departments on campus we are very lucky.”

Goldberg also noted the stress of managing the MSW’s “tight budget” as she watched supervisors Coulombe and Alford, have no choice but to reduce hours and staff a tutor or two less than usual during some shifts, but she commends them on their ability to overcome the adverse conditions and prevent the direct loss of hours to anyone on staff.

After the completion of my calculus II course, I can firmly say that I received the help I needed from the MSW to be successful. Despite the enormous amount of changes the MSW has gone through over the past year to comply with public health policies, they have maintained their commitment to the support of all students.