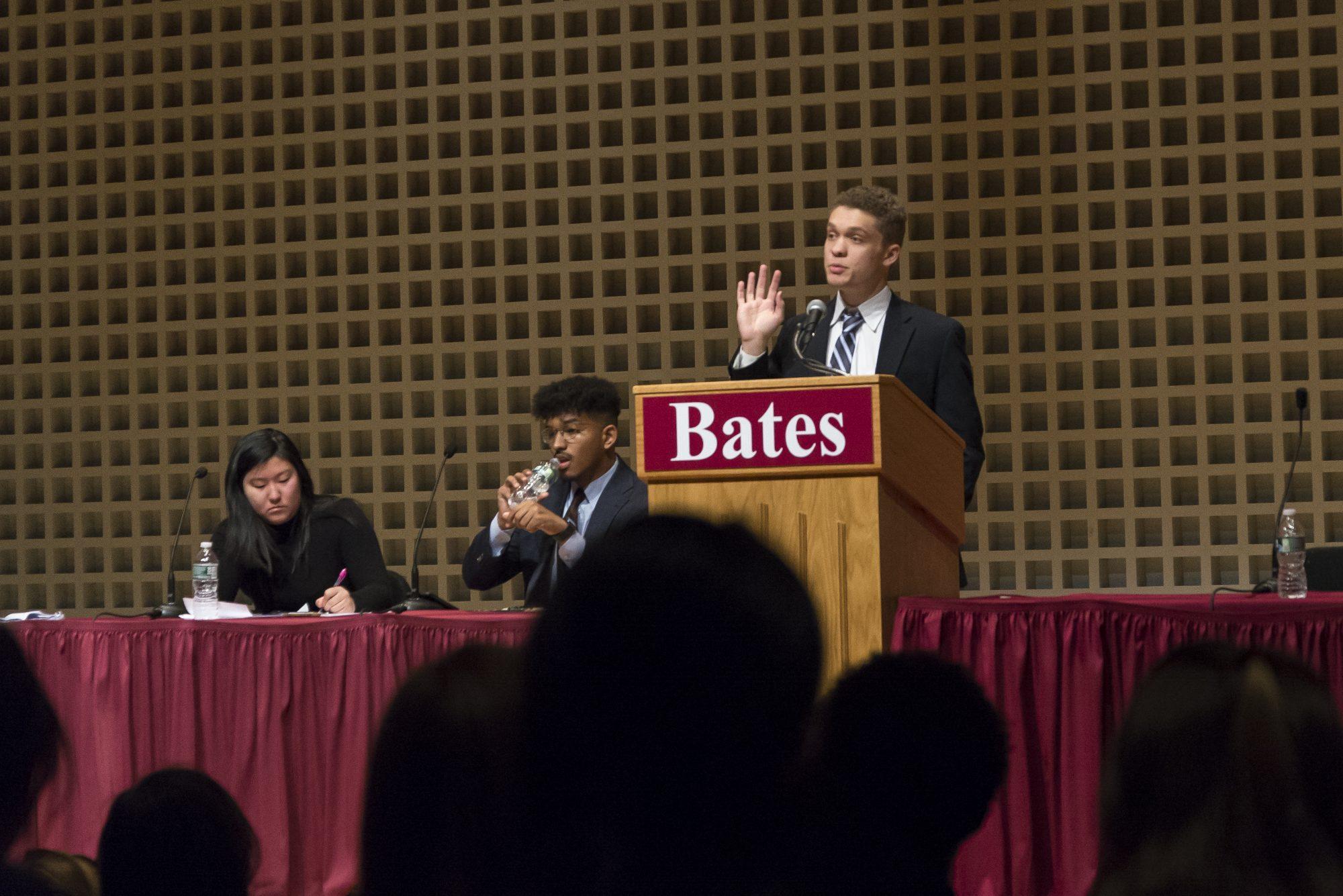 The annual Reverend Dr. Benjamin Elijah Mays debate serves as one of the longest and most popular traditions of Bates’ Martin Luther King Jr. Day programming. Each year, Bates’ Brooks-Quimby Debate Council (BQDC) partners with the Morehouse College debate team to argue an agreed upon resolution. Benjamin Mays – an American civil rights icon and mentor to King himself – was an alum of the Bates class of 1920 and served as the sixth president of Morehouse College, thus laying the foundation for the Bates-Morehouse connection.

The motion discussed during this year’s debate was as follows: “This House regrets the portrayal of the Union in the Civil War as a morally righteous actor.”

This year’s debate was moderated by Joey Amiel ‘22 of Bates. “Dr. Mays links the institutions of Bates and Morehouse,” started Amiel, and this annual debate tradition is proof of his enduring legacy. But this story’s also relevant because of this year’s theme: “Confronting our History: Justice for Coming Times. Both Bates and the BQDC entertain a narrative of egalitarianism and inclusivity that, when compared to the actual histories of both institutions, fails to live up to reality.”

Such an inconsistency between intention and effect, argued Amiel, signals a necessity for decisive anti-racist action. “We all have an imperative to continue to work towards an equal society, and not to let our whitewashed histories blind us to everyday injustices.”

Strickland began his opening statement by invoking the deadly far-right storming of the United States Capitol on Jan. 6. “I think it’s especially important,” stated Strickland, “with the seditionist armed insurrection that we saw at the capitol just a few days ago to consider two things…firstly, that we either [A]: live in a world in which the South won the ideological war at the conclusion of the Civil War or [B]: that the Union won and that the continuation of the victors’ policies are one that are not ideologically different enough from the South insofar as the continuation of those policies still stands today.”

The legacies of slavery and engrained white supremacy, argued Strickland, had hardly ceased to exist once the Union army claimed victory in 1865. Nor, he contended, was the Union somehow blameless even at the time of the war. “We also have to understand,” started Strickland, “that during and immediately after the war, we see that Union conduct was something that saw the rape and pillage of enslaved Black Americans all the same…Oftentimes, when Union soldiers would go through and liberate a town or liberate a city down South, they would often take their own payment in the form of Black lives.”

As such, Strickland posited that a universal characterization of the Union as solely good lacked nuance and historical understanding.

Melcher pushed back against this argument by examining the idea of the creation myth. “The way that the Union is discussed and is discussed in person-to-person conversations is not of huge historical depth but rather a conversation based on the morals that come out of those stories.” The normative moral characterization of the Union, argued Melcher, was akin to the universal historical stories told to children – such as George Washington crossing the Delaware, or the signing of the Declaration of Independence – whose moral lessons were more important than the veracity of their historical details, citing MLK’s invocation of the Declaration of Independence in his seminal “I Have a Dream” speech.

“What do we get when we have universal beliefs across different political structures of American society?” Melcher said. “You get the ability for progressive movements to create changes across the aisle…We think that if the words of the Declaration of Independence had been condemned [by King] in 1965, it would have only driven the country further into a divide. MLK instead used these shared values that themselves were problematic when they were written, because he knew that white America, in their ignorance, also believed in the cause that was written in the Declaration of Independence.”

Appealing to common moral beliefs – such as the virtues of the Union over those of the Confederacy – allows for progressive movements to reach a broad base of people, and establish a basic moral understanding of right vs. wrong across demographics.

Gyauch-Lewis began his rebuttal with a question: “Ultimately the question that we are talking about here is what should we be striving for? And I do not think that the Union is a particularly good model to base that off of.”

Morality. argued Gyauch Lewis, required a commitment to truth in order to function. While universal moral understandings are important, they cannot operate without a basic acknowledgement of fact. “In order to actually have any of these shared understandings, we have to have some level of devotion to critically interrogate our own history and to actually come to a set of truths that is reasonably representative.”

Refuting his opponents’ previous claims about the importance of historical and moral messaging, Gyauch-Lewis offered a critique: “I think insofar as they are literally defending lying to the general public about the legacy of the Union, they are not able to access any form of any solution that will actually make the world a better place.”

Edwards offered a counter argument to his opponents to defend the resolution, acknowledging the lack of political resources Black and Indigenous Americans had other than the Union during the Civil War. “There is something fundamentally necessary in understanding that the Union at the time was the best thing that BIPOC had access to. Yes, we can address the fact that, as Dylan says, there are horrible actions. However, we’re not talking about the actions here. We’re talking about what it means in the status quo for us to look at the Union as important, because its values were fundamentally about crushing insurgency.”

The month’s previous events, Edwards warned, demonstrated the dangers of enabling white supremacists to commit violent insurgency against the state.  “All stories must have heroes and villains to effectively teach the morals in which we give. This is not about the morals of unity, of connectivity, about the ways in which we decolonize our mindsets. This is about what it looks like when we allow people who believe that they are not only above the law, but have the freedom to harass and harm those who are citizens of the state to believe that they can intrude onto government spaces.”

While the state could never undo the harm it incurred onto people of color, Edwards argued that we can reflect back on our own history and say: “If the confederacy had not been stopped, what happens?”

The debaters then proceeded to take questions and further engage with one another’s arguments. Finally, the participants thanked one another, as well as the audience, for their engagement in the dialogue. .