Bates Planned for a January Return. Will it Happen? 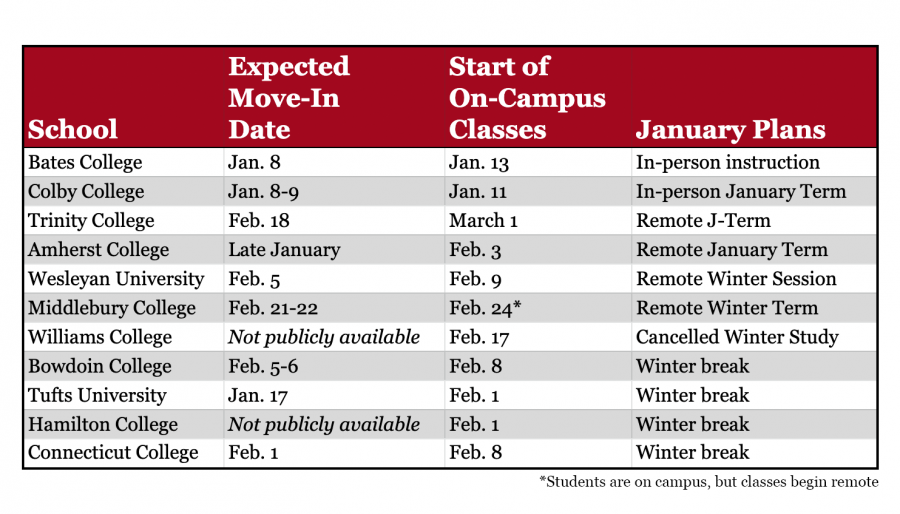 At the time of publication, Bates plans to invite students back to campus on Jan. 8 to begin in-person classes days later. In the context of the NESCAC as a whole, Bates’ plans stand out. No other NESCAC — except for Colby — is planning to resume in-person classes in January.

Bates’ projected move-in date sits approximately two weeks after Christmas and a week after New Years, two major holidays with a high risk for unsafe congregation and inter-household transmission. The uptick in positive cases in the weeks following Thanksgiving has led Dr. Robert Redfield, director of the national CDC, to state that December, January, and February are “going to be the most difficult time in the public health history of this nation.” According to the Bates dashboard, Maine intensive care unit (ICU) bed occupancies were measured at 77%.

Perhaps anticipating these holiday surges, many NESCACs factored in a delayed return to campus, pushing back the start of in-person classes until February. Williams cancelled their January Winter Study — their version of Short Term — back in May, choosing instead to return for the second semester Feb. 17. Bowdoin, Hamilton, and Connecticut College have similar academic calendars.

Colby, similar to Bates, is planning on returning Jan. 8-9 as of now.

Following the Thanksgiving holiday, COVID-19 is spreading rapidly throughout the U.S., with many states experiencing their highest positivity rates thus far in the pandemic. As cases increase, hospitalizations and deaths from the disease have steadily risen, with both having reached record numbers in the past few days.

Maine is no exception, as the state has experienced a surge in cases over the last month following a relatively low amount spread throughout the spring and summer. According to the Maine CDC, as of Dec. 3, the seven day positive case average sits at 227.7 cases, a stark difference from 28.4 cases on Sept. 2, the start of the fall semester.

Bates and Colby stand alone as the only two schools moving in students in early January. The institution hopes that the twice-weekly PCR testing and stringent social distancing restrictions will be enough to mitigate COVID-19 outbreaks on campus as it did in the fall, but the stakes will be higher for the winter semester. Every other NESCAC has also operated with frequent surveillance testing and similar restrictions, and they don’t intend on reopening until February.

Tufts is something of an intermediate. The university plans to open dorms Jan. 17 and resume in-person classes Feb.3 However, an extra week will allow the university more time to assess the state of the pandemic and make necessary changes.

As epidemiologists prepare for yet another surge following Christmas and New Years, it appears increasingly likely that Bates will need to consider adjusting its academic calendar or beginning the second semester with remote learning.

The agenda for the faculty meeting Monday was updated last week to include a discussion with Bates’ medical consultants. It is rumored that potential changes to the academic calendar may be discussed at this time.