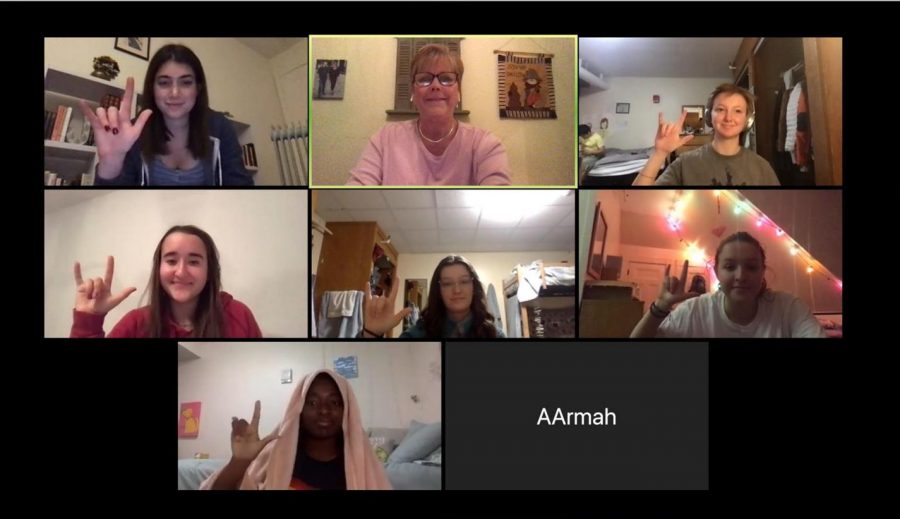 Josephine Levey '24, top left, recently created the ASL club at Bates. Students are signing "love" in the above screenshot of the club's first meeting.

When considering adding a new language to their repertoire, some Bates students may decide to take a Spanish class or try French out; others may choose Russian or Mandarin. However, a language that many people may overlook is American Sign Language (ASL).

ASL was developed in the 19th century, and about 250,000-500,000 Americans use this language. Because it isn’t taught at Bates, the ASL club formed this year to introduce students to the language.

Josephine Levey ‘24 has always wanted to be bilingual, but she has struggled picking up foreign languages. She said she chose to study ASL because for her it was an intersection “between a foreign language and a familiar one.”

Levey decided to start the club now because in times of COVID-19, when everyone is wearing masks, the deaf community has struggled since lip reading is no longer possible to aid in comprehension. “It was the perfect time to start a club…The more people can learn to communicate with the deaf in other ways, the better.”

Finding an instructor for the club was a bit tricky. Levey emailed Bates faculty, but no one personally knew ASL. However, one professor’s child had been taught by Robin Sidders, a local ASL instructor, in school. Robin was eager to join Levey and teach more people about Deaf culture and ASL.

Every other week, Sidders provides a lesson plan for club members. Members who attended previous lessons usually review and continue to practice. So far, members have learned how to fingerspell as well as the signs for colors, numbers, and Thanksgiving terms. Levey hopes that once members have developed a base vocabulary, they will be able to practice conversations.

The club doesn’t have any specific goals set this year, other than spreading the word about ASL. Levey has been surprised by how many people have already expressed interest in joining, giving her some confidence that the club will continue to grow.

The club’s ultimate goal is to provide an opportunity for Bates students to not only learn ASL but also become educated about the deaf community. So far the club hasn’t had the opportunity to work with other clubs, but they have discussed working with the Special Olympics Club once members are more proficient with the language. They are also hoping to get involved with other events next year since this year has been difficult due to the pandemic.

Although the club is pretty new, Levey’s favorite memory thus far was the first meeting with Sidders. In such a short period of time, the members made real progress and she was proud of all of the club members. “In that moment, I saw how much potential the club had and how many Bates students might actually be interested in joining!”

The club currently meets over Zoom on Mondays or Tuesdays from 7:30 – 8:30 p.m., but they will not be meeting over break. If you are interested in joining or have any questions contact [email protected].

Get out of your comfort zone, Bobcats, and try the language where your hands do all the talking.