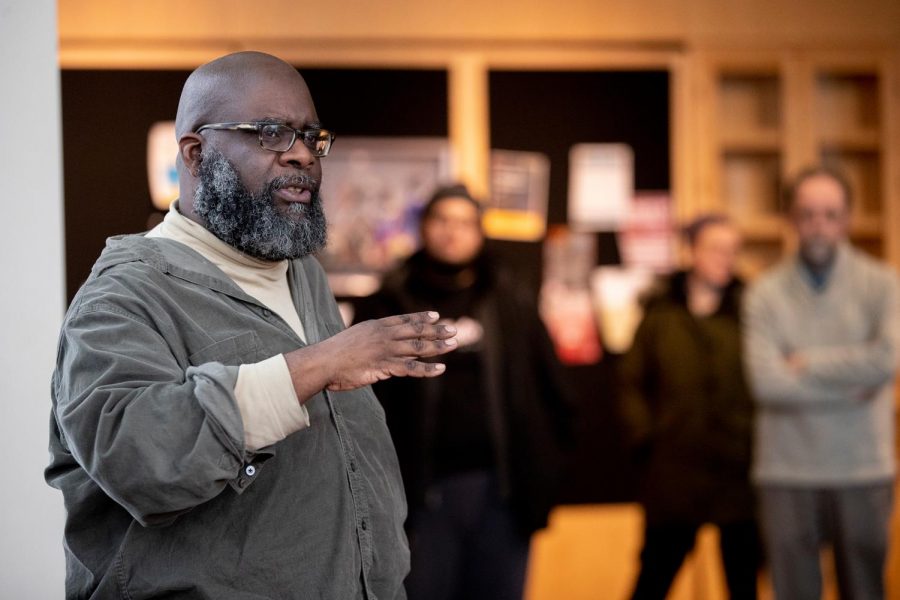 Odle began teaching at Bates in 2017 and was recently offered a promotion from lecturer to a tenure-track position. He will become an assistant professor of theater beginning in the 2021-22 academic year.

Playwriting is a rather nebulous area of study – does it belong in English, with the other creative writing disciplines, or in theater, the art that could not exist without playwrights? There are merits to both sides of the argument, but here at Bates, it has become a bit of both. For the past several years, Clifford Odle, first hired as a lecturer of theater in 2017, has been working to firmly center playwriting as an important component of the Bates theatrical experience.

Several of his plays have been performed at Bates. A series of readings of short plays and “A Deerfield Homecoming” were performed in February 2020 as part of Black History Month, and the Boston cast of his play “The Petition” brought the show to Bates as part of the 2020 Martin Luther King, Jr. Day programming.

Odle began his theatrical experience as an actor in an eighth-grade production of “The Wizard of Oz,” where he played the Cowardly Lion. “The reaction from my friends and everybody in there was just awesome. I remember it to this day, just remember all the screaming and cheering…I just wanted more of that,” Odle shared. Throughout high school and college, he continued to act, and eventually got an MFA in directing from Boston University (BU).

While completing his MFA, Odle was given a second opportunity to work with playwright August Wilson on an out-of-town tryout of Wilson’s play “Seven Guitars.” The play would go on to be nominated for the 1995 Pulitzer Prize for Drama.

Odle previously served as an understudy in a production of Wilson’s “King Hedley II.” Musician Max Roach worked on the show, and during slow times, Odle and Roach got to talking and sharing stories. These conversations inspired Odle’s play, “Lost Tempo,” which became the graduate thesis for his second MFA, this time in playwriting.

Much of Odle’s work looks at the African-American experience “in places that we don’t usually think about,” especially in colonial times, which grew out of his experience working as a tour guide for the Boston Freedom Trail. All tour guides play real historical figures; Odle played Barzillai Lew, who fought at the Battle of Bunker Hill. As he did his research, he found himself discovering more and more stories about African-Americans during this time period.

“It’s stories like that that get me really excited because they’re not whole in any way, shape, or form…It really opened up this avenue of writing about periods of history and seeking a certain amount of representation of the Black image in those periods,” he said.

After teaching at the University of Massachusetts-Boston for a couple of years, Odle was contacted by a former teacher from BU who said there was an opening at Bates for a professor to come in once a week and teach playwriting. He applied for the position and was hired, thinking it would only be a commitment of a semester or so as Bates figured out what they wanted the full-time position to look like.

“When the [full-time] lecturer position became open, I was a little iffy because I was already in a lecturer position [at Boston]. Did I want to leave one lecturer position for another with no guarantee of getting tenure at all? So I really thought long and hard about it,” Odle, who had not thought of leaving Boston, said about his decision to take the job.

Boston’s high cost of living meant Odle was constantly working, which made it difficult to care for his wife, who was battling Stage 4 cancer at the time and later passed away in late 2018. With lower living costs in Maine, Odle and his family decided to make the switch, trading in “the business of Boston for a calmer life in Maine.”

This summer, Odle was offered a position at a high school in California after a call from an undergraduate professor. He mentioned it to people at Bates, but expected that he would be leaving because “given the situation that we’re in, you know faculty salaries being frozen and things like that, there was no way they could actually give me the thing that I would want.” To his surprise, Dean of Faculty Malcolm Hill offered him a tenure-track promotion. “It put the brakes on everything,” Odle said.

“Ultimately, I had a mission here, and the mission here was to build the playwriting program,” he said. “I felt a place here, I felt an urge here, I felt a particular need for the skills I could bring to the table. And you know, let’s be honest – it is my skills and experience that brought me here, but one of the things that does keep me here is the fact that representation is needed, representation of people of color on the faculty level is needed. I’m glad that they saw the value that I could bring, not just as a Black face but as a person who’s got some skills behind them.”

Odle is one of two faculty members of color in the Department of Theater and Dance, and the only person of color in the theater program. This semester, he has been working with a group of theater and dance students to create the Student-Teacher Advisory Council (STAC), a student-led council for promoting equity, inclusion, and transparency within the department, which will take office in the winter semester.

“I’m glad to be a part of some of the solutions that need to happen here at Bates,” Odle said. “I just know that many of those solutions need to go beyond just having Black faculty. There is a lot of learning that has to happen on all levels, there’s a lot of awareness that has to happen on all levels…You know, what does it mean to keep going back to that ‘Hey we were part of the abolitionist movement!’? And that was great like twenty years ago, but right now we know we need more.”

His one piece of advice for Bates students is that “your four years here are not the be-all, end-all. When you graduate here, there’s a good chance you’re going to do something else than what your degree is. That does not mean that you’ve wasted your four years because whatever else you get into, you’re going to have a wealth of knowledge that will give you a unique step into whatever else that you’re doing.”