After Historic Election, Student are both Excited and Wary about the Future 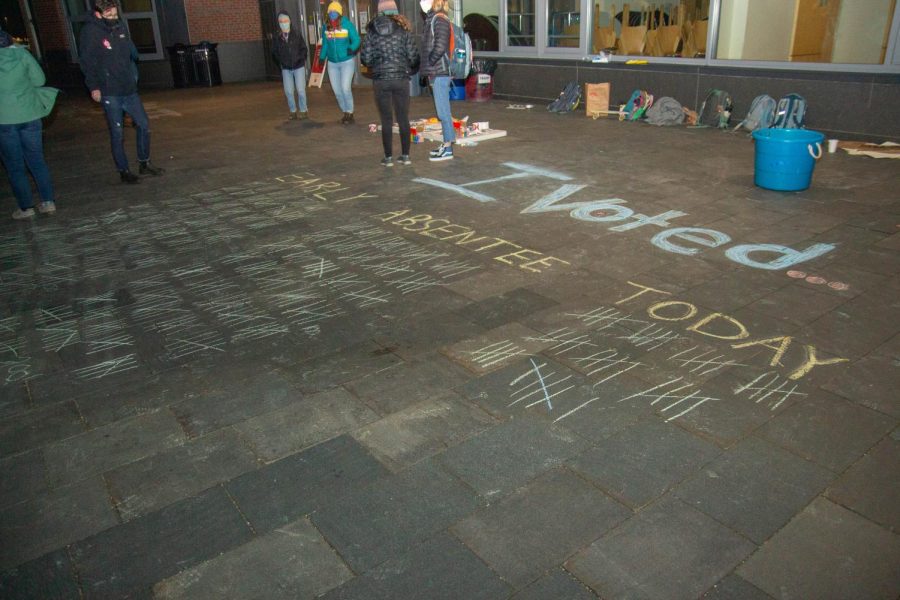 Bates Votes volunteers recorded a tally of student voting methods outside of Commons.

In 2016, some members of the Bates community were devastated by Donald Trump’s win. The day after the election, students cried in Commons, and some professors cancelled class.

The 2020 election was different for a number of reasons. Due to a record number of mail-in ballots, the results pointed toward Trump at some points on election night, but slowly turned in Joe Biden’s favor over the next few days.

Saturday morning, after a drawn-out, anxious wait, news networks finally named Biden the winner; however, Trump still has not conceded.

It was a record-setting ticket. Biden is the oldest man elected president at 78 years old. His running mate, Senator Kamala Harris, will be the first female, South Asian, and African-American vice president.

Student reactions to Biden’s victory varied. Some expressed unreserved enthusiasm for a Biden presidency while other students were more cautious, hopeful for a better future without Trump in the White House. A number of students remain unconvinced that Biden is the leader the U.S. needs.

Seven students shared their thoughts on the election, Biden’s victory, and the future of the nation as they see it.
A BURST OF ENERGY
Maddie Lee ‘24 was in the middle of a hard track workout when she found out Biden won. Groggy and tired, the news brought a jolt of excitement to her day.

“All the other girls who weren’t doing the [next sprint] were screaming,” she said. “We thought maybe the workout had gotten cut short, we were so confused…Everyone was celebrating, but then it just didn’t feel real.”

While she recognizes that a change in administration will not fix America’s problems, she said she was hopeful for what is to come.

“I think it’s just such a breath of fresh air. We’ve been holding our breath for weeks and weeks, probably four years. I didn’t want to imagine what it would have been like if it had gone the other way,” she said.

As an added bonus — Lee said her grandmother went out on the porch and yodeled for the whole neighborhood in happiness. “So cute, but that must have been quite a site!” she said.
LESSER OF TWO EVILS
Kyle Larry ‘21 isn’t ready to celebrate just yet. He is glad Trump lost, but remains troubled that Trump retains a loyal following.“The fact that so many people voted for [Trump] just shows you how white this country truly is,” he said.

Larry is particularly concerned with police reform. He believes that the police can be dismantled, paraphrasing a message from Representative Alexandria Ocasio-Cortez: “What would [defund the police] look like? It would look like the suburbs.”

Larry’s lived experience has shown him first-hand the disparities in policing. He is hopeful, but not convinced, that Biden will bring meaningful change to the criminalization of Black people and the militarization of the police.

He believes that the election of Barack Obama in 2008 led some people to view the U.S. as a “post-racial” society. This, he said, is far from the truth.

“Just because he’s the lesser of two evils doesn’t mean he isn’t evil himself,” he said. “So yes, it’s phenomenal that Trump lost, but at the same time that he was even a candidate, that shows you how white this country truly is.”
A TALE OF TWO BEGINNINGS
Stella Terry ‘24 is feeling more hopeful about politics than she has before. However, she said the week leading up to the election, and the days following, were tense.

“As I would go around the campus, the question ‘How are you?’ was almost [always answered with] ‘I’m stressed’ or something like that,” she shared. “Going into the election, a lot of people didn’t know how it was going to play out with the coronavirus and how everything would happen.”

A resident of Oregon, Terry registered in Maine for her first election. She wanted a say in the senate election, and felt her vote would be more meaningful in Maine’s second district, a swing region which has a single electoral vote.

She was disappointed that Sara Gideon lost her election campaign, but buoyed by the prospect of a Biden-Harris administration, making sure to emphasize her excitement for Harris.

Like many underclassmen, Terry said the Trump years have shaped her perspective of politics in the U.S. Now, she is looking forward to a more conventional era with Biden and Harris.

“When I was a freshman in high school, Trump was elected,” she said. “Now I’m a freshman again, and Biden is elected. It’s just really interesting to me that I’m in these two beginning stages of my life [and] two different presidents coincide with that.”
NOT MY FIRST CHOICE
Not all students voted for Biden or celebrated his win. According to a recent survey by The Bates Student, approximately 6% of the entire Bates community and 5% of students voted for Trump. Luis Orozco ‘23 was one of them.

Orozco, who identifies as Latino, voted red this election because he felt the Republican Party’s platform best aligned with his views  — climate change policy being an exception.

“I felt what was really going on behind the scenes — the policy, the groundwork — was really benefiting my community; it was in line with my principles and ideologies in terms of health care, welfare, and police reform,” he said.

He said that he is proud of the progress the Republican Party has made this election with increasing support among men and women in the Latino, Black and LGBTQ+ communities.

Although Biden was not his first choice, Orozco said he is hopeful for the future. He said he understands why Biden was elected and hopes that a moderate president will be able to foster a culture of compromise and bipartisanship within the government.

“Even though Joe Biden wasn’t my choice, I’m still happy with it because I do think he’s going to do great things for the environment, and I think he’s going to be the choice that helps us to move forward…Biden, who tends to come off as a moderate, he kind of fosters the political environment where you don’t always have to vote the way your party wants you to vote, or the way you’re supposed to vote. You can vote the way you actually think,” he said.
THE CLIMATE CRISIS CAN’T WAIT
Cameron Anderson ‘24 believes that climate change is one of the most pressing issues of our time. Worried about another four years of inaction under the Trump administration, Anderson said he is relieved Biden will soon take office.

“Climate change is such an urgent issue that we don’t have any time to waste on not doing anything,” he said. “I think this has been a decisive election and there’s more of a hope for climate action — although it’s still pretty grim.”

He hopes that Biden will help unite the country and ease tensions between people with different political ideologies.

“I feel like Biden is more of a unified candidate, and I feel like Trump is a very divisive figure,” he said. “I think that with Biden in the White House, presumably, I think that people will be more able to have conversations with people about politics because it’s so hard to have a conversation with someone else about Trump.”
PREMATURE VICTORY SPEECH ‘UTTERLY EMBARRASSING’
Frank Alvarado ‘21 was nervous watching the results of the election come in; he knew from the start this election would be different due to the record number of mail-in ballots.

Alvarado is happy Biden pulled through in the end and is particularly excited to see Harris in the White House. He hopes that they will stand up for BIPOC rights and lead the way for police reform.

“The mobilization that we saw of people voting was really huge,” he said. “It made me really happy because you got to see more people involved in this because it showed that people actually cared about what was going on in this country these previous years, things like Black Lives Matter, all of that, has helped people exercise their rights to vote. I hope it continues to be that way.”

Alvarado said that election week really underlined how unfit Trump is. “Just seeing the way [Trump] managed this week has been utterly embarrassing for the country on the world stage. Specifically, I’m thinking of [election] night,” he said, referring to Trumps’ premature victory speech delivered at 4 a.m. calling for states to “stop the count.”

Alvarado is also concerned by the prevalence of fake information and claims of a “stolen election.”

“There was a lot of misinformation being thrown around, obviously, and I feel like a lot of people owe it to themselves and everybody else to not take things for granted as they see it, they need to do their own research.”
NO FAITH IN THE POLLS
Harry Stevenson ‘24 was shocked that the polls could be so wrong again. In 2016, most polls projected a resounding victory for democratic candidate Secretary Hillary Clinton; instead, Trump won a decisive victory. Again, in 2020, the polls predicted a smooth victory for Biden. And while he picked up some surprise states, including Arizona and Georgia, he won by razor-thin margins in crucial swing states, namely Wisconsin and Pennsylvania.

Stevenson expected Biden to win because of the polls, but remained cautious. “I was shocked again, I feel like the polls have lost all their validity,” he said. “I just don’t understand how they’re consistently incorrect.”

He pointed to the senate race in Maine as another example. He said that polls tended to give Sara Gideon a slight edge over Susan Collins, however Collins easily won with an eight-point lead.

He thought the election would go smoother, but is happy to finally have some sort of conclusion, even if he isn’t quite sold on Biden yet.

“I think I’m OK with Biden, but I look at the track record he’s had over the past forty plus years, and I really haven’t seen a lot of action in that. Although, I think he’s 100% a better dude than Trump.”

He said he is also worried that Harris’s policies are a bit too “radical.” However, he is willing to give them both a shot.