Fall Athletics in Review: How Did Athletics Fare with COVID-19? 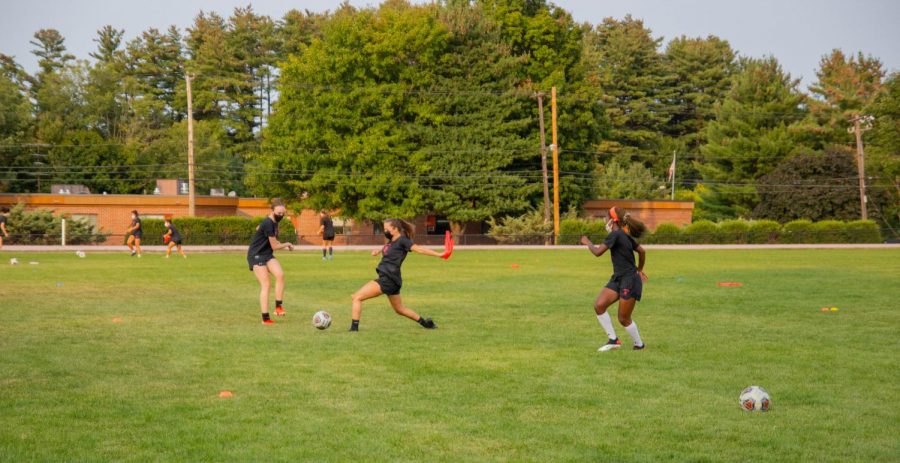 Women’s Soccer was able to modify existing drills to comply with the COVID-19 guidelines.

Amidst what has been a challenging fall, to say the least, Bates Athletics has done its best to brave the conditions and forge ahead with practices and training. With collegiate competition being non-existent for the foreseeable future, it goes without saying that sports here and across the country were, and will continue to be, vastly different than in other years.

Here at Bates, the return to practice has been a slow and controlled one, as specified by the sports medicine guidelines regarding the resocialization of sports. Initially only allowing for groups of less than 10 to practice together for less than one hour, the protocols were successful enough, eventually allowing for groups of 20 to practice together for up to two hours. For many programs, this was enough to have virtually the whole team training together, but the effects of the COVID-19 guidelines varied from team to team in practice.

For women’s soccer coach Joseph Vari, the fall was still a fruitful and productive time in terms of individual player development.

“The restrictions were frustrating of course at times, but looking back it had a really great silver lining for us as a team,” he said. “I was the only coach that [the women’s soccer team] had on campus this fall, so being limited to small groups was helpful as it allowed me to focus more energy on the team. In the end, the small groups limited us to be together as a team, but allowed me more individual time with all of our players.”

He continued, “In the end, some of our favorite exercises only needed minor tweaks to fit into the restrictions. We had more cones … than normal … to let the players know about boundaries and restrictions. We made some of the field space a little larger and had to remind our players more about spacing, but besides that, I thought it went well.”

Men’s Soccer coach Tyler Sheikh echoed the sentiments, stating that just being able to get together as a team on one field is a success in and of itself.

“We owe a massive debt to all the planners and Sports Med/Testing Center for making that happen. The pandemic is obviously serious and we all feel it with the numbers we’re seeing currently on a national and local level,” he wrote.

Sports Medicine has undertaken the massive task of not just fulfilling their duties to the numerous athletic programs this fall, but also managing the school’s entire COVID-19 testing program. A member of the sports medicine staff has been in attendance at nearly every practice on Garcelon Field, as well as other team practices across campus.

“I thought Nick Cooke and his training staff were phenomenal,” he said. “I don’t think the school could’ve gotten through this [semester] if it wasn’t for Sports Medicine.”

In discussing his own team, Coach Hall was incredibly enthusiastic about the opportunities that football had this fall, despite only being able to practice without the hope of a game this year.

“You know, it’s funny,” he said. “I think the whole point of having practice was less about Amherst, our first game of the year which is now a full calendar away, and it’s really about community. You don’t need to have a football to have a team.”

Community and team-building became the football team’s focus this fall, according to Coach Hall.

Coach Hall also said that Zoom was a game-changer for the team, as they were able to bring in numerous motivational speakers, NFL players, and even Jane Elliot. Elliot is a renowned teacher and lecturer famous for creating the “Brown Eye/Blue Eye Exercise,” which is meant to expose participants to the experience of being treated as a minority.

Overall, while Coach Vari, Coach Sheikh, and Coach Hall each acknowledged the frustrations and difficulties that came with having athletics in a pandemic, all were grateful for the opportunity to even be on campus and have the chance to get their teams together in the first place.

Coach Hall was particularly holistic when deciding if he’d do anything differently this semester knowing what he knew now.

“I don’t think I would do anything differently,” he said. “When the pandemic first hit, we were prepared to be remote. I think we did a great job of being able to make the best of the parameters…being able to get people like Jane Elliot on Zoom with our guys is something we wouldn’t have been able to do before. College is about increasing your palette of experiences, whether it be racially, religiously, creed, whatever it might be. And we were able to capitalize on the new circumstances.”

Coach Hall also noted how impressed he has been with not just the student-athletes on campus, but all of the students.

“Shoutout to all our students, you guys did a heck of a job,” he said. “I don’t know if I would’ve been able to do that when I was in college. From our perspective, what you guys are handling, our future is secure because you guys are showing us that you all have got it. You guys have the power.”

While the pandemic is not going anywhere, and sports will not return in full for the time being, there are plenty of silver linings to take from the success of athletics this fall.

There was tremendous doubt from many in the student body, administration, and community as to whether or not Bates would even be able to hold classes in-person, never mind be able to hold athletic practices in a responsible and safe manner. But despite the circumstances, Bates students once again proved that even despite the odds against them, they are able to be successful and make the most of the semester from an academic, athletic, and social standpoint.