Democrats Contribute just as much to Polarization as Republicans 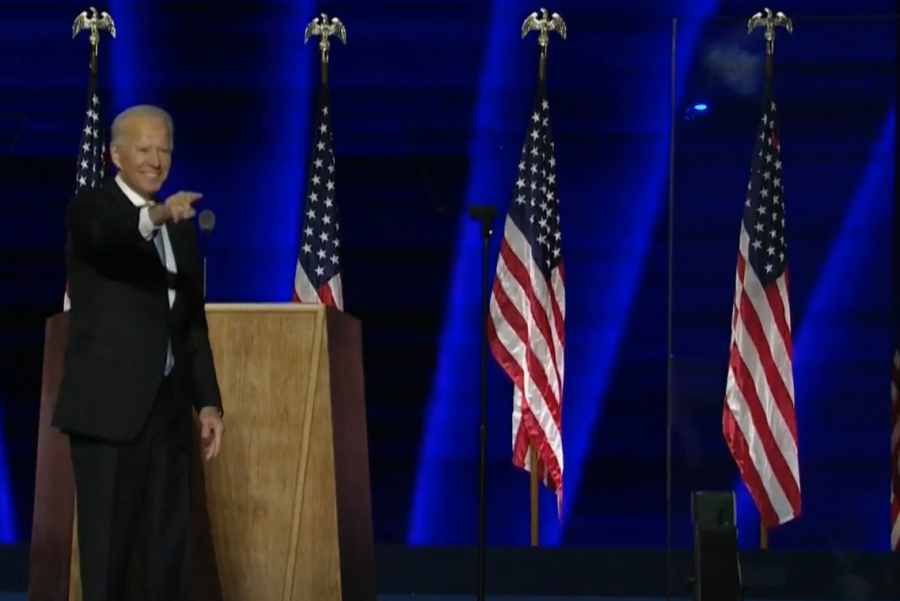 Joe Biden after his victory speech on Oct. 7 in Wilmington, Del.

I, like many, am ecstatic about the election of Joe Biden. Also, like many, I am ready to support a push for progressive policies in the White House. All the while, if you think that “holding Biden accountable” will help push through healthcare reform, immigration reform, prison reform, or green legislation in the Republican majority Senate, then you have another thing coming.

When we consider how we form, exercise, and execute our opinions in a democracy, let us not forget this quote from Vaclav Havel: “Keep the company of those who seek the truth; run from those who have found it.”

If we see half the picture, our response will carry half the magnitude. Be wary when buying into a harmful moral absolutism that likely reflects more about your background than about a well-founded belief. As we construct our opinions, we should understand that they are constructions, and that they come from the fruit of the tree we subsist off of.

These things are seemingly obvious to the naked eye. Yet, I observe young people post and take stands that are not rooted in anything more than experiential idealism. Conflicting suppositions are not right or wrong, but rather, they share one truth between them. In that sense young people are receiving a half-baked education. Instead, we should be choosing consensus over conflict.

A recent study by the Cato Institute, a libertarian think tank, found that “strong liberals” were the only political category that didn’t worry about causing offense with their political views. Now, I can understand this. In supporting President Donald Trump, you do support inhumane policies that fail to recognize basic human rights. With that said, if those in the “center” to “center right” don’t feel that they can express their views, then “strong liberals,” risk ostracizing our allies. Contrary to our two party system, legislating will require forming a coalition of sorts around Biden. Beginning the next four years by purporting that we need to push far-left policies will leave us with nothing to show for. And just like that, Democrats will have thrown away their only mandate from this election cycle.

In a time of “healing,” according to Biden, we must remember what brings us together. Otherwise, Trump will not go away. “Trumpism” will continue to be a central tenet of Mitch McConnell’s (R-KY) Senate and it will cause the country to continue on a path of ideological extremism that only blunts democratic institutions. This election has been an exception to that, and Democrats must capitalize on it.

Samantha Power, ambassador to the United Nations under Obama, once said that “History is laden with belligerent leaders using humanitarian rhetoric to mask geopolitical aims. History also shows how often ill-informed moralism has led to foreign entanglements that do more harm than good.” I think that Ambassador Power is spot on, and her message can be seen at home too. Moralism and liberalism have collided into a mirage of good people unwilling to listen. Listening will forever be the most impactful domestic and foreign policy tool. People have never had time for it because they are engrossed in a false liberalism that demands one path. Foreign policy will never follow such a trend as humans don’t follow such a trend.

Thus, when we unadd conservative voices on social media platforms or simply choose not to listen, we risk making their echo chambers stronger and our argument unimpactful. For, of course, you can choose to deny the existence of half the country, but they will still exist. This election has been a testament to that truth. We must start looking at the U.S, as Biden said on Saturday night, “not as blue states or red states, but the United States.” If you care about democracy, you will take the time to listen to the other side.

I know this is hard, for some on the right are ardently racist, but Biden also spoke about “inflection points” on Saturday night; moments in history where the general makeup of U.S politics shifts drastically. If we want now to be that time, then we, on the left, must be willing to cultivate that change. The change that will allow for both sides to see the last four years for what they were, and heal. At this time I’m reminded of Tolstoy, who once said: “Everyone thinks of changing the world, but nobody thinks of changing themself.”

As Joe Biden accepted the presidency on Nov. 7 in Delaware, he was the first to herald that change. Jogging to the microphone after 48 years of waiting for this moment, he did not push policy or ideology. Instead, Joe looked to Ecclesiastes 3:1-8, where it says: “There is time for everything…and now is a time to heal.”