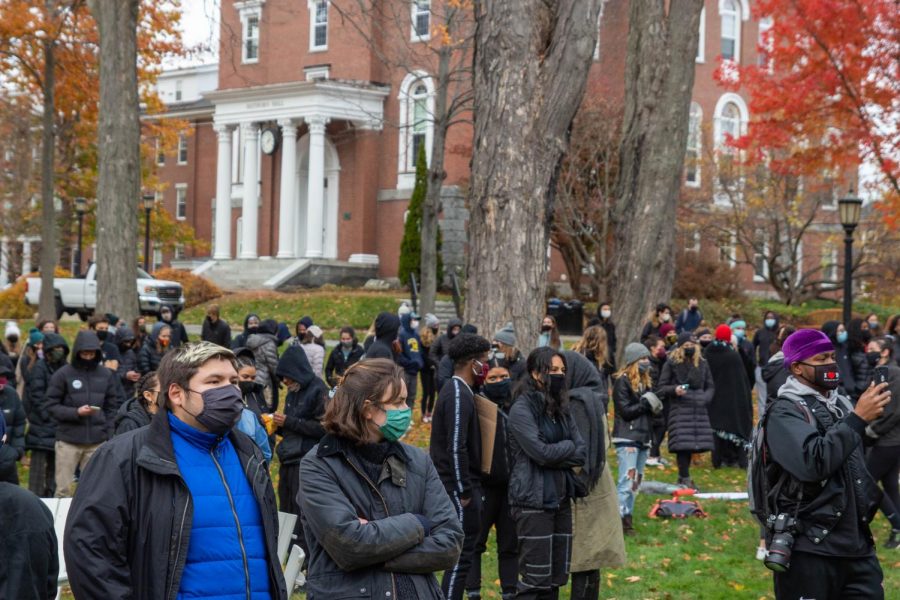 Organizers demanded that Bates should require all students to take a race theory course, among other demands.

Last Friday, students gathered around the steps of Coram Library in protest of a Bates College Instagram post published on Oct. 27. The post featured the President of Bates College Republicans along with a short profile, including quotes on their conservative political views. This was part of a bipartisan series highlighting students voting in their first presidential election.

Many students commented on the post, expressing their disagreement and disappointment with Bates for publishing it. After several hundred comments had been written, Bates disabled comments, blocking further comments and hiding previous ones from view.

A few hours later, Bates posted a statement from President Clayton Spencer on Instagram defending the college’s actions, writing the project aimed to reflect “a range of personal motivations and political viewpoints.” Comments were also disabled on this post.

Numerous students condemned these actions, decrying Bates for limiting discussion and concealing students’ criticism. Bates then re-enabled the comments the following day, which allowed for new comments to be posted and for old comments to be visible.

In response to these actions, the Bates College Student Government (BCSG) organized a socially distanced protest. BCSG co-presidents, Perla Figuereo ‘21 and Lebanos Mengistu ‘21, were seen giving hand warmers to the many protestors who had come and braved the cold weather. Members of the Bates community were also able to participate in the protest virtually through Zoom and broadcasted via Instagram live video.

Hundreds of students attended the protest in person, along with some members of the staff and faculty. The protest lasted nearly two hours
‘Bates Will Not Silence Us’

After an introduction by Figuereo and Mengistu, Student Government Representative, Rishi Madnani ‘23, was the first to speak. “Free speech does not mean you can protect hate speech,” Madnani said, referencing President Spencer’s response posted on Instagram. Madnani further explained that just because a person can lawfully say what they choose does not mean others cannot criticize.

A white sheet lay on the steps of Corum painted with the phrase “Bates Will Not Silence Us”—a theme carried throughout the protest. Students stepped up to add their handprint during the protest.

Sam Jean-Francois ‘23 spoke about the reasons behind the protest and how the protest is larger than the student featured in the Instagram post.

“This protest isn’t fascism, or hypocrisy, or any other term being used to stray away from the focus of the protest,” Jean-Francois said. “This is a response to the silencing of current, past, and potentially future BIPOC, queer, and international students.”

Jean-Francois also expressed the difficulty in putting feelings into words, especially when “tired, angry, annoyed, and frustrated” no longer feel right. “None of these words can express how I feel as I prepare for another Zoom call. As I prepare to explain myself again. As I prepare to speak against silence,” Jean-Francois shared.

President Spencer was present at the protest to apologize, answer questions, and listen to concerns expressed by students. She apologized for the added harm, fear, and feelings of unsafety inflicted on the Bates community.

“It was incredibly insensitive of me to speak out about the election without taking that into account,” Spencer said.
Criticism of Bates and Protest Demands
After many students, and one faculty member — Associate Professor of Digital and Computational Studies, Professor Carrie Diaz Eaton — spoke on the messages of the protest, Figuereo and Mengistu stood on the Coram steps to explain that they were not just here to “yell,” but they were here with demands. These demands included:

Spencer was also asked to hold open office hours for students to express their beliefs and concerns. Spencer has regular open office hours which students may sign up for, although this was not initially clear to many students in attendance. Spencer said she welcomes students to come talk with her, and if needed, she will set aside more time to meet.

Additionally, Madnani and Alya Yousuf ‘21 pointed to the discrepancies in Bates’ mission statement and Bates’ treatment of BIPOC students.

Yousuf further elaborated that while Bates prides itself on being “one of the first U.S. institutions of higher learning to admit women and people of color,” the school still needs to be held accountable to its mission statement. “To claim to be a school founded by abolitionists means that we are a school that has historically fought against racism and oppression,” she said.

Yousuf and other members of BCSG feel that Bates is leveraging the claim “founded by abolitionists” in order to attract students to Bates and increase the diversity of their student body.

“People hear about our abolitionist past, and our past anti-racist history,” she said. “Many people choose Bates because of its history and mission statement.

She asked that Bates “Stop capitalizing on this abolitionist story” unless it is willing to commit to anti-racism reform.
Student Profile Sparks Protest
On Oct. 23, the Bates Communications Office posted a slideshow online featuring eleven students who were voting in their first presidential election. They planned to post a profile of one student a day leading up to the election on the Bates College Instagram, beginning Oct. 25.

The post profiling the president of Bates College Republicans was only the third of the profiles to be posted, and at that point, it was the only post that referenced a student organization affiliated with a political party.

All but one of the eleven students featured in the series belonged to either neutral or left-leaning student organizations, including Bates Votes, High Altitude Ballooning Club, and the Environmental Coalition.

Some of these students whose profiles never made it to Instagram included Figuereo and Mengistu from BCSG, Anni Gundeck ‘21 from the Reproductive Justice Alliance, and Miles Nabritt ‘21 from Bates Votes and Model United Nations.

This post was released only a day after the Supreme Court Judge Amy Coney Barrett was confirmed, cementing a 6-3 conservative majority and upsetting students. This may have contributed to the fierce condemnation of the Instagram post.

Several hundred students commented on the Instagram post. Some commenters expressed their disappointment and criticism of the post, others attacked the featured student and mocked Bates’ decision.

In Spencer’s statement posted later that day, she explained that the series was focused on providing a “non-partisan window” on civic engagement and was meant to include a wide range of political perspectives. In reference to the right of free speech, she said “Any attempt to filter out certain voices is unacceptable, particularly in a campus community that should prize free and open discourse,” President Spencer wrote.

Many students disapproved of this statement and commented on the hypocrisy of invoking the right to free speech after Bates had disabled comments on both Instagram posts. Bates enabled comments the following evening on both posts after removing comments from the student profile which violated their comment policy.

The entire series of posts about voting and the initial statement from Spencer were deleted following the protest.
Demand for Critical Race Theory Course Requirement
Dean Hill spoke to the demand that all students be required to take a course in critical race theory in order to graduate: “The Dean of Faculty doesn’t have that kind of authority…the faculty control the curriculum.” However, Dean Hill assured students that the idea would be brought up in the next Academic Affairs Committee meeting.

On Wednesday, the Academic Affairs Committee sent out an email inviting all students to a Zoom meeting to discuss “to better understand the objectives, goals, and challenges of a curricular requirement of this sort.”

This meeting will be held on Nov. 12th from 6:30-7:30 pm. The committee stated that additional meetings will be planned as needed in order to enable full participation. “Once feedback has been collected, we can discuss potential pathways with the broader community,” they wrote in their email.
Students Demand “The Time is Now”
Speakers at the protest emphasized the amount of work that is still needed to make Bates a place where BIPOC voices are actively supported and listened to.

“Clap if you have done everything in your power to make sure Black bodies feel comfortable,” Adama Diaby ‘22 asked of those assembled. “Clap if you make sure not to enable the white supremacist ideals here at Bates.” She then pointed out how few students, and how few white students in particular, were clapping.

Ali Manning ’23 made it very clear that the work of anti-racism should not fall on BIPOC students alone; white students need to show up, too and they need to hold each other accountable. Addressing the white students in the crowd, she said: “What are you going to do after today? We need to do better – this is our work too!”

In highlighting the urgency of this moment, Redd added: “I am not saying [this] to attack you. I am saying it to wake you up.”

Sam Mironko ‘21 believes that we all have individual agency. “Nothing’s going to change until you work to implement change within yourself and within your greater community,” he emphasized.

Similarly, Dean Hill said he believes that “the anti-racist work that is in front of us is the most important kind of work that we can do.”

A full recording of the protest can be found on the Bates Student Government Instagram page.