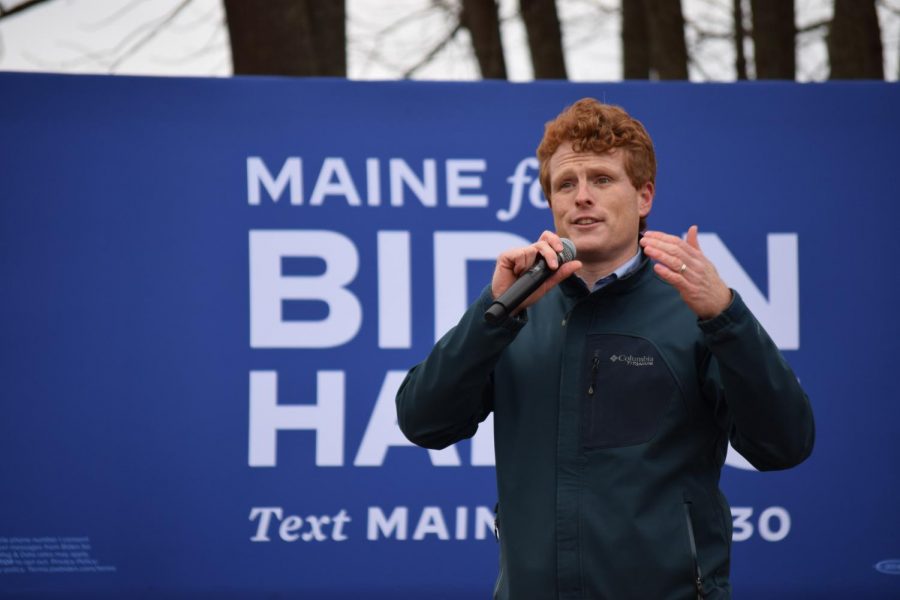 With less than a week prior to the 2020 general election, Congressman Joe Kennedy III held a small, socially-distant ‘Get Out The Vote’ event at Simard-Payne Memorial Park in Lewiston on Friday. Kennedy’s appearance in Lewiston was one of the final efforts to rally the second district Maine voters to support the Biden/Harris presidential campaign and to encourage voters to stay politically engaged in the final days.

The event was organized by Lewiston Democratic Party Chair Kiernan Majerus-Collins ‘18. Kennedy was presented with a framed photograph of his grandfather, Robert F. Kennedy, who attended Bates in the 1944-45 academic year for the V-12 program.

Kennedy was introduced by Lewiston Councilwoman Safiya Khalid who conveyed her support for the Biden/Harris campaign. She also spoke about her own motivation to enter politics a mere four years ago due to Donald Trump’s “cynical attempt to divide us” by making the United States “meaner, weaker, poorer and sicker”.

With Khalid’s words in mind, Kennedy began his speech by expressing his support for the Biden/Harris campaign and, if elected, what their leadership will do for the U.S.

“We know who Joe Biden is, we know what type of leadership he will demonstrate in the Oval Office, we know what he and [Senator Kamala Harris] together can do to help restore decency and dignity to our country,” he said.

The recent onset of candidates and speakers from both parties visiting Maine comes as no surprise as Maine will be critical to the final electoral college tally. “Maine has such an important role to play at every level, in the house, in the senate, in the presidency,” Kennedy stated.

As a result, he stressed the significance of voting and staying involved in these final days because “on Tuesday night, the eyes of the nation are going to be here, and I’m here to ask you to do everything you can to restore our faith.”

In an interview with The Bates Student, Kennedy emphasized the importance of college students and young people getting involved in politics as “over the course of history in the United States, it is youth that drives our country forward…and challenges us to do better and confront those in charge when the structures are falling short.”