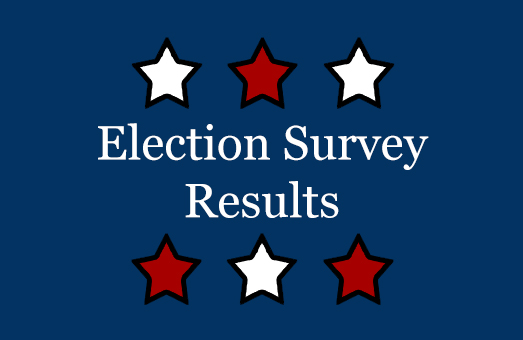 The Bates Student conducted a survey of current Bates students, staff, and faculty to investigate political views, affiliations, voting trends and other factors related to the 2020 election. The survey was distributed via Instagram and through class Facebook groups last Sunday, Oct. 25. An email was sent to every student, staff and faculty on Monday morning. The survey was closed at 10 p.m. Monday.

Generally, female-identifying Batesies responded to the survey more than male-identifying community members (56% vs. 42%). Three respondents identified as nonbinary and nine people did not wish to disclose their gender identity.

The Bates community overwhelmingly reported plans to vote for former Vice President Joe Biden (Democrat). Ninety-four percent of students report that he is their presidential pick, while 5% of students are voting for President Donald Trump. Staff members are the most likely to vote for Trump (7%). Faculty were the most likely to list a third-party candidate; 7% of faculty will rank Howie Hawkins (Green) as their first choice (Maine has ranked-choice voting).
Not a single registered Democrat respondent said they would vote for Trump. In comparison, 37% of registered Republican respondents will vote for Biden. 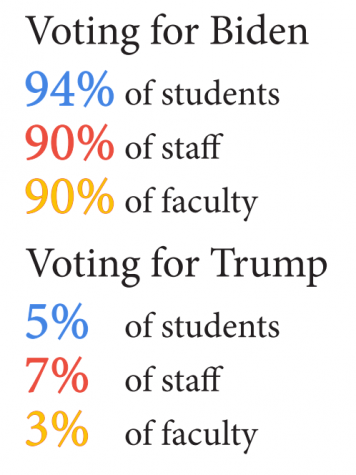 Knowing this, it makes sense that the Bates community largely views Biden more favorably than Trump. Respondents tended to dislike Trump more strongly than they liked Biden. Eighty-five percent of respondents said they strongly disagree with the statement “I have a positive view of  Donald Trump.” Only 6% of respondents said they either agree (2%) or strongly agree (4%) with this statement. Very few people reported that they were neutral on the statement (1%). However, we believe the approval for Trump is inflated in this survey; four students reported they “strongly agree” with the statement, yet noted they would be voting for Biden. We believe these students did not choose the response in this question which accurately represented their view.

On the other hand, the Bates community tends to view Biden more positively on average. Thirteen percent of respondents said they strongly agree with the statement “I have a positive impression of Joe Biden,” and the majority of the Bates community agrees with the statement (52%). Respondents reported a neutral reaction to the statement at a much higher rate (20%); additionally, 15% of respondents either disagreed or strongly disagreed with the statement, yet just 6% are voting for Trump and 2% for a third-party candidate. This indicates that some people are voting for Biden because they dislike Trump more than they dislike Biden. “#SettleforBiden,” one student wrote.

Almost 90% of respondents report they have either voted early or by absentee/mail-in ballots. Less than 1% of students reported they will not vote in this election, however, that rate is likely to be higher as this survey primarily attracted responses from politically-minded members of the Bates community.

Most of the Bates community will be voting in Maine (79%). Twenty-one percent of students are voting in their home state; some come from critical swing states such as Pennsylvania, Ohio, New Hampshire, Colorado, Florida and Wisconsin.
Climate change was ranked as the No. 1 key issue among students (31%). Racial justice (18%) and COVID-19 (15%) were ranked second and third. Staff listed health care as their greatest concern (21%) and faculty ranked racial justice (17%) only slightly above COVID-19 (16%) and climate change (14%).

Eighty-five percent of the Bates community surveyed is voting for Sara Gideon (Democrat) to replace incumbent Susan Collins (Republican). Staff and faculty report that they will vote for Collins at a higher rate than students (12% & 11% vs. 6%). Faculty were the most likely to vote for an independent candidate, Lisa Savage, as their first choice (16%), whereas staff members primarily chose either Gideon (85%) or Collins (12%). Students voted for Lisa Savage at the same rate as Collins (6%).

More than 90% of the Bates community supports Jared Golden’s ’11 (Democrat) reelection campaign for the U.S. House of Representatives. As a member of Bates’ Class of 2011, this is hardly surprising. Almost all the faculty respondents reported that they are voting for Golden (97%); students and staff were also largely supportive, with 93% and 89% voting for him respectively. His challenger, Dale Crafts (Republican), garnered the most support among staff (9%), but significantly less among students (4%) and staff (3%).

“I am extremely worried about the outcome of this election and the implications it holds for the rights of so many people in the U.S., but also the future of humanity on the whole, specifically with regard to the environment,” one student wrote. “These next four years could help or severely harm the future of the United States on many fronts.”

“The current administration has divided our country so badly I fear the outcome of the election,” one staff member wrote. “It has politicized a deadly pandemic and ignored the educated advice of health experts to the point of putting this country, its people, and its democracy, in peril. It is indifferent to the pain and suffering of its’ people and is racist and sexist. It has rolled back laws intended to mitigate environmental dangers for profit. It threatens the existing affordable healthcare plan with no stated replacement plan of its own. This election is tearing apart this country.”

“I have major criticism with the idea that “very liberal” is the most leftist position on your scale when many Bates students identify as leftists, and the policy issues they care about are meaningless to liberal politicians/capitalists in general,” one student wrote.

Comments from students, staff, and faculty speak to the divisive nature of this election.

“Donald Trump is a white supremacist. If you vote for him, you’re saying that racism, sexism, xenophobia, homophobia, etc. are not important enough issues to swing your vote,” one student wrote. “Check your morals and make sure they align with those of your candidate.”

Members of the Bates community with conservative views feel unfairly targeted. Numerous students, staff, and faculty members reported their concerns about political culture on campus. Notably, this survey was completed before Bates posted a controversial profile of the president of College Republicans to Instagram on Tuesday, which led to a protest on Friday.

“Republicans tend to be mischaracterized and I think that Bates needs to work towards bridging gaps in the community as these students are just a much a part of Bates as liberal or left-leaning students,” one student wrote.

“I hope that Bates creates an environment where civil discourse can happen and human difference is valued,” a faculty member wrote. “I know from past elections that the conservative voice at Bates is not always welcome. I hope this can change.”