A Brief History of Voter Suppression at Bates 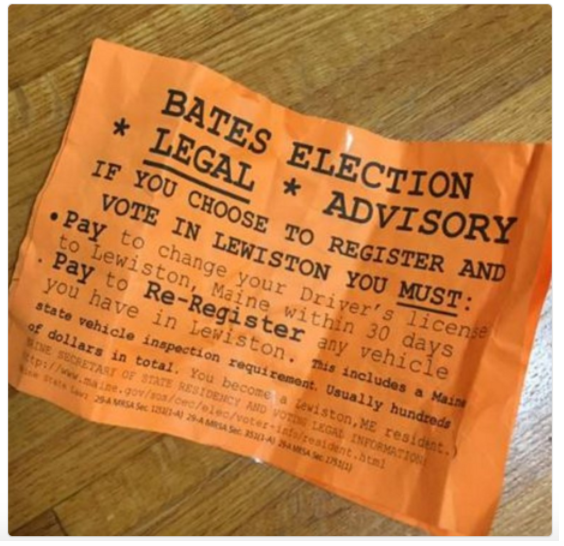 The ability of Bates students to vote in the state of Maine is a constitutional right, yet still a contentious issue when it comes to putting that right into practice.

Despite the clear and relatively simple requirements regarding voter eligibility in Maine, Bates students in the past have encountered numerous attempts at voter intimidation and suppression. This begins a slippery slope toward disenfranchisement as students have the right to vote in either Lewiston or their alternative residence. These attempts to suppress Bates students from voting are both legitimate and documented.

In November of 2016, a bright orange leaflet entitled “BATES ELECTION LEGAL ADVISORY” was disseminated around campus informing students who wished to vote in Lewiston they must:

Change their driver’s license to a Maine license.
Re-register their vehicle to Maine (along with a note stating that this often costs hundreds of dollars).

While these statements are not incorrect, they are not relevant when addressing voting in the state of Maine. Voters are not required to own a car by law, nor are they required to have a driver’s license to vote. In response to these leaflets, both federal and state officials, along with the Maine ACLU, published press releases regarding attempted voter suppression and disenfranchisement. U.S. Attorney for Maine Thomas E. Delahanty II commented in the release that “every citizen must be able to vote without interference or discrimination and to have that vote counted without it being stolen because of fraud. The Department of Justice will act promptly and aggressively to protect the integrity of the election process.”

Bates President Clayton Spencer echoed the sentiment, telling the Sun Journal that many Bates students are eligible to vote in Lewiston, and that the leaflets represented a “deliberate” attempt to suppress voting among Bates students.

More recently, in 2018, former Lewiston Mayor Shane Bouchard sent a letter to 221 people, many of which included Bates students, and community members who had recently registered to vote in Maine. The letter explained that there were “certain duties” that were entailed with the right to vote in Maine. The letter stated that registering to vote in Maine is a declaration of residency, which then “has consequences for compliance with other Maine laws.” Bouchard touched on examples such as the necessity for new Maine residents to obtain a Maine driver’s license, clarifying that to not do so is “a crime under Maine law.”

When asked by The Bates Student as to whether or not the letter was targeted directly at Bates students, he refused to give a direct answer, instead replying with questions on how such a letter may be taken as intimidating, claiming, “how is a letter that went out to all newly registered voters across the city to be construed as aimed at students? How is an outline of what is legally required of new registrants at all intimidating?”

Many students took the former Mayor’s letter as a form of voter intimidation, and Maine Secretary of State Matthew Dunlap replied to the former mayor’s letter, stating, “[w]hile the letter’s contents are indeed factual, I must observe that the respective processes are not relational; constructing them as such leaves the right to vote as subordinate to bureaucratic checklists – which neither the constitution nor the statues template – and further it does seem to be a rather awkward way to welcome new residents into a community.”

He added in closing that, “while you cite the requirements in law accurately, what is not included is any information that ties these requirements to voting. U.S. citizens who have reached the age of majority have, in the State of Maine, an unquestionable right to vote.” These are just two recent examples, however, there have been other, smaller-scale incidents.

Regardless of how people feel about Bates students voting in Lewiston, the reality is that voting here is legal, and to deny anyone the right to vote within the state of Maine or anywhere for illegitimate reasons is illegal. All parties should oppose this given it is a constitutional right of US citizens to vote were eligible and registered.

There are valid arguments for and against voting in Maine, as opposed to voting where one is originally from. As affirmed, voting in Maine is legal and a right for Bates students; Bates students are subject to local laws, contribute more to the Lewiston community than that of their origin, and spend more time here in their four years than in their place of origin. On the other hand, some may feel that out-of-state students are guests in Lewiston and the State of Maine, contribute next to nothing to the local economy and community during their 36-month stay, give or take a semester.

I personally chose to vote in my home state of Massachusetts, but in no way is it illegal for Bates students to register and vote in Lewiston. Regardless of how one feels about that, it is fact. According to Maine state law, in order to vote in Maine, one must be a US citizen, over the age of 18, and maintain a voting residence within the state of Maine, which for a Bates student is the address of your dorm or off-campus residence.

On the subject of registration, Maine allows for in-person voter registration up to and on Nov. 3, meaning that students have the ability to register and vote on the same day. Early voting in Maine ends Oct. 30. Regardless of your political affiliation, The Bates Student urges every eligible Bates student to vote, whether in your home state or in Maine.