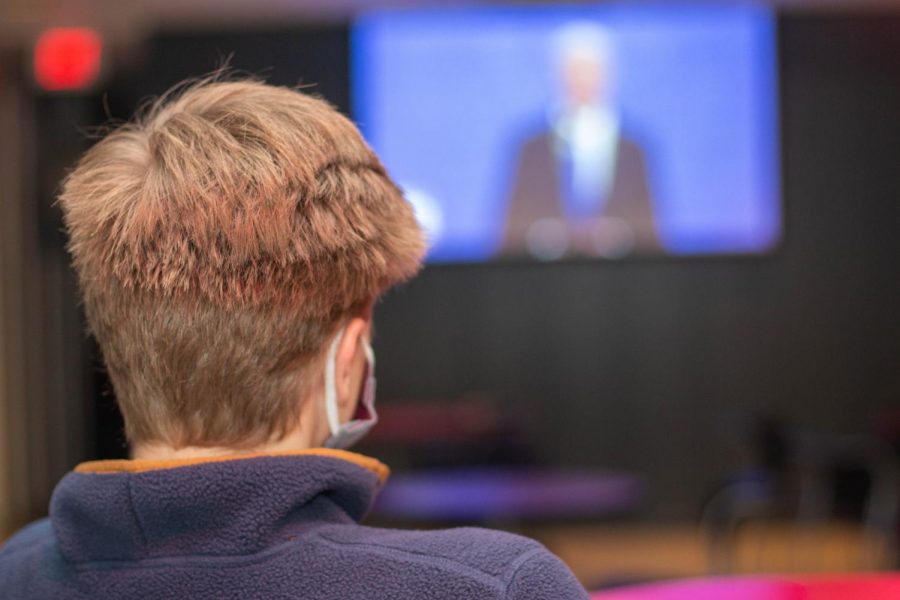 With just a few more days until the Nov. 3 election, political groups on campus have intensified their voices.

In addition to non-partisan voting efforts like Bates Votes, there are a number of different political groups that support different candidates and parties. Along with the Bates Republicans and Bates Democrats, there is an official Bates for Biden group.

Bates for Biden, which was formed last spring by sophomores Barratt Dewey and Daphne Valen, has been working around the clock to help elect former vice president Joe Biden.

Despite his enthusiasm for Biden, Dewey did not initially support his candidacy. During the primaries, he mainly worked for Maine Senate candidate Sara Gideon.

“I was a big supporter of [Senator] Cory Booker,” he said. “Once the Democratic nominee field dwindled down to a few candidates, I started supporting Biden.”

Dewey has admired Biden since he was tapped to be President Barack Obama’s 2008 running mate.

“I’ve always thought he’s a truly decent, compassionate, and intelligent person and politician,” he said. “I truly believe he is the right person to lead us out of the Trump presidency and into the future.”

The group has been organizing a wide range of different volunteer opportunities for students including phone and text banking, outdoor debate watch parties, and weekly Zoom meetings.

Valen often takes the lead in meetings, reminding volunteers about the importance of the election and delivering messages straight from Biden’s headquarters. Recently, she and Dewey were featured on the Maine Democratic Party’s Instagram and have worked closely with Biden groups from other colleges.

Dewey and Valen have also organized events alongside the Bates Republicans and Democrats, including a Q&A with politics Professor of Politics John Baughman and Stephen Engel on the importance of young people in politics.

“We had a lot of people with different ideologies coming together to discuss current events and learn more about our political system, which was great to see,” Dewey told The Student.

Quinn Troy ’22, president of Bates Republicans, hopes to continue hosting events in tandem with other political groups on campus.

“In the immediate future, the Republicans are looking to host election programming in conjunction with the Democrats and to host an election watch party,” he said.

Troy added that he hopes to host an in-person speaker event next semester if coronavirus regulations are loosened.

Though he always felt like a “conservative at heart,” Troy didn’t start identifying as a Republican until the 2016 election after seeing then-candidate Donald Trump speak at the UIC Pavilion in Chicago.

“At the time, I wasn’t even the biggest Trump guy,” he said. “I was just there for the spectacle.”

When Troy arrived, however, he was shocked to see the number of protesters.

“There were about 3,000 protestors there yelling all sorts of obscenities at Trump supporters who were literally just standing in line for an event,” he remarked. “I distinctly remember one guy holding a sign that said, ‘Support Trump, get jumped.’ Even though I wasn’t the biggest Trump fan, seeing the hatefulness of those people really pushed me to becoming a partisan Republican.”

Because of what he describes as an “overwhelmingly left-leaning” student body, Troy believes that the College Republicans are a necessary club on campus.

“The overwhelming majority of Bates students, professors, faculty, and staff are of the political left,” he said. “As a result, any form of dissention from this brand of politics is socially hazardous and leads to self-censorship. This club provides an environment where you can safely challenge the narrative without baselessly being labeled as hateful.”

“Endorsements are typically misread as an approval of everything a candidate has ever done and avoiding political endorsements is a good way to avoid defending bad policies [and] character traits,” he said, adding that not everyone in the club supports the same candidate.

For both club leaders, political participation is key in their messaging.

“I think many Bates students live in a bubble,” Troy said. “The policies that someone endorses their junior year of college will have a direct impact on their way of life after graduation.”

For his part, Dewey stressed the influence that college-age voters can have, especially in Maine, which is currently a swing state with a tight Senate race.

“The people we elect to office are the ones who will influence our future the most, so it is up to us to decide what kind of future we want,” he said. “At a time with crises ranging from the pandemic to climate change to the widening wealth gap, it is imperative that we do everything in our power to elect someone who will address the issues that will define the rest of our lives.”

Dewey concluded that although seemingly dramatic, “young people being apolitical is not an option because this election is not about politics — it’s about ensuring a future for [our generation].”

You can find more resources about voting on the non-partisan Instagram @BatesVotes. You can also check out @BatesforBiden, @BatesCollegeRepublicans, and @Bates_Dems for more specific information about each group.