Dan Mills Takes you on a World Trip 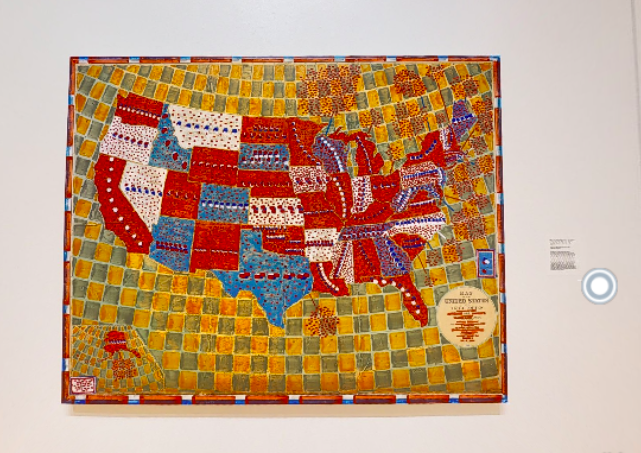 Dan Mills is currently the Director of the Bates College Museum of Art and a lecturer in the humanities. However, he is also a renowned artist and has had his work displayed in professional exhibitions at locations such as the Herron School of Art and Design in Indianapolis. His newest collection runs there virtually until Oct. 17.

Mills’ pieces focus heavily on cartography and other systems that visually display information, history, and current events. According to his bio on the Bates website, he began to “incorporate collage, and with it maps, into his work in the early 1990s.” Mills cites the Swedish artist Öyvind Fahlström as an inspiration in his production of maps. Another creative influence is Agnes Denes, a concept-based artist who emerged in the 1960s and 1970s, whose art, as Mills puts it,   has “the intention of finding solutions to humanities problems.” Finally, he draws inspiration from mixed media artist Gail Skudera, who happens to be his wife.  She combines painting and photography as well as weaving and textiles into her work. Mills also works in painting but uses collage more. 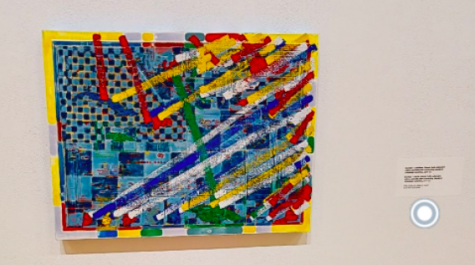 Mill’s current collection, “Human Topographies,” is a brilliant combination of all these techniques. The work features a collection of maps of multiple countries and continents such as the US, Africa, and Antarctica, alongside visualizations of other regions of the world. Now one may think: is that it? Is his collection only made up of maps? Yes and no. Though the central focus of his collection is recreating maps, what makes these maps special is what he has written on them.

Six pieces are titled “What’s in a Name?” followed by the region each focuses on. These canvases represent either a full map of the U.S. or maps specifically of the west or the midwest. Written on these maps are the native names for these regions. Names that have all been forgotten or disregarded by the U.S. government. The largest two pieces of the series are of the whole U.S. They are brightly colored collaged maps laid down on an acrylic board. One map has non-native names redacted and native names from each state printed in the margins.

The other map, showcases a number of major geographic features that are named after indigenous people and words marked with red. Inspiration for these pieces is derived from Mills counting indigenous words on a map of the U.S. from the 1890s, which was the year that the federal government declared the frontier to be “closed.” This delineation meant that there was no longer an imaginary line separating the Indigenous people from the “civilized” white citizens. The government decided Indigenous people didn’t deserve to live in the country. 1890 was also the year that the U.S. army massacred more than 200 Lakota men, women, and children at Wounded Knee. On this map, the indigenous names lie buried under red, white, and blue colors. These pieces are a way to show the history behind the U.S. and how it has been erased.

Another series is titled “Contest” that features maps of certain regions of the world. Regions include South Africa, the Middle East, the Carribean Islands, the Pacific Islands, and the continent of Africa. What do all these regions have in common? They were all colonized. Each piece in this series has colors associated with the countries that colonized the region and some even have lines linking them to these countries. 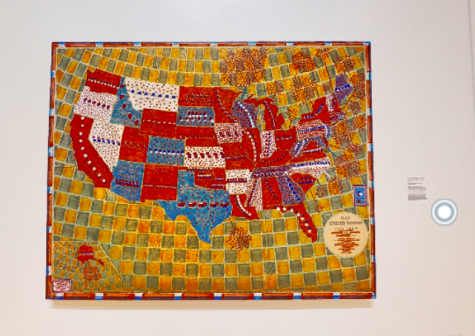 One of the largest pieces in the gallery is titled “Life, Liberty, and the Pursuit of Happiness (+ Incarceration and Murder) State Ranking.” In this piece, Mills attempts to find a correlation and causation by examining “data around freedom, environment and gun regulations, quality of life, health, incarceration and violence.” What does this mean for the people in these states? Well, that’s what Mills wants viewers to reflect on.

This is the last week to see Mills’exhibition. While a virtual look may not compare to seeing the work in real life, one of the best things about the experience is that you can zoom in on the maps and look at them in closer detail. The virtual experience does not deduct from the powerful saliency of Mills’ piece, either. There are hidden messages in the places we live, and if we search for them we will find a lost history or even histories that have yet to be written.

Mills’ next solo show is next year in Boston taking place at the Howard Yezerski Gallery.