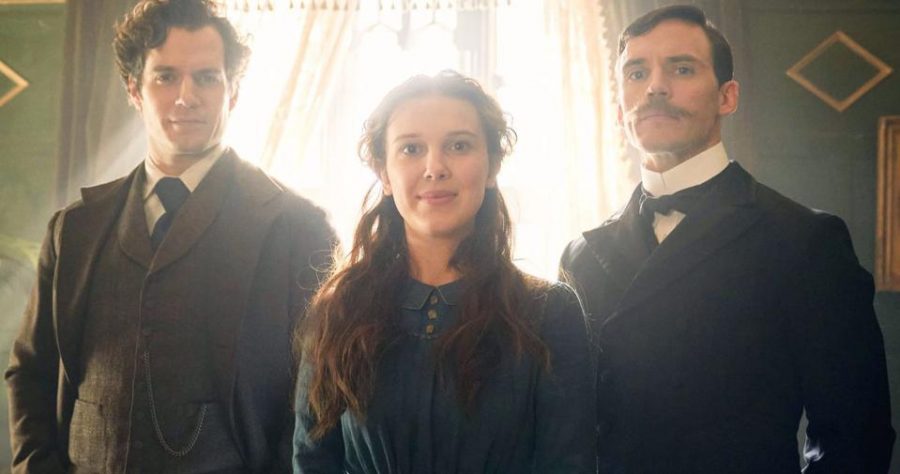 On Enola’s 16th birthday, she wakes up to find her mother Eudoria (Helena Bonham Carter) has vanished. Sherlock and their elder brother Mycroft (Sam Claflin) return home for the first time in years, deduce Eudoria has no plans to return any time soon, and make plans to send Enola to finishing school.

The night before she is due to leave, Enola realizes her mother’s birthday gift left her clues, and she discovers a wad of money hidden in her mother’s room. Disguised as a boy, Enola escapes on a quest to find her mother, and along the way helps the young Marquess Tewkesbury (Louis Partridge) claim his seat in parliament, despite those attempting to stop him.

Despite its PG-13 rating (earned for its action sequences), “Enola Holmes” is clearly meant to be a family film. I found it quite enjoyable and refreshing. It’s a Victorian-era film featuring female characters with agency, an impressive array of diverse characters, and an actual 16-year-old playing a 16-year-old. Brown’s Enola is not once sexualized, which, while admittedly difficult to do in a period film respecting the clothing of the time, is still important to praise (especially in wake of “Cuties”). While I do expect a romance to eventually spark between Enola and Tewkesbury should a sequel be greenlit, it’s not important to the narrative yet, and Brown and Partridge are only a year apart in age, subverting the popular Hollywood trope of much older men playing opposite younger women. Double win.

Brown absolutely shines in the film and holds her own brilliantly with Cavill and Claflin. She and Tewkesbury have a great friendship and even if it doesn’t go the romantic route — unlikely, considering Tewkesbury literally cries when they say their goodbyes, but technically possible — I’ll continue to applaud it.

The one fault I can find with Enola is that she has an “I’m better than other girls” attitude towards women who aren’t as liberated as her, which is an annoyingly sexist trope for a fairly feminist film: besides the remarkable amounts of agency given to the women and the lack of romance and sexualization, Eudoria works with a society aimed at elevating the rights of women, Enola grew up reading early feminist writers like Mary Wolstonecraft, and there are scenes set at an all-female dojo hidden above a tea shop.

I think one of my favorite things about this movie, aside from Enola, is how it portrays the brothers Holmes. Claflin’s Mycroft is maybe the flattest character in the film. I love this because one expects Mycroft to be the voice of reason, but instead he’s one of the main antagonists solely by being the voice of the times. He wants Enola to go to finishing school because that’s what girls do; they don’t play tennis in the house or learn to fight or do any of the things Eudoria brought up her daughter doing. For a character who is traditionally presented as literally being the British government, this much flatter portrayal allows a new angle on the Holmes brother dynamic, and for Claflin to draw on more comedic chops than his “Hunger Games” or “Love, Rosie” roles required.

As for Cavill’s Sherlock, it’s unlike anything I’ve seen from Sherlock Holmes, and I loved it. Like many members of our generation, I am most familiar with Benedict Cumberbatch’s portrayal of the famous detective from the 2010-2017 BBC series, where Sherlock is a self-described “high-functioning sociopath.” His care for Watson is obvious, if clearly stilted due to Sherlock’s attachment to logic, but he’s blunt, cold, and acts superior in every space he walks into.

This Sherlock is quite the opposite. While capable of making brilliant deductions, he is not ruled by logic. He cares for Enola much more than Mycroft does, even resolving by the end to become her legal guardian, as he finds that he understands her better than their brother. While the scenes between the brothers, as well as Sherlock and Enola, demonstrate these themes, it is the scene between Sherlock and Lestrade that ranks as my favorite.

Set at Scotland Yard, Sherlock recounts for Lestrade how he deduced the plans of Tewkesbury’s grandmother. Lestrade asks all the right questions as to how Sherlock came to this conclusion, and just as Sherlock is leaving, he asks the armor-piercing question: “How did your sister get here before you?”

Sherlock turns, blinks, says, “I’m sorry?” and then the scene cuts to him leaving Scotland Yard, a smile on his face, and a laugh escapes. It’s the first scene where he doesn’t view Enola as either the toddler he left behind years ago or a 16-year-old girl in need of protection, but a brilliant woman who could run circles around him one day — a day he appears to look forward to.

The closest Cumberbatch’s Sherlock gets to caring for people is referring to them as “pressure points,” alongside other opponents like drugs and his main adversary Moriarty. While Enola would likely make such a list, Cavill’s Sherlock can at least admit he cares for her mostly unprompted. Wanting to take her on as a ward shows that he also doesn’t view a known association with her as a weakness.

Interestingly enough, it’s this very point that has put “Enola Holmes” at the center of a copyright lawsuit filed by the Arthur Conan Doyle estate. Most of the original Holmes stories are in the public domain. The final batch, however, written after World War I and several personal deaths in Conan Doyle’s family, are not. The estate claims that it is in these final stories that Sherlock grew to become a more complex, human character, reflecting Conan Doyle’s personal life. Thus, by featuring a Sherlock with emotions, Netflix, the film’s production company, Springer, and the publisher Penguin Random House all owe damages to the estate. There’s no word yet on if the suit will go to court, but it really shouldn’t. Honestly, it just feels like a desperate cash grab by the estate.

If you want a two-hour escape from finals, the stress of the upcoming election, or just a fun, feminist romp through Victorian detective stories, check out “Enola Holmes,” streaming now on Netflix.