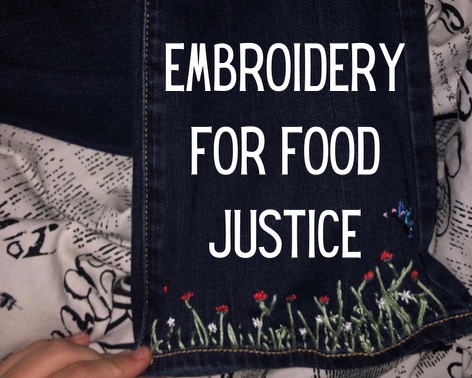 Sadie Basila ’23 offers a new way to stay fashionable: for a baseline $2 plus an extra charge for new items or donations, she will embroider any clothing item and donate the money to food justice organizations. Her fundraiser’s Instagram is filled with images of embroidered floral gardens, descriptions of the food justice groups, and screenshots of her recent donations.

Upon payment, customers are able to choose one of two food justice organizations where their donations will be sent. The first, Soul Fire Farm, is a community farm focused on ending racism and injustice in the food system. They do so by bringing communities together to learn about farming along with activism and environmental justice skills; afterwards, the food is distributed to these communities.

The other, Good Shepherd, aims to recruit volunteers to eliminate food waste and improve access to nutritious food for those in need. The food bank is focused on Maine, which adds a local element to the donation. 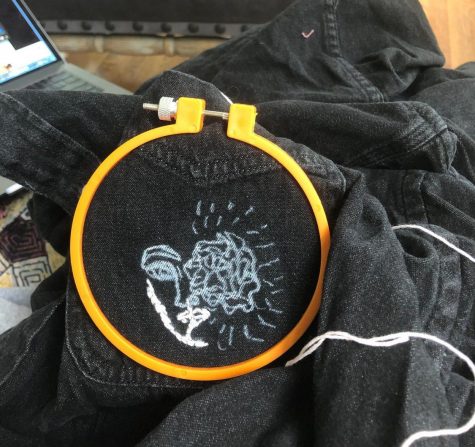 In providing this service, Basila limits clothing waste by providing a way for students to customise clothing items they already own. She has embroidered older items such as jeans, overalls, and shirts, but she can also embroider new cotton tote bags and t-shirts for an additional $5 charge. This adds an environmental perspective to the fundraiser, considering she aims to “give new life” to clothes that may have otherwise been thrown away.

The fundraiser fulfills intersecting interests for Basila. Over quarantine, she picked up embroidery as a hobby, though she has had a lifelong interest in food justice. Her grandparents run a food pantry, and she has worked at food pantries and food banks for as long as she can remember.

However, she is particularly focused on the racial inequities in access to food that further racial wealth gaps. She grew up near a ‘food desert’, an urban area “where [people] don’t have the same access to food or any fresh food or produce; these tend to be areas with more Black people.” During high school, she grew familiar with organizations such as Soul Fire Farm, which has a BIPOC-centered food justice mission.

💕🌸🌻pocket garden🌻🌸💕. Food is a basic human right, but it is not often treated as such. You shouldn’t have to do ANYTHING to avoid starvation. The social safety net in our country is entirely inadequate, and resources are not evenly allocated. The most vulnerable members of our society are the most likely to be robbed of equal access to nutrients, tying to racial discrimination and redlining that we have yet to stop, due to de facto segregation. If you want to stop these injustices, whether or not you choose to do so through my fundraiser or just by researching and donating on your own, I implore you to do so!!

A caption of one of Basila’s Instagram posts ‒ a picture of a customer wearing overalls with an embroidered floral garden ‒ encourages readers to learn about and donate to food justice efforts, whether through her fundraiser or not. The caption reads, “Food is a basic human right, but is not often treated as such. The most vulnerable members of our society are the most likely to be robbed of equal access to nutrients, tying to racial discrimination…that we have yet to stop.”

Basila’s interest in food justice has been extended through college, both through opportunities such as her community farming-focused AESOP trip and through her double majors in Politics and Economics. She feels that food justice is very much related to everything she studies, particularly because not having access to food may further racial and ethnic health divides.

Basila adds that since this is a fundraiser, she does not profit from it. Though she does not necessarily have the money for constant donations, she does have $2 thread and needles. She charges $2 to cover the cost of the thread and everything else goes directly to one of the two food justice organizations. So far, she has done eleven projects and donated $65.

“Hunger is often painted as ‘world hunger’ and a far away issue when it’s all around us. It’s not just about starving, it’s about not having access to food that promotes good health,” Basila finishes. Customers can DM her Instagram account (@upcycle4foodjustice) to inquire about embroidery projects.

Disclosure: Sadie Basila is a Copy Editor for The Bates Student