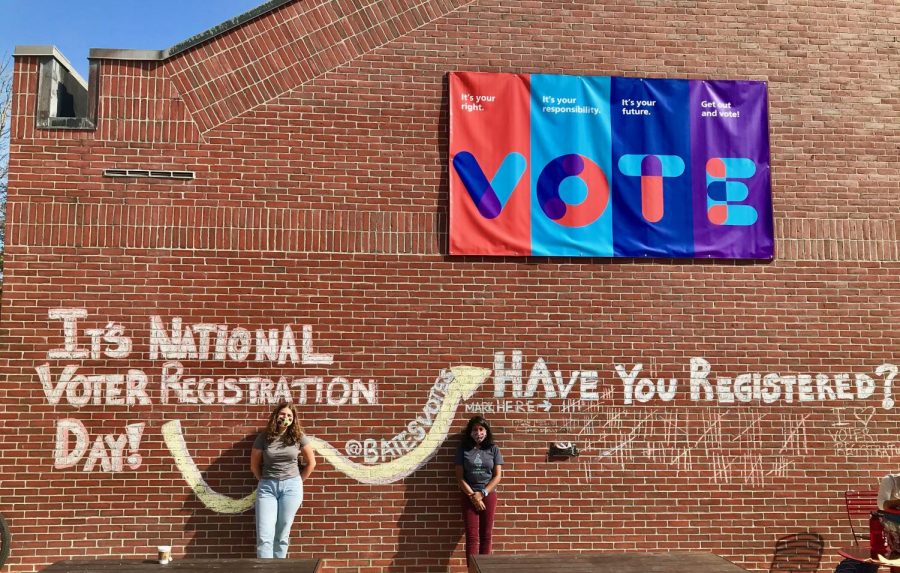 With the Nov. 3 presidential election a mere month away, multiple groups on campus are working hard to help people register and develop a voting plan.

In the 2016 election, 71% of all eligible Bates students were registered to vote, yet the number of eligible students who actually cast a ballot in the last presidential election was only 45%. These numbers were “very disappointing” for many members of the Bates community, including Peggy Rotundo. Rotundo served as an elected official for 23 years, both as a Democratic member of the Maine House of Representatives and as a representative for Lewiston in the Maine Senate. She currently works as the Director of Strategic and Policy Initiatives at the Harward Center.

Bates Votes, a non-partisan campus initiative, was started last year to address students’ confusion about how to register, where to vote, and how to cast an informed ballot; much of the work also aims to convey to Bates students why their votes matter. Bates Votes is overseen by the Harward Center but run by students.

Amalia Herren-Lage and Ashka Jhaveri, both juniors, are the student leaders of Bates Votes this year. So far, they have prioritized helping students register to vote. Part of this initiative has included enlisting and training other students to be “Bates Votes Captains,” who are then tasked with ensuring that all of their eligible teammates, residents, peers, and/or club members get registered.

Both Herren-Lage and Jhaveri emphasized their commitment to a non-partisan approach in order to build trust with students. According to Herren-Lage, her role as a coordinator is to make students aware of their right to vote, how to access that right, and that Bates Votes is there to support students.

“This year specifically, based on your identity and how it is supported and defined in the government, you may not feel comfortable voting,” Jhaveri said. Her intention to change this inspired her to work with Bates Votes.

Herren-Lage’s motivation to join Bates Votes came from a desire to work with people whose political opinions or backgrounds may not necessarily align with her own, but who agree that voting should be made as accessible and inexpensive as possible for Bates students.

“This year, we’re really working with the language of a voting plan versus a voting pledge,” Herren-Lage said. She explained that some students believe they can just register and then show up to the polls to vote on Nov. 3. Having a “voting plan” is especially important this year because of added complications and potential delays caused by COVID-19 and funding cuts to the US Postal Service.

For example, the CDC has imposed maximum occupancy guidelines at polling locations. At the Lewiston Armory, a maximum of 50 people will be allowed inside at any given time. As a result, Bates Votes is anticipating long lines and lengthy wait times on election day. One way to avoid this is to request an absentee ballot. Another is to vote early.

Both Herren-Lage and Jhaveri are working hard to make students aware of these opportunities, from making classroom visits to meeting with first-year seminars to compiling resources that break down the impact of student votes.

Rotundo is a firm believer in connecting classroom learning to civic engagement; she believes it’s important for faculty to explain the relevance of what they are teaching in regards to issues being discussed on both the national and local level.

“When students see that connection, they’re much more interested in making change in the larger world,” Rotundo said.

Jhaveri is also hosting a Commons Quickbites series, where she talks to people about why they do or don’t vote. “Regardless of party, people feel frustrated, and it’s not helpful to shame people for feeling discouraged,” Herren-Lage said. “People have valid reasons for not wanting to vote; we want to make room for all opinions.”

Another goal that Herren-Lage and Jhaveri have is to encourage students to learn more about local elections, especially if they plan to vote in Maine. “We’re residents of Lewiston; we’re not just Bates College students,” Jhaveri said. “We need to engage in [Lewiston’s] politics, and [local] issues should be our issues. We’re voting as members of the community,” she added.

Herren-Lage shared a similar sentiment: “You have to understand [your vote] as a responsibility. What we do impacts the city.” She gave the specific example that “if you’re volunteering at a local school, you have to be aware that your vote shapes the school board.”

Herren-Lage and Jhaveri shared that the Lewiston city clerk and other parties strongly believe that the votes of Bates students matter. “The city clerk works so hard to make life easier for us,” Herren-Lage said. She attributed this to Peggy Rotundo’s long-term dedication to building this relationship and her involvement in local politics.

For students who feel frustrated or confused by the whole voting process, Herren-Lage said: “Please get in touch with us. Don’t let the confusion and frustration be the thing that stops you [from voting].”

Jhaveri added that there are many groups on campus that are committed to helping students. While Bates Votes is the only non-partisan group associated with the college, Jhaveri said “there are lots of people like us who have been trained who can help you navigate the logistics of voting.”

Because the process of registering to vote and requesting an absentee ballot differs across states, Bates Votes plays an important role in helping students navigate the process.

Rotundo’s biggest concern is that students get sent home and don’t receive their absentee ballots in time, leaving them disenfranchised as a result. “It keeps me up at night,” she said. However, she has been working with Post & Print to develop a plan of action if this were to happen.

The Power in Voting

Drawing on her experience as an elected official, Rotundo is determined to convey to students why their vote is so important. “If students really got out there and organized, it would push this country in a different direction. It’s your future, you have that power, that opportunity, and I just want everyone to take advantage of it,” she said.

“I don’t want anyone to give up this power that they have, or have their voices go unheard,” Rotundo concluded.

While international students at Bates are not eligible to vote in the presidential or local election(s), they can still become voting captains. “Voting isn’t the only way to be involved,” Jhaveri said.

Herren-Lage believes that “Bates should [also] be supporting civic engagement outside the US.” She pointed out that some students have to travel to consulates in Boston or New York in order to vote in their home countries, which poses an added challenge to casting their vote. Herren-Lage wonders whether the Office of Global Education may have resources to help support international students in accessing their right to vote.

Students can pick up voter registration cards at the library and Post & Print. Instructions are included with the cards, and once completed, they can be dropped into designated boxes at both locations. Bates Votes then ensures that they’re brought to city hall.

For students who want to register outside the state of Maine, it’s important that students mail their registration cards at least a week ahead of their state’s registration deadline.

Early voting in Maine opened on Monday, Oct. 5. Students who wish to request absentee ballots for Maine or other states can do so using the resources below. They can also reach out to Bates Votes coordinators Ashka Jhaveri ([email protected]) and Amalia Herren-Lage ([email protected]) with specific questions or concerns.