More than 100 Alums Participated in this Year’s Event 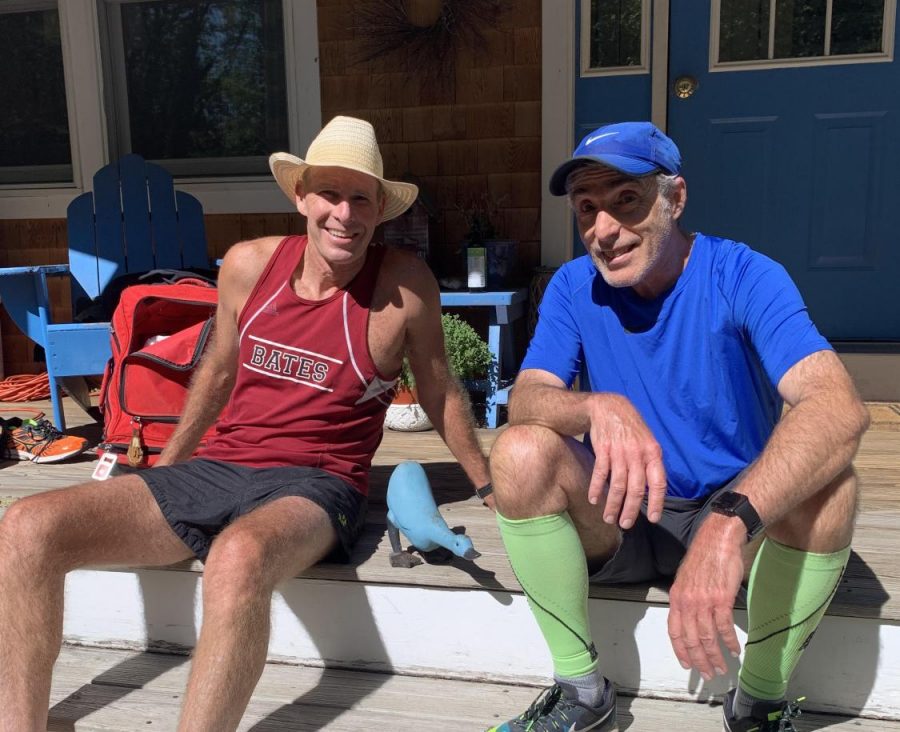 Paul Hammond ’82 and Albert Waitt ’83 relaxing pre-race. Hammond has raced every Alumni Meet except for one since his graduation.

Now in its forty-ninth consecutive year, the Bates cross country Alumni Meet has been a staple of both the men’s and women’s teams for decades. However, like most aspects of life during the COVID-19 pandemic, adjustments had to be made in order for the race to forge ahead.

In a normal year, the race is held during preseason. Alumni from both the men’s and women’s programs come from all over the country to run a course around the Bates campus, followed by a family-friendly barbeque. Graduates and current students get an opportunity to catch up about the survival of traditions from as far back as the 70’s and 80’s, exchange stories from races and classic runs, as well as the chance to visit the Blue Goose for a drink with old friends.

However, as with everything this year, the Alumni Meet looked significantly different.

“Alumni engagement helped a ton in terms of planning and putting on the alumni race,” head women’s cross country coach Jennifer “Jay” Hartshorn said. “It was a pretty easy call to do the race virtually as virtual races have been popular during COVID. I think we all had the same idea as we approached summer, but it was the alumni engagement office that called the meeting to try to move this to a virtual event.”

The meet, as put by head men’s cross country coach Albert Fereshetian, “was a great event and great opportunity for our alums to meet our team and for our team to hear from the alums who value our program so completely.”

Rather than bringing the alumni to campus to race directly against the current team members, the programs hosted a virtual 5k. Alumni competitors recorded the time on a phone or watch, uploaded the information, and submitted it to Coach Hartshorn via email. Current runners at Bates competed in small team time trials in order to abide by the current COVID-19 protocols on campus.

“We had 112 total cross country & track and field alums participate along with about 10 more friends of the program,” Coach Hartshorn said. “I was thrilled with the turnout. Turnout was fairly even between men and women.”

Members from 27 different classes spanning across four decades submitted times and attended a Zoom meeting with either the men’s or women’s team.

Given the success of the virtual platform, Coach Hartshorn is hoping that in the future, alumni will be able to submit their times for a more traditional alumni meet virtually if they are unable to make it to campus for the in-person race. She was also able to keep alumni updated on the results of the meet through the Bates cross country and track and field Instagram account, highlighting both alumni and current runners on its story.

“Without a doubt what people liked the most was following the Instagram story last week,” Coach Hartshorn said. “I know it helped get some teammates out there when they saw some friends had participated. I got a ton of Instagram messages during the whole week.”

She mentioned that the new virtual platform also enabled both her and Coach Fereshetian to figure out which missing alumni groups they needed to focus on. Coach Hartshorn noted that only a few alumni from the 90’s participated, as opposed to the larger groups from the 70’s, 80’s, and 00’s.

Looking ahead to next year, the Alumni Meet will reach its 50th iteration, a major milestone in Bates cross country history. Coach Hartshorn mentioned that going forward, the programs will try to maintain the virtual aspect of the meet. “It’s such a great way to keep alums involved who can’t travel back for the event,” she said.

She added, “That being said, best case scenario is that we can have our 50th [Alumni Meet] at Bates next year. The initial plans would be to have the race and then likely a larger event after the race versus the typical cookout. It was great to connect with alumni on Zoom in the afternoon, but obviously in person would be way better.”

Coach Fereshetian echoed these sentiments, adding that he would also like to see the virtual aspect of the meet be a continued feature, but that, “Hopefully we will be back to more normal operation procedures and we can celebrate an amazing tradition that this event is, but also the return to regular competition!”

After holding such a successful virtual meet, the 50th running of the Alumni Meet next fall is sure to be the biggest race yet with the newfound ability to mix in both in-person and virtual competition. Time will tell if that race will be held on campus come next fall, but all involved are cautiously optimistic for that future.