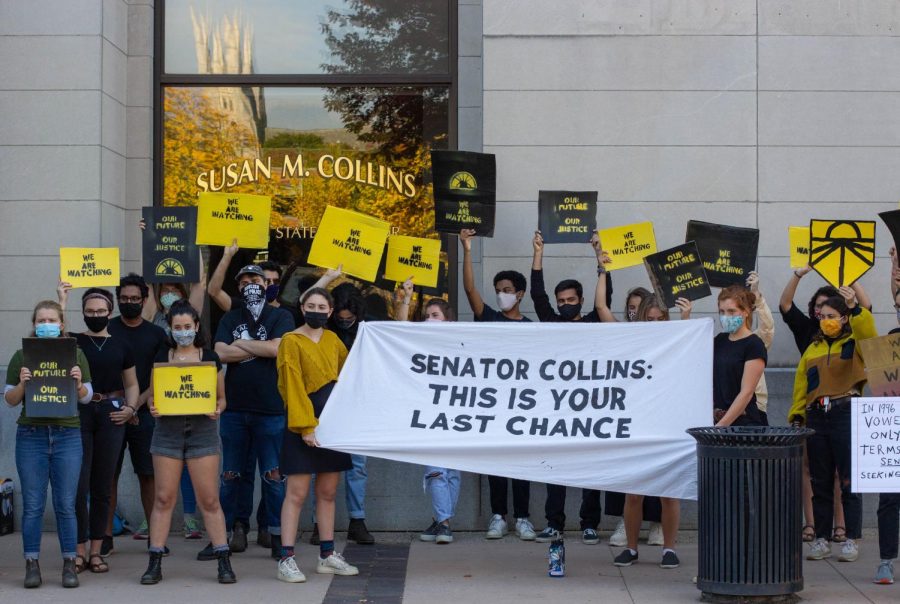 The Bates and Bowdoin chapters of the Sunrise Movement organized a march last Friday, Sept. 25, to Senator Susan Collins’ office to demand she upholds her promise to put off the vote on a Supreme Court nominee until after the next presidential inauguration.

“Sunrise Movement is more often than not climate action and climate justice, but they also know that you need to take an intersectional approach to any sort of justice,” said Ali Manning ‘23, a member of the Bates Sunrise Movement chapter and the media representative for the march. Sunrise Movement is a national organization that aims to mitigate climate change and create new jobs across the United States.

“Climate is obviously affected by race and class and age and gender,” Manning continued. This is why the Sunrise Movement chapters of Bates College and Bowdoin College led a march to Senator Collins’ office in downtown Lewiston last Friday, she said.

The march was considered a success by the leaders of the Bates chapter. Manning noted that the march coordinators had predicted that 20 Bates students would show up. In reality, about 60 Bates students were in attendance. Students from Bowdoin College and Brunswick High School also participated.

Sunrise only started planning three days before the event. Manning detailed the process: “Every night we got one step further to organizing this and getting it done…It was literally the night before, and we were still figuring it out,” she continued, describing how vital organization was, considering the pandemic. Maintaining social distance and wearing masks was required of march participants.

Abhi Agarwal ’23 spoke first outside of Senator Collins’ office in Lewiston. Agarwal spoke to the importance of holding Senator Collins accountable for the sake of all United States citizens. He spoke of the effects of climate change on the planet, US citizens’ ability to access affordable healthcare, the importance of LGBTQ+ rights, and more. Other speakers discussed similar topics.

Jude, a student from Brunswick High school, also spoke. Jude spoke about their experience as a queer person, and the Supreme Court’s role in returning due rights to the LGBTQ+ community.

Eric Fleischmann ’23 gave a speech that highlighted the values of democracy, declaring that “the Supreme Court is not as it is intended to be. It is not governed by the people. It is not beholden to the interest of the people.” Fleischmann called for the students and the general public to hold the supreme court accountable for their undemocratic practices.

Last to speak was Lena Soares, ’23. Soares spoke about the abundance of protesters who frequently stand outside the Planned Parenthood office in her hometown of Memphis, Tenn. She spoke about the general fear of Roe v. Wade being overturned if a new Supreme Court justice is appointed before the next presidential inauguration. Like Fleischmann, Soares pleaded that students take matters into their own hands. She said: “We control the narrative and this is our future to fight for. Power doesn’t belong to the politicians. Power comes from the people.”

Manning acknowledged the value of young people to the movement: “Sunrise is very much a youth-led movement. The majority are young people, and I think it thrives off of colleges, high schools, and local organizers who do things in their area.” Besides listening to speakers, march participants also chanted and held signs. Oftentimes, they were cheered on by the cars passing by. By the end of the event, students were confident that they had communicated their message.

This is only the beginning of the Sunrise Movement at Bates. Manning hopes that students will continue to voice their opinions, using the chapter as a resource. “I thought [the event] was really great,” she said. “Hopefully, it is a reflection on Bates students and our ability to get things done and to have people hear our voices in a safe and effective way.”