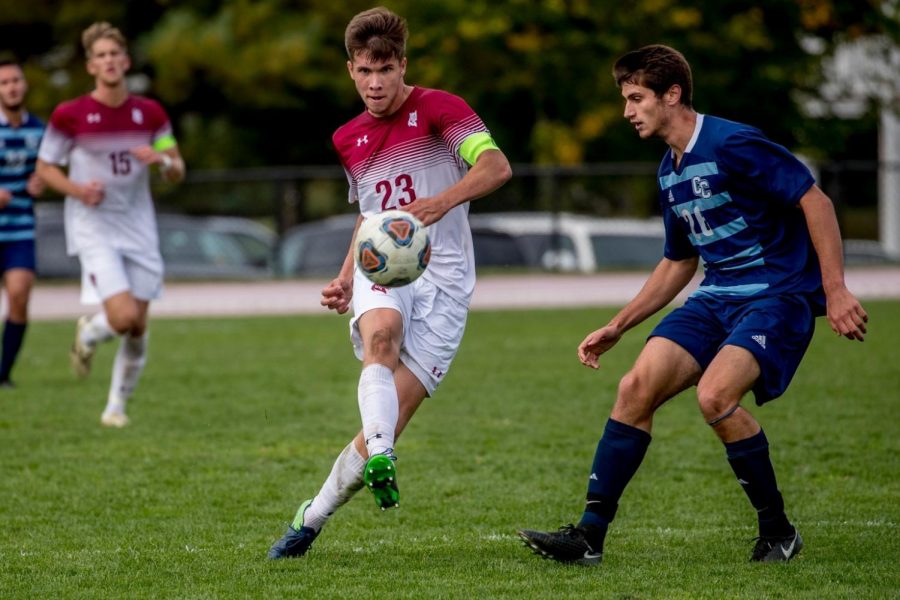 Peder Bakken '21 has endured his fair share of hardships during his career, but remains committed to building a winning culture within the Bates Men’s Soccer program.

Captain Peder Bakken ’21 has been an integral part of the Bates men’s soccer team ever since he stepped onto the field in 2016. Despite losing the opportunity to showcase what would have likely been an All-American final season, Bakken is committed to leading and supporting his team.

Bakken has been a starter on the field from the onset of his freshman year and has scored numerous game-winning goals throughout his career.  In his junior year, Bakken made Second Team All-NESCAC and led the Bobcats in points for the season, scoring eleven goals.

Head Men’s Soccer Coach Tyler Sheikh said that Bakken is the best men’s soccer player that Bates has seen in the past two decades. When Sheikh moved to Maine two years ago to coach at Bates, he was told by his assistant coach that Bakken was the first player he should speak to.

After a single conversation with Bakken, Sheikh said, “it was abundantly clear why he was the backbone of Bates Soccer. He makes sure to remind us often that our actions need to back up the brotherhood mentality. No one would ever question his passion for the Bobcats.”

Bakken has been captain since his junior season and has never wavered from his role as an outstanding leader. He has organized community service trips in the Lewiston area and got his team green dot certified.

“My most important role is probably just always having an open door so that guys can come to me with problems that they might be having on or off the field,” said Bakken. “The biggest thing that I’ve learned is that every leader is different, and you can’t try to be someone else. You just have to be authentic and honest with people and they will always respect that.”

Bakken suffered a devastating end to his soccer career at Bates. In the fall of 2019, just four games into what Sheikh said would have been an “All-American campaign,” Bakken sustained a concussion due to a freak accident in practice.

“It took me about three months to feel 100% again,” said Bakken. “I ended up taking a medical leave from Bates for that semester, which is why I’m back on campus to finish my last semester now.”

Sheikh said that Bakken’s injury was a “gut punch” to the team and “to see our heart, soul, muscle, legs, and leader out for an extended period definitely rocked us.” Bakken would have been one of the country’s top players had either of his two senior seasons not been taken from him, he said.

Sheikh is incredibly proud of Bakken’s willingness to keep moving forward and says he will always remember Bakken’s “team-first attitude and concern for a high standard.”

Although his concussion and COVID-19 snatched away his last chance to make history for the program, he found a new way to lead: “I came to Bates because it was where I wanted to go if I didn’t have soccer.”

His parents have been his biggest support system: “ My parents always supported me and pushed me to pursue my goals, even when things didn’t go my way, and I doubted myself.”

“It’s been the best four and a half years of my life so far,” said Bakken when asked about his Bates soccer career. “I definitely had some up and down moments, but I’m proud that the team got better and better over my four years.”

With respect to the memories that he holds most dear, Bakken added, “The most memorable on the field moments for me are definitely the games that we won in overtime.  My sophomore year we had to beat Colby to make the NESCAC tournament, and Beaufils Kimpolo ’20 scored with 20 seconds left in the second overtime to win it. That was the most exciting moment of my Bates career.”

“I’m probably most proud of the fact that I feel like this program is in a better place now than when I arrived,” Bakken said. “On the field, our results speak for themselves, but I also feel that off the field the team is closer knit now than when I was a freshman. I can’t wait to see them do better and better in the years that follow.”