Round 1: Previews, Thoughts, And Predictions Ahead in First Presidential Debate 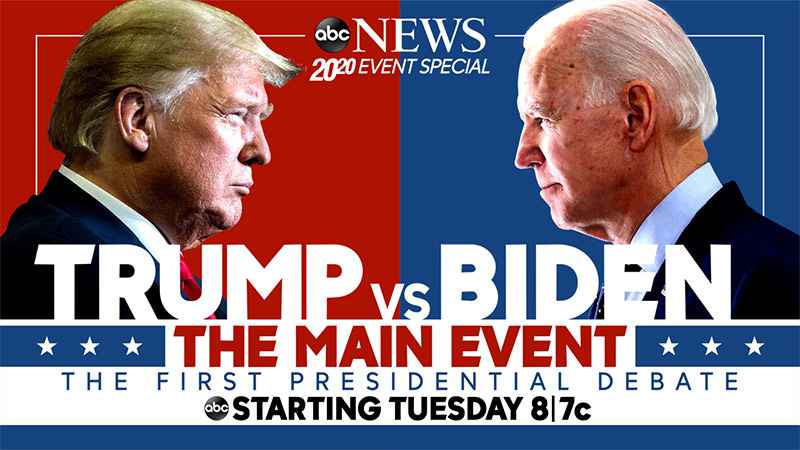 The moment has arrived! The first of three presidential debates between incumbent President Donald Trump and former Vice-President Joseph Biden is here. It has been a rollercoaster of a presidency for Trump, and many of us can’t wait to see him thrown out of the Oval Office in November. But it’s not that simple.

Both Trump and Biden have significant backing in both of their respective campaigns and support groups. Trump’s strong stance on promoting American values, a working economy, and well-funded military make him a formidable candidate. Meanwhile, Biden is trying to deem himself as the “last chance” candidate, with his support in the middle-class and the poor, more focus on education and social services, and attention toward ending gun violence across the country making up his platform.

Historically, the first presidential debate is the most watched out of all of them. Why is that? Well, this is the first time when the candidates clash over issues in front of the nation.

Over the course of American history, we have had some historic debates. For example, back in 1960, John F. Kennedy squared off against Richard Nixon and the debate set a precedent for generations to come as a highly publicized event. In the years that followed, America has also witnessed the historic clashes of Ronald Reagan against Walter Mondale, Bush vs. Clinton vs. Ross Perot, and of course the infamous Donald Trump and Hillary Clinton debates. All of these debates attracted millions of viewers.

Specifically, despite all the chaos and the inflammatory rhetoric in the first Trump vs. Clinton debate, it attracted the most viewers in history at an estimated 84 million. How many viewers will Trump and Biden bring tonight? With both of these candidates making their first attempts to convince the American people why they should be elected, let us take a step back and analyze both Biden and Trump’s qualifications.

Biden has had a long career in politics and government. First elected as a senator from Delaware at the age of 29, Biden went on to represent his state for six terms in the Senate. During his 36-year career, one of Biden’s most impressive accomplishments was creating and passing the Violence Against Women Act in 1994.

Biden has been always a strong advocate for supporting victims of crime, and under President Clinton’s administration, he was able to support women who had suffered from physical and sexual violence. In fact, after the passage of the Violence Against Women Act, domestic violence rates decreased by over 50%.

Working with President Obama for two terms as Vice-President, Biden strove to provide more stability to middle and working class individuals with the passage of the Affordable Care Act. Through the ACA, more colloquially known as Obamacare, Biden wanted to ensure that healthcare could be affordable and accessible to Americans, especially in dire circumstances.

When mentioning healthcare, Biden has often referenced his personal tragedies; with the unfortunate death of his first wife Neilia Hunter and infant daughter in a car accident, as well as his son Beau’s passing of brain cancer, Biden has a strong connection with healthcare. Additionally, Biden’s moderate stance on adding a public option for the Affordable Care Act would serve as an optional alternative plan for people’s health insurance, unlike “Medicare for All.” Especially as the coronavirus continues to impact cities and communities across the country, Biden wants to enable better healthcare coverage as he believes that Americans shouldn’t have to pay out-of-pocket costs to receive treatment and the upcoming vaccine.

Furthermore, another strong component of Biden’s resume is his bipartisan record and public outreach. This component, I believe, will be a critical point for Biden to bring up in the first debate. Biden’s attachment to the middle and working class is key if he is going to appeal to a wide audience.

Additionally, Biden’s long experience as a politician in American government will be important if he is going to separate himself from Trump. Especially in his time working with President Obama, Biden has been on the national debate stage before. Unlike Trump, many people would argue that Biden has a less abrasive personality.

Throughout his term in office, President Trump has been known for his hawkish leadership skills and policies. One of Trump’s most infamous policies has been establishing a travel ban on some Middle Eastern countries which many have criticised as a “Muslim ban.” Back in June of 2018, Trump successfully banned those from seven Muslim-majority countries from entering the United States, and despite controversy, the ban was upheld in in 5-4 Supreme Court decision.

This ban was an attempt to harden America’s stance on immigration. Especially over the past couple of years, Trump has had heated conversation with Democrats over Deferred Action for Childhood Arrivals (DACA) as well as how to address undocumented migration. Trump believes that immigrants “pour into and infest our country.” This racist and xenophobic rhetoric has been a main component throughout his presidency.

While these types of inflammatory comments usually would sink a politician, they have instead solidified Trump’s platform as well as energized his supporters. Furthermore, Trump has regarded other nations such as Haiti and other African countries as “s***hole countries.”

While the White House claimed that the President did not say those words, Trump was also recorded saying “Why do we need more Haitians, take them out.” The amount of bile and race baiting that Trump has done over these past four years has been appalling. But the question still remains: why do people continue to support him?

Even though people might overlook this, Trump’s policies haven’t all been universally destructive. The one component of Trump’s policies that has actually worked is his focus on the economy. For many American politicians, the economy is a central part of their platform, though it is also often a huge liability to their careers. Trump, on the other hand, has made it clear to the national public that he is proud of the work he has accomplished around the economy.

Specifically, President Trump believes that “The United States is in the midst of an economic boom the likes of which the world has never seen before.” Now, let’s see if that’s true.

Much of Trump’s success has been from Obama’s economic policies during his administration. After the Great Recession in 2008, President Obama helped stabilize the economy by passing a large stimulus package in February of 2009 called the American Recovery and Reinvestment Act. During Trump’s administration, the GDP growth has been around 2-3%, though it has since been halted due to COVD-19.

Additionally, Trump has done well with wages and unemployment. Before the pandemic, President Trump continued President Obama’s success of having the lowest unemployment in half a century at 3.5% in December of 2019. In fact, Trump had successfully raised the value of wages over 3% before slowing down again. So if there is one aspect that Trump can feel genuinely comfortable talking about during the debate, it’s the economy.

However, the debate is not only going to be about just one thing. Specifically the first debate will focus on six topics: Trump’s and Biden’s records, the Supreme Court, COVID-19, the economy, race and violence in American cities, and the integrity of the election. Both candidates will have their moments to convey to the nation their positions and messages, while also trying to attack the other person’s record. Especially with Trump, we don’t know what he is going to say or how he is going to say it.

While I am not predicting that Trump is going to win this debate, Biden isn’t exactly the most polished debater. There is a difference between knowing issues versus knowing how they impact people’s lives. With all things considered, I am predicting that Biden will be the winner of this first debate but not without some heavy blows from Trump. If you can, tune into the debate tonight at 9 pm EST. It will certainly be one to watch.