Collins? Gideon? What do Students Think? 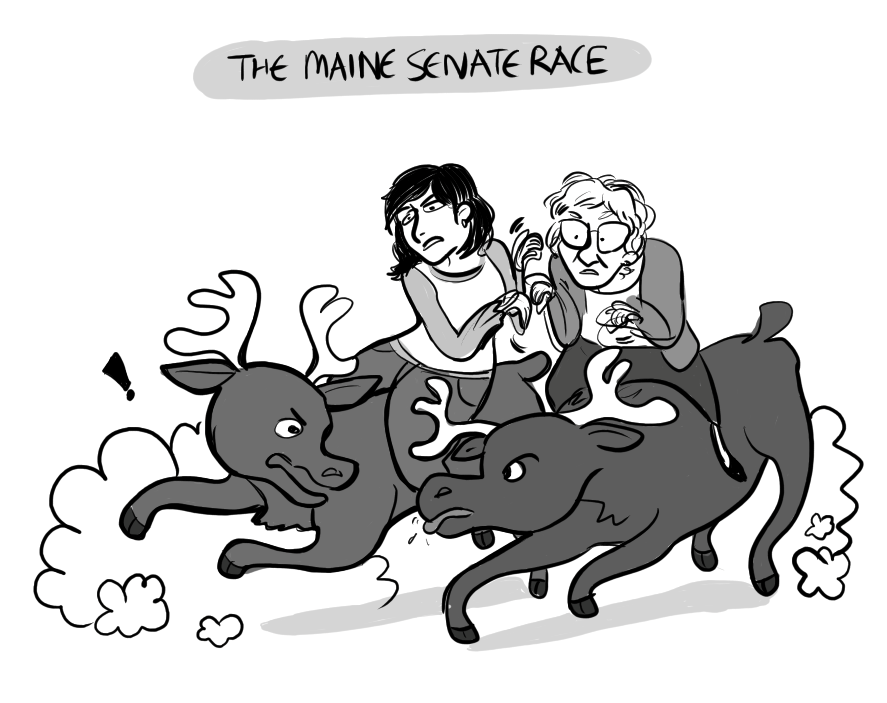 Ever since the day that you’ve come back to campus, you have probably had a variety of conversations— some memorable, some less so. Perhaps you have already commented on the absolute perfection of the apple crisp and banana chocolate chip muffins from Commons. Or maybe you’ve talked about how smart that guy is from your first-year seminar. Or perhaps you’ve complained about the intensity of the two-module system and you’re hoping that things go back to normal soon.

Whatever it is — whatever you’ve been talking about — I’m sure one of those conversations had to do with politics. While the Presidential election has emotion across the country running high, Bates students have also been paying close attention to the contentious Maine Senate race.

Sara Gideon, who has been a Maine State Representative for District 48 since 2012, is running against 23-year Senate incumbent Susan Collins. While Collins was favored earlier in the year, recent polls show Gideon is ahead. The Boston Globe-Suffolk University poll shows that Gideon is leading by five points and the RealClearPolitics polling average says that Gideon is up by six points.

With just 40 days left until the election, time is ticking faster than ever, and now is as good a time as any to learn more about the race and to hear about what other Bates students are thinking.

Daphne Valen ’23, president of Bates for Biden, responded via email for an interview. Throughout these past few months, Valen has been phone-banking for Sara Gideon and Joe Biden. In her email, Valen described one personal aspect that has motivated her: watching the “perceptions of the United States go from the world viewing us as a city upon a hill, to now, Trump’s American carnage.”

“This Senate race is bigger than Bates, and even the state of Maine,” Valen said. “It’s not about Republican versus Democrat anymore, it’s about our future as a country, which, yes, transitively affects us as students and soon-to-be graduates. We are quite literally in a battle for the soul of our nation right now.”

Valen spent a year and a half researching and writing a thesis about how President Trump is putting diplomacy in danger and affecting international perspectives of the United States. She likes Gideon because of her integrity, decency, and how she is “truly for the people of Maine and our country.”

In another email, Quinn Troy ’22, president of Bates College Republicans, explained why he’s rooting for Collins.

“I like Senator Collins because of all the work she does across the aisle,” Troy said. “She’s consistently ranked the most bipartisan Senator in the country and I think someone who’s willing to not let a party label define them is important to have in legislation.”

Collins is greatly respected for her work ethic and moderate views. Gideon is admired for her liberal viewpoint and her promise. Troy explained one key difference between their supporters.

This seems to be the question on everybody’s minds. Sarah King ’21, president of Bates College Democrats, emphasized that Maine is “very, very, very, very purple.” A swing state at its finest.

King expressed similar views to Valen. In a Zoom interview, King described some reasons why she aligns more with Gideon than Collins.

“I think Sara will hold large corporations accountable, closing tax loopholes, focusing on taxing those in extremely high brackets more, distributing wealth, prioritizing having everyone comforted in some way, shape, or form with health care,” King said. “I think she’ll tackle wealth inequality, making Medicare more accessible, expanding upon the Affordable Care Act instead of trying to dismantle it. She addresses climate change much more substantially. She’ll make Maine a more equitable state than Collins ever would.”

Roy Mathews ‘21, one of the previous leaders of Bates College Republicans, described his support for Collins, but also explained why he cares. Mathews is from South Carolina, but he’s been working for political candidates in Maine, including Collins, for the last five years, and has learned a lot about Maine and Lewiston through these experiences.

One plus for Collins is that she has years of experience in office, Mathews said. Gideon is from Rhode Island and moved to Maine within the past twenty years. Collins has been in office for 23 years and she’s lived in Maine her whole life, he noted.

“Just this week, she brought in about 250 million dollars in relief to the lobster industry,” Mathews said. “She’s worked to repeal some of the tariffs on Trump that she voted against. She passed the paycheck protection program. She has been the most consistent and Independent voice that Maine has had.”

Mathews also described why other people may lean towards Collins too — specifically Lewiston residents.

“The reason Trump won is 2016 is because he appealed to those blue-collar white people in places like Lewiston who have been told for years that they’re racist, that they’re evil, that climate change can make their jobs obsolete and that they should just go away,” Mathews said. “People in Lewiston want jobs, security, and just to be left alone. They want to be able to live their American dream, take care of their family, and die with dignity.”