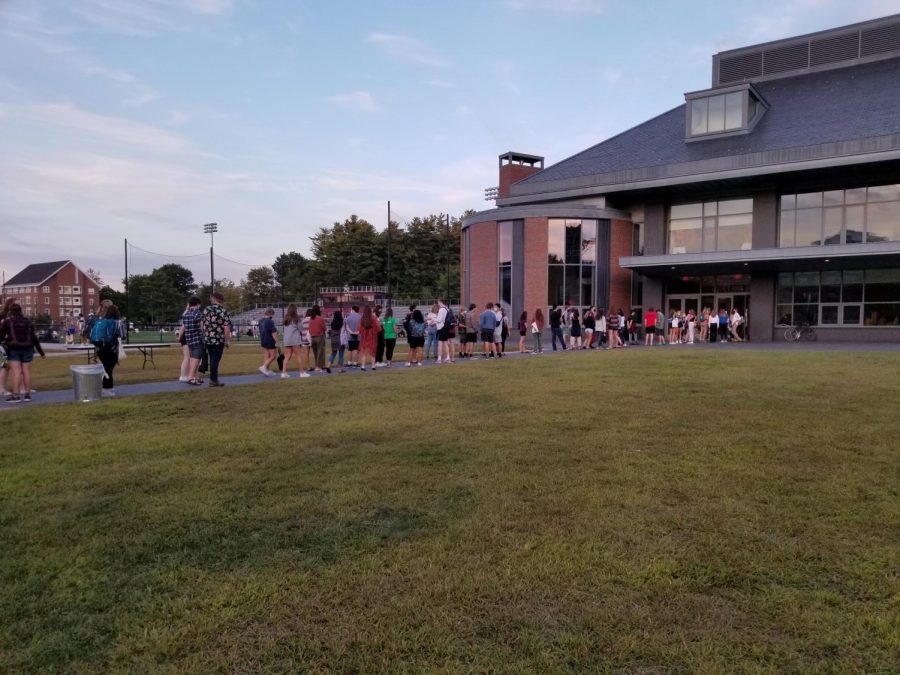 Have you ever been so hungry that you just turn into a jerk? Regardless of whether you’re an athlete who has just finished practice, a library marathoner who hasn’t seen the sky in a couple of hours, or just your average student with a high metabolism, you know that Commons answers when your tummy starts growling.

With COVID bringing Bates to an altered schedule, Commons now encourages students to space out their meal times and has extended their hours. I give all credit to the hard workers at Commons for doing so because it shows that they’re still doing their best given COVID while having a couple thousand hungry young adults on campus. That being said, for all those who have waited in those lines stretching from the hot food bar to Bardwell street, this vent is for you.

Queuing for food in the modern world was the terrific invention of past leaders like Nikitia Khruschev but has been perfected by more modern leaders like Hugo Chavez, Nicolas Maduro, and Raul Castro. If you’ve waited in line for Commons food these past couple of weeks, then you’ve actually been lucky to live out history!

Commons does not hand out times where each student must line up or not get food, but the wait times put central planning at center stage. In Venezuela, the government is smart enough to give its citizens time off work to queue in lines for their food, groceries, medicine, and anything else they might need. I would like to see my thesis advisors assign less work so that I may queue in Commons’ lines for dinner, but maybe that’s just a pipe dream.

One BBC correspondent set out one Friday morning in Caracas, Venezuela to see how long it would take to purchase soap, milk, toilet paper, and a few other essentials. It only took him six hours to find three of those products.

This is because the Venezuelan government determines what a salesperson can charge for a product. The government doesn’t subsidize the product to make it more affordable but fixes the price at what they determine to be fair. This had led to many queues throughout the country where citizens have sometimes waited for days on end for basic essentials. That might not be the same as that chicken patty at dinnertime, but let’s spare a thought for the queuers in Cuba.

If you’ve waited thirty to forty minutes for that sometimes socially-distanced Commons dinner line to move, imagine setting up your hammock and camping out for the night to keep your spot. Instead of paying Bates for the ability to be put on the meal plan, imagine trading in your family pet as payment. Only ninety miles off the coast of Florida, Cubans are no strangers to long queues for food. In the La Timba neighborhood in Havana, one woman woke up early three days in a row in order to keep her spot in line to buy food at a government supermarket.

“There is nothing to buy online…only rum, spaghetti, and peas. There’s no meat or toiletries,” exclaimed one woman who asked not to be identified out of fear that Raul Castro’s government would retaliate against her. Many economists point to Cuba’s six-decade failure with central planning, where the government controls all sectors of the economy and struggles to fulfill even basic needs of its people from food to healthcare. A universal rationing system, created after The 1959 Cuban Revolution, ensures that every Cuban gets some of the almost 70% of food that the country imports, despite possessing vast tracts of fertile land and a tropical climate. The Commerce Minister, Betsy Diaz, chided those Cubans who “hoard products” for the shortages, saying that some people kept items they felt would disappear. It’d be like going after Bates students for keeping leftover food in their rooms, just in case they didn’t feel like queuing in the Commons line.

Luckily at Bates, we have something that central planners and those that turn to the government to fix everything hate: options. Commons being open for extended hours on the weekends mean all those folks who need to sleep off the alcohol or late-night study habits can easily load up on food for multiple meals and just live off those if the dinner line’s length is too Castro for them.

For those of us who find ourselves waiting in the Commons line at the high point for dinnertime at Bates, spare a thought for those millions queueing for their basic essentials in Venezuela and Cuba. Waiting for half an hour in line for dinner at Commons rush hours is a good reminder that we should all be thankful for our food here at Bates. The added experience of queuing for food also gives Bates students a P.G. look into what millions of people do in Venezuela and Cuba every day, and the abject failure their central planning schemes are.